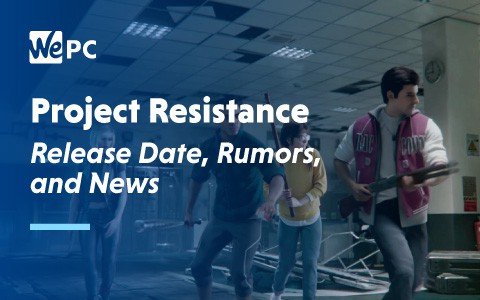 Although this won’t be counted as a core game in the Resident Evil series, we’re still hoping for the same level of polish and survival horror.

The unfortunate news is that Capcom still hasn’t confirmed a release date for Project Resistance. Apparently the title will be playable during the Tokyo Game Show which should mean it’s pretty close to being release ready. Only time will tell, but we wouldn’t expect it to drop until late 2020.

Update: We now know that Project Resistance will release alongside the Resident Evil 3 Remake on April 3rd, 2020.

The official teaser trailer gives us a short cinematic clip of the kind of action we can expect. A group of people start to face off against a horde of zombies with frantic melee and gunplay at hand. The combat appears a lot faster than we’re used to in the Resident Evil franchise and the horde of foes look especially spectacular. There even appears to be a large boss at the end…

Project Resistance: What Do We Know?

We know that along with the multiplayer aspect, Project Resistance will also feature an offline mode that players can run through. There isn’t a lot of information on this as of yet but we will likely hear more during the Tokyo Game Show.

Four players will go up against an unseen ‘Mastermind’ as they try to escape. The survivors will have to work together to escape while staying alive. Each character will have special traits such as Tyrone’s ability to take reduced damage and Valerie’s ability to heal other survivors. This will make for an interesting team-based game where splitting up the survivors using traps will be sure to cause headaches.

The Mastermind, on the other hand, controls the action from a series of CCTV cameras, setting traps and placing creatures to thwart the survivors’ attempts to leave. My favorite action is that the Mastermind can turn off the lights – the last thing you need while being chased by the undead! From the gameplay trailer, we can see some of the action unfold, along with a prominent timer on the top of the screen.

The Mastermind will also be able to directly control the zombies as well as lock doors to split up the survivors. The trailer also shows the ability to “become the ultimate threat” in what appears to be a behemoth zombie with its own ability set.

Project Resistance will be releasing on Playstation 4, Xbox One and PC as well as a closed beta test that will be coming soon.

Fans of the Resident Evil franchise will surely enjoy this title, with its survivalist elements and bloody gore, the action will be intense. Similar to Dead by Daylight, fans of survival horror are going to enjoy the survivalist co-op aspects but with the Mastermind seeming like the most interesting role to play, you might have to wait your turn!