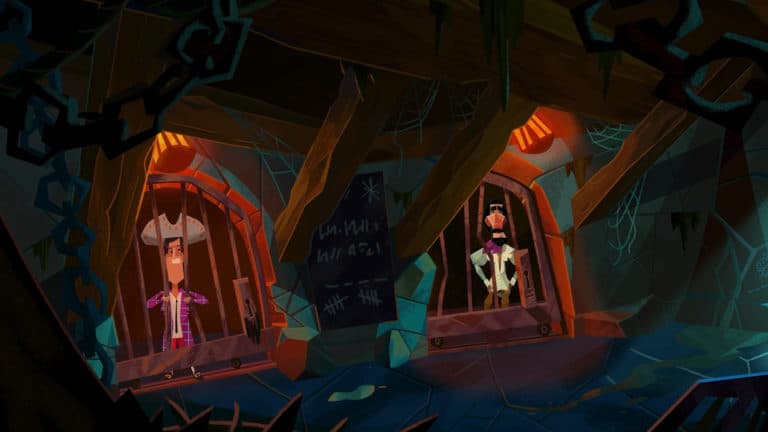 Table of Contents hide
What Is Return To Monkey Island?
When Is The Game Releasing & On What Platforms?

It’s been twelve years since we last saw anything from Monkey Island. One of the most beloved point and click adventure games of all time just vanished without so much as a trace. That is until this year, when Return To Monkey Island was announced. We’ve got all the details on the return to the beloved world of pirates for you, release dates and treasure abound so read on for more information, mateys. We’d have other various pirate based puns here but honestly they’re all too hARRRRRRRRRRRRRRRRd.

What Is Return To Monkey Island?

Monkey Island is a cult classic series of point and click games that put you in the shoes of the most useless pirate in the world, Guybrush Threepwood, who wants to become the most notorious and known pirate in the entirety of the Carribbean. The issue is he also has to contend with the evil undead pirate known as LeChuck and his one true love, Governor Elaine Marley. The games are loved for the way they seamlessly blend humour in with wonderfully immersive gameplay and the fact that they are primarily games created to make you laugh. The games are often breaking the fourth-wall and making direct winks to the fact that they’re actually in a video game. As the Steam pages states, this is set years after the previous games in the series, with events having moved significantly on from what players might remember from previous titles in the series:

“It’s been many years since Guybrush Threepwood was last locked in a battle of wits with his nemesis, the zombie pirate LeChuck. His true love, Elaine Marley, has turned her focus away from governing and Guybrush himself is adrift and unfulfilled, having never found the Secret of Monkey Island. Hip, young pirate leaders led by Captain Madison have shuffled the old guard from power, Melee Island has taken a turn for the worse, and famed businessman Stan has been imprisoned for ‘marketing related crimes’. Banter with old friends and new faces on familiar islands now under dangerous new leadership. Then, take to the high seas and explore the new and unknown as you work your way out of tough predicaments. Clever puzzles, bizarre situations and devastating ripostes are all that stand between Guybrush and glory.”

There was also a brand new gameplay trailer at the Nintendo Direct Mini Partner Showcase as you can see in the video above, that shows off returning favourite mechanics and some interesting new ones too.

When Is The Game Releasing & On What Platforms?

Return To Monkey Island is currently slated for release later this very year but doesn’t have an exact date other than 2022. While it is apparently coming to other consoles later, the first console that Return to Monkey Island will be launching on is the Nintendo Switch. You will however be able to play the game on your PC via Steam, so you’ve at least got that option until the game comes to other consoles at a later date.