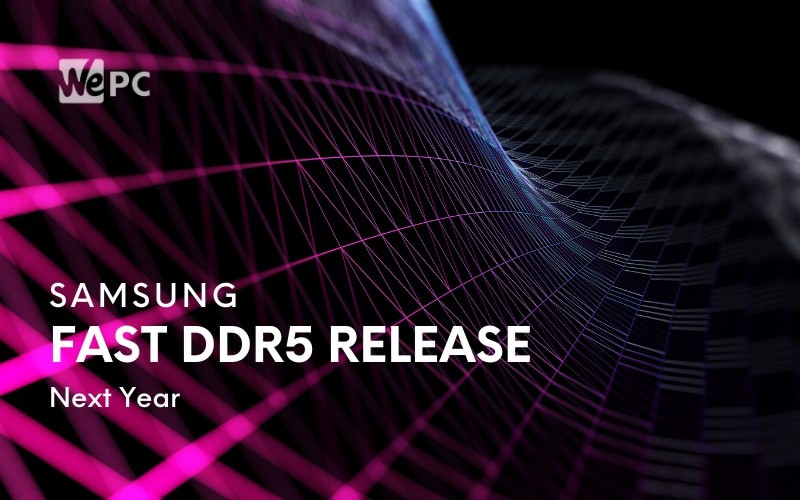 According to Samsung, their next-generation DDR5 system memory is due to make an appearance sometime next year.

Samsung recently announced its first EUV-based DRAM – D1x. These are DDR4 chips which will eventually lead on as a precursor to EUV-based DDR5 products from next year.

Extreme Ultraviolet lithography or EUV is a lithographic technology that reduces silicon manufacturing complexity. This means that manufacturers can simplify their lithographic process by using shorter wavelengths of light.

What Do We Know About Samsung’s Next-Gen DDR5?

The governing body, JEDEC has announced a density increase per chip which should mean that manufacturers can get more memory squeezed into a product in time for DDR5 to arrive.

We know that DDR5 will double the data rates available from what we get with DDR4 which should be good news for anyone looking to upgrade their memory next year.

Who Will Be Using DDR5?

It looks like some manufacturers are making use of EUV technology such as TSMC who make Nvidia’s Turing GPUs and AMD’s 7nm line. However, it looks like AMD will instead focus on DUV (deep ultraviolet) to produce their enhanced 7nm node for Zen 3 and RDNA 2.0 in the future.

Intel also appears to be committing to DDR4 with their next-gen Intel Rocket Lake CPUs. So, while the news from Samsung regarding DDR5 is interesting, we’re not sure where it’s going to find a place when it’s released next year.

Micron, a memory manufacturer will be sampling DDR5 registered DIMMs. However, these are used for server racks rather than for ordinary gaming PCs. It could be that Samsung goes down the commercial route with DDR5 until the demand for it picks up in other areas of the industry.

It’s hard to tell what the future will be like for DDR5, but we are here to keep you updated should we hear any more news between now and Samsung’s planned release in 2021.