Get digging with these earthy Switch Online newbies 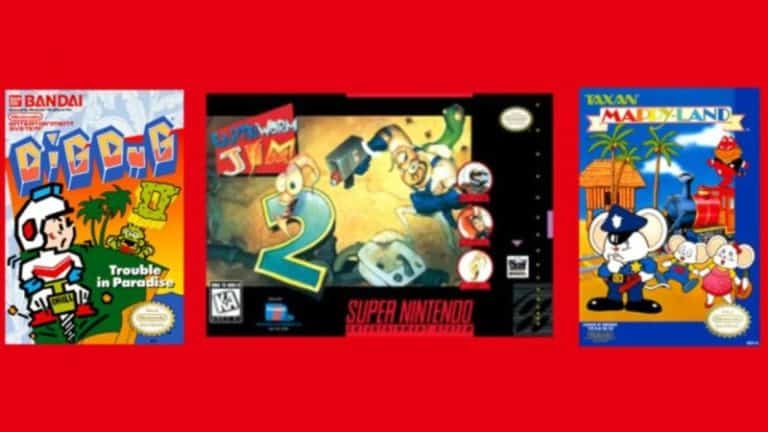 As of March 31, 2022, the three new games join the likes of Super Mario Bros, Metroid, and Donkey Kong Country on the Nintendo Switch online service. Owners of a Nintendo Switch Online membership can play the games as part of their subscription, and have access to hundreds more classic games to boot.

Dig Dug II: Trouble in Paradise was released to the NES in 1985, a follow up to the popular arcade game Dig Dug. Fans of the original Dig Dug will be familiar with the characters in its sequel as you return as protagonist Taizo Hori, trying to avoid the deadly attacks of Fygars and Pookas. However, the gameplay is unfamiliar sight to those who have only played the first Dig Dug, as Trouble in Paradise brings a new top-down view to the game, changing the mechanics completely. Instead of digging below ground, you will instead need to cleverly divide the land, causing the island’s cliffs to plummet into the sea – and your foes along with it. But be careful not to be standing on unsteady ground yourself.

Retro gaming fans will instantly recognise Mappy the police mouse from his original game, 1983’s Mappy, as he returns in this adorable sequel Mappy-Land (NES, 1983). Like the original Mappy must avoid Meowkies (for obvious reasons), as he carries out various tasks, such as collecting cheese for Mapico, and baseballs for Mappy Jr.

The third and final game, and another sequel, is Earthworm Jim 2. This SNES game may be more familiar to younger audiences, as Jim was introduced to the world a decade on from Mappy and Dig Dug. Released in 1995, Earthworm Jim 2 sees the titular hero return to chasing after Princess What’s-Her-Name, saving her from Psy-Crow (because, don’t worry, she survived that ending from the first game).