Splitgate stats of 2021: Over 15 million downloads in its debut year

How did Splitgate fare in 2021? Pretty well we must say. 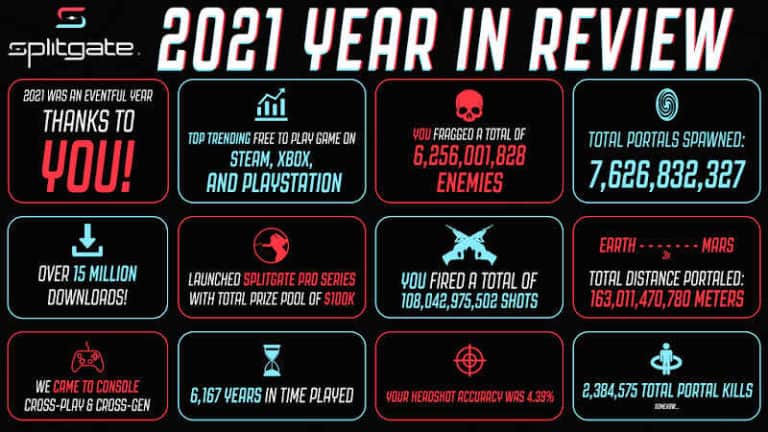 Splitgate is undeniably one of the rising stars of gaming in 2021. From a small teaser in E3 2021, to dropping in beta and becoming an instant hit on PC and Consoles. It is safe to say that people enjoyed Splitgate. To back it up, the developers, 1047 Studios, released the 2021 Splitgate stats detailing the successes of its first launch year.

The developers released a Splitgate year in review video on YouTube, going through the successes and accomplishments. Moreso, there is now a publicly available infographic, giving us insight into the game’s first year.

The most profile stat amongst them is the downloads. Over 15 million gamers worldwide downloaded Splitgate, regardless of whether they are playing on console or PC platforms. The developers embraced cross-play and cross-progression from day 1, making the game accessible to all gamers. Combine this is with its Halo meets portal motto, and it became a classic. It’s easy to see why it got so many downloads and was received so highly, especially over the summer.

In the fun department, the devs worked out the Splitgate stats for portal travel distance is three times the difference between Earth and Mars. Also, the devs conclude that its player base has a global sub 5% headshot rate. Maybe next year we can make those numbers much better ;).

The path of its success continued as the game got more and more popular. By the end of summer, the developers dropped the Splitgate’s first season, while the devs announced continued funding support to really build upon the game. There’s no dobby that plenty of the 15 million players will come back for more, especially with the developing esports scene, the potential for BR games (if they get it right) and more.