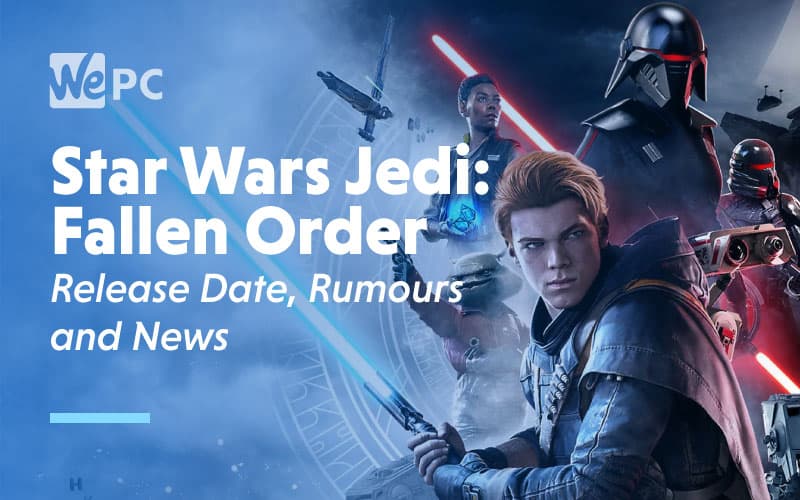 This year’s E3 played host to some incredible news within the technology industry; Ryzen’s new 3rd gen processors, AMD’s Navi GPU range, and Nvidia super graphics cards. However, something that slipped under the radar was the first look at Respawn’s new Star Wars Jedi: Fallen Order game. The game was showcased in front of a packed crowd that was treated to trailers and an extended gameplay presentation which displayed the new game in all its glory. If you’re like me, a huge fan of Star Wars, you’ll be happy to know that the wait for the next chapter, is almost over.

Star Wars Jedi: Fallen Order will be released on both PC and console on the 15th of November 2019 as confirmed by the Star Wars Celebration Panel.

That date isn’t too far away, and overeager fans of the franchise will be pleased to hear they can already pre-order the game through Origin. The game has two editions: A standard edition and a deluxe edition. The latter includes some additional features such as extra cosmetic DLC and some behind-the-scenes content.

You can pre-order it here:

The main character is Cal Kestis, a young force user and promising Jedi who is the hero of Star Wars Jedi: Fallen Order. Cal has survived the first wave of the infamous Order 66. However, he is now on the run in plain sight and will have to use his powers to deter any potential hazards that get in his way. He is accompanied by his trusty robot, BD-1, who we first see swimming towards a pair of semi-submerged AT-ATs. Tie fighters fly overhead as you carefully swim underneath the giant metallic beasts. It displays a bitter atmosphere that showcases a world where the empire is at the height of its power, and the Jedis are in hiding.

The game is set in a dark time following The Revenge Of The Sith where Cal, our hero, is hunted by the Second Sister. Don’t be confused with the Seventh Sister from Clone Wars. The second sister is another powerful figure that, according to Respawn’s Vince Zampella, has “enough power to control the flight stick of Cal’s escape ship remotely” meaning she’s going to be a real hand full.

We meet Cal on Bracca, a new world introduced into the Star Wars universe by Respawn, where he meets a wide cast of characters as he runs from the Empire. One of the more intriguing characters is Cere, a former Jedi Knight, who helps Cal in certain scenarios. Purge Troopers are also hunting Cal. For those that are unaware, Purge Troopers are an earlier version of the Dark  Troopers we see in the Rogue One film.

Cal and the other Jedis must try and regroup before the Empire’s grip on the battle becomes too tight.

I feel like Respawn has taken a hard look at what Star Wars fans want, especially when referencing gameplay, and have tried to incorporate those factors as heavily as possible in this latest version. Respawn has given us a look behind the curtain into how that’s going to look for Fallen Order. Intriguing terms such as “thoughtful combat” and “Jedi melee combinations” are being thrown around like no man’s business.

Taken from a press release, Respawn has been quoted saying “Players will use their Jedi training to create different melee combinations with innovative lightsaber combat systems and force abilities. Players will also use traversal and other platforming abilities to strategically overcome opponents and solve puzzles in their path across this galaxy-spanning adventure.”

Older games saw lightsabers cut through stormtroopers like a hot knife through butter. However, the same can’t be said for Fallen Order. You will, however, be able to slice up non-humanoid baddies like droids and giant spiders none the less.

Another change in the pattern is how Respawn has taken away the choice to become good or bad. In older versions of the game, gamers are usually given a choice (somewhere along the way) to switch from the light side to the dark side. However, Cal seems to be a true light devotee in this rendition, and you are no longer given this option.

Developers have confirmed that you will no longer be able to choose Cal’s conscious path for reasons which probably relate to the Fallen Order’s linear gaming experience. This means branching storylines probably won’t suit the game as they would like.

The game’s description gives us plenty of information about Fallen Order that wasn’t revealed at Celebration. Firstly, even though Respawn has confirmed that the game isn’t an open-world game, the description promises that you will have the freedom to decide when and where you go next; which is pretty cool. Furthermore, your force powers will be able to open up new ways to explore and re-traverse areas you have already visited.

It’s not all Jedi combat scenes though; there will be plenty of puzzle-solving and challenges to overcome during your journey through the galaxy.

Each planet you venture to will have a landing zone for your ship where you can rest up, save your game, craft upgrades and upgrade Cal’s abilities. Additional save points can be found in each world; however, using these will respawn minor enemies in your area.

Your healing ability is similar to that of Dark Souls where your trust droid has healing canisters which get replenished at each save point. As you go around gathering resources, you can upgrade the number of canisters the droid can carry. Respawn has also promised cosmetic upgrades to your droid and ship as you get deeper into the game.

If truth be told, Star Wars games over the last couple of years haven’t had the best track record. However, Respawn may have just resurrected the franchise in great style. And yes, I said may.

The main pros, for me, are the combat scenarios. It’s the main draw from what I can tell and mowing down enemies with your lightsaber in true Jedi style is a real joy.

However, the linear game experience and not being able to choose your character’s true path is something that may deter a lot of people when it comes to the release date.

Ultimately, it’s another piece of the Star Wars pie, and if you’re anything like me, you’ll be in the metaphorical online queue come the 15th of November with a copy of Fallen Order in your hand, ready to explore the next Star Wars chapter.