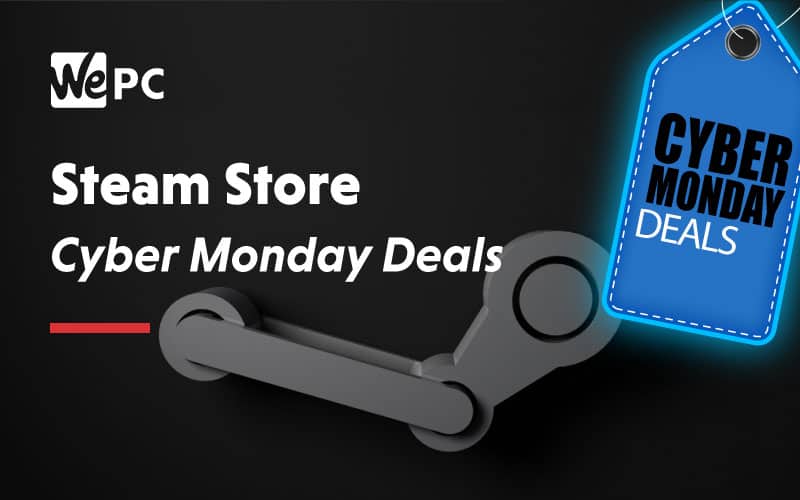 With Black Friday coming to a close, the stage has now been set for Cyber Monday to take over. That’s right folks, the deals don’t end here, we have another three whole days of savings to get our teeth into! Gamers will be pleased to hear that Steam will be continuing their deal free-for-all across a whole plethora of titles and we’re here to showcase the best and biggest saving they have to offer.

Having said that, let’s jump into what we can expect from this year’s Cyber Monday feast!

Don’t forget to check out some of our other Cyber Monday deals pages that already have some fantastic deals live right now!

It’s the time of year where PC gamers across the globe scour gaming clients to try and snap up a red hot deal on their favorite games. Steam will be showering deals on a plethora of their top-selling games this Cyber Monday reducing prices substantially. WePC has put together a team of PC enthusiasts to scour Steam in order to find the best deals on offer. That means you can sit back, relax, and enjoy browsing the best game deals Steam has to offer.

With Black Friday now over, the team is focusing on finding the biggest and best deal on Cyber Monday deals.

As soon as the deals go live we are going to be updating this page so save you the hassle of scrolling through the Steam store. So watch this space and prepare to expand your library.

Update Nov 29th: Cyber Monday is now live and deals are hitting shelves thick and fast, below are some for your consideration with 10% – 80% off their RRP right now!

We’ve already got our hands on some very impressive deals for you to get your teeth into. Below are those deals, but fear not, there are a tonne more to come!

There is every chance the games above could feature for even less this year as they are older or have sequels being released.

Even though the official Cyber Monday doesn’t start until 2nd Dec, there are still a bunch of deals live now and bidding gamers can start to fill their baskets as of today! Below, are some of the deals that are already on offer, plus potential deals we feel might become available.

These are the most popular game titles available. Last year we saw blockbuster titles like GTA 5 come with some excellent discounts, so we expect to see similar deals on mainstream titles this time around as well.

If like me, you’re well into your FPS games, you’ll be happy to hear that a whole host of top first-person shooters should be on offer this time around. We saw Far Cry 5 with a 50% cut last year! We will have all the best FPS deals here when the time comes.

There will be a whole bunch of AA and indie style RPG games getting a discount on Black Friday. We saw Final Fantasy 15 offered at half price last year, so fingers crossed for more the same.

Battle royal games are all the craze now, and as you can probably imagine, every man and their dog will be scouring Steam to see if their favorite is on offer. Here’s what we have so far.

F1 2019 has finally been released and with it, comes a lot of speculation around whether it might be on offer or not. We can almost certainly see some large discounts on previous titles of the game meaning there’s a strong chance it will be on sale this time around. There are so many racing games out there it is pretty much guaranteed they will be featuring for Black Friday.

Last year games like Total War: Warhammer 2 had a huge 50% off so it wouldn’t be surprising to see similar discounts on RTS games this year too!

With the Virtual Reality boom not slowing down, we will probably be seeing VR games like No Mans Sky and Rick and Morty featured this year with massive discounts to boot.

Finding the best Steam store Cyber Monday deals is now easier than ever. Simply refresh the page and see what’s up for grabs! Also, make sure to bookmark this page and as soon as the deals go live expect an update. What discounted games are you on the lookout for? Let us know down below in the comments!