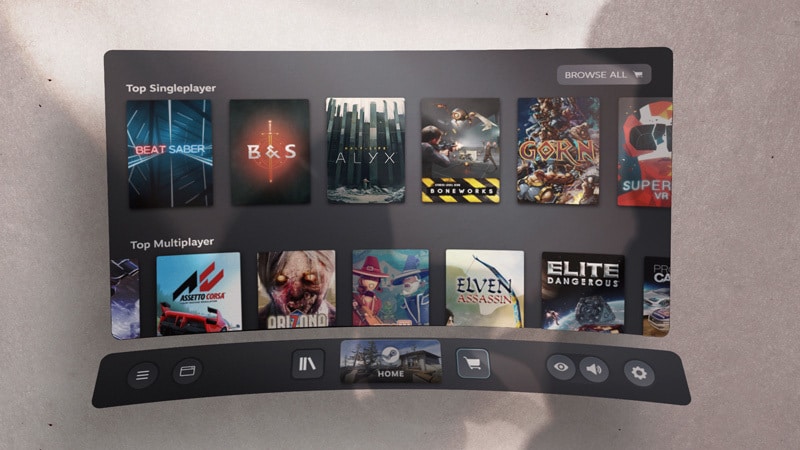 Over the past four years, developers have managed to release 4000 OpenVR games on Steam that work across various VR headsets.

Recently, Valve made an announcement that they would be changing the way they delivered VR. To support the next generation of VR games and applications, Valve is switching toward the OpenXR API. This is a move away from OpenVR which is what many titles have used up until now.

This means that many new features on SteamVR will “appear on the OpenXR side rather than as new OpenVR APIs”.

OpenXR is the open standard for VR and AR and was initially developed in March 2019. It was developed by a group of companies managed by Khronos. Within the group are some familiar faces including Facebook, Valve, Microsoft, AMD, Nvidia, HTC, Google, Epic, and Unity.

Why Was OpenXR Developed?

OpenVR is Valve’s API for SteamVR and only works on PC VR headsets. That means it doesn’t support Android headsets such as Quest and it can’t be used with Oculus Rift store apps due to Facebook’s policies.

So, apps with the Oculus API, can only run on Oculus hardware. For developers using a custom engine, this means they would have to create multiple APIs to be compatible with different headsets. As you can imagine, this can get pretty time-consuming for developers.

OpenXR was originally created with the aim to let engineers and developers target a single non-proprietary SDK. This should help to ease the headache of creating great VR experiences for multiple platforms with just a single API.

If you’re worried about OpenVR, Valve has assured people that OpenVR support isn’t going to disappear. OpenVR applications will still work on existing headsets and even future headsets.

“This is a key strength of the PC ecosystem and one that we intend to fully support with existing OpenVR applications.”

Valve has been working with engine developers to make sure that OpenXR will be supported within major game engines.

Unity has also got the latest SteamVR Unity Plugin which is in beta at the moment but supports Unity XR for rendering and SteamVR Input for controller processing.

At the moment, Facebook’s Oculus Quest has prototype support for OpenXR and the Rift is also expected to gain support for this soon too.

When it comes to the open-source world, Godot and Blender have already begun to start adopting OpenXR API too. It looks like they are also making good progress.

OpenXR support will now be available in SteamVR Beta and Valve is asking for developers to try it out and give feedback. Overall, it looks like some of the big names in the VR industry are going full steam ahead with OpenXR, especially now that Valve is putting it into practice.

What do you think of this move over to OpenXR? Has it been a long time coming? Let us know your thoughts in the comments below.