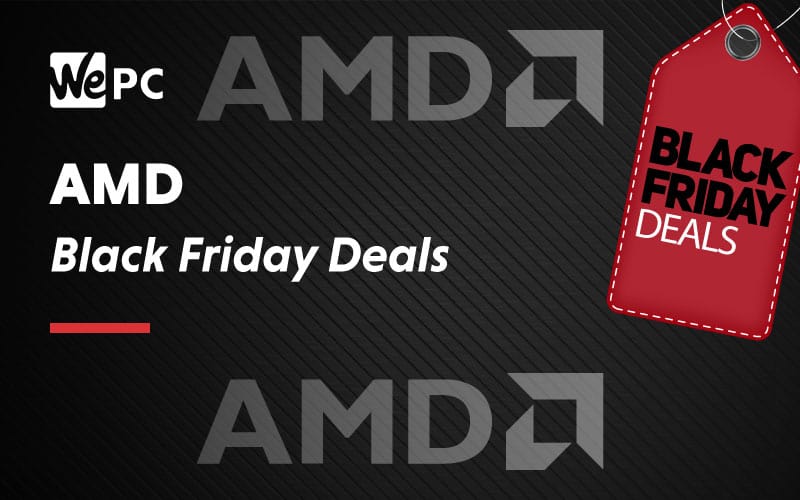 It has been a great year for AMD, with them destroying Intel in the consumer processor game. For those looking to build a new PC or upgrade their current system, Black Friday is an awesome time of year. Most of our custom PC builds on the website offer AMD as the CPU recommendation, which is due to the sheer value AMD offer. So whether you’re out for a new CPU or maybe a brand new graphics card, you’re going to need the best Black Friday AMD deals in one place.

Black Friday has been growing and growing over the years, to the point where it’s now a global sales event! The team at WePC loves a bargain, and we know you do too, so when the discounts start flying in on tech such as AMD CPUs or GPUs, we get overly excited. To simplify your shopping experience and get the deals into your basket faster, we are going to be updating this page regularly with the best Black Friday AMD deals.

We have already started to see deals going live across a few retailer’s sites. We are unsure if the deals are gradually going to get a bit better the closer we get to Black Friday, but products are already getting snapped up.

AMD Radeon GPUs normally receive a discount this time of year, and we expect much the same this time around. We are going to include the best AMD GPU deals for Black Friday 2019 right here!

With arguably some of the best CPUs currently in the market, we will hopefully see some impressive deals for the 1st, 2nd, and 3rd gen processors.

With AMD’s APUs featuring discounts last year, we know it is going to be the same this 2019 Black Friday.

With the release of the new Threadrippers being imminent, it is highly likely we will see older-gen TW processors getting some heavy discounts too.

Where To Find The Best Black Friday AMD Deals

It is hardly surprising to see all of the top retailers getting behind the Black Friday sales; it’s massive. Finding the best deals can be a daunting task, with there being so many different retailers, and the market is flooded with hundreds of great deals. To ease the process along and get those deals into your basket faster, we are going to be taking care of all your Black Friday needs and bringing all the best AMD deals right here!

For some of the best Black Friday 2019 deals, Amazon is always a great place to start. Amazon’s marketplace will be awash with tech deals when Black Friday arrives, with some deals already coming through!

Best Buy gets involved with the Black Friday sales event, too, and you can be sure of some more savings this 2019. You can expect great deals across your Ryzen and Radeon products.

Now you can take part in Black Friday from the safety of your PC chair, who doesn’t love it? Deals are there to be had when Black Friday 2019 comes around, and we have taken it up ourselves to bring you the very best of those AMD deals. Take the chaos out of your shopping and bookmark this page instead, so you don’t miss a beat. Are you looking for a new CPU or maybe a new graphics card? Well, AMD deals could be perfect for you and your next PC build. What AMD products are you hoping to get this Black Friday? Let us know over at the WePC Community.