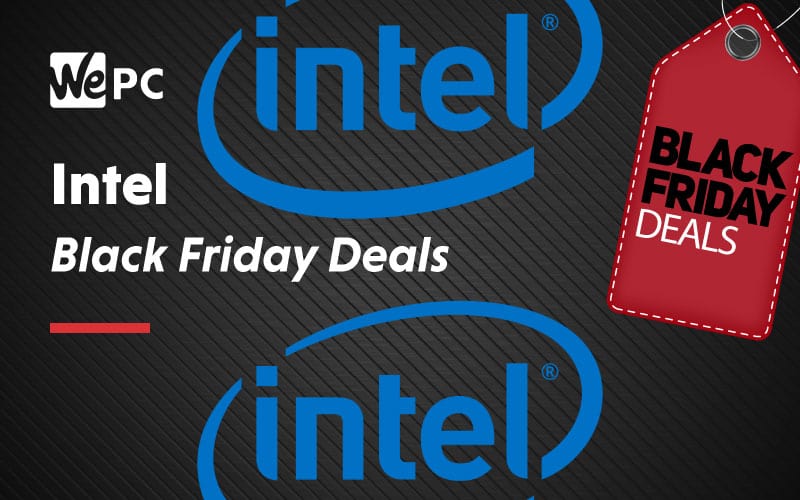 Are you stressing over the idea of missing out on some of the best Black Friday Intel deals the web has to offer? Are you worried about having to troll through a ton of different websites to make sure you get the absolute best deal available? Well, fear not! Our team of hardworking PC experts has scoured the web in order to find the best Intel deals this Black Friday, so you don't have to.

We understand how hectic Black Friday can be, and for that reason, we've decided to create a bunch of Black Friday pages to make your life a whole lot easier. Whether you're looking to snatch a big saving on one of the latest CPUs or snap up a bargain on a high-performance prebuilt gaming rig, be sure to come here to find the biggest and best savings this November.

Intel is known globally for being the second biggest semiconductor chip manufacturer in the game (beaten only by Samsung). They've made their name within the consumer-grade hardware sector by providing the masses with some of the best and most powerful CPUs out there.

Hundreds of people hit retailers around this time of year to try and grab one of Intel's high-performer processors at a fraction of the price. We understand it can be difficult to find the best deals, so for that reason, we've decided to showcase all the best Intel deals in one place.

So, stop worrying about having to find the best deals this November, we've just made Black Friday a whole lot easier.

Where To Find The Best Black Friday Intel Deals

Back in the day, Black Friday used to be a solitary day in the calendar, which would play host to deals on best selling products by select retailers. However, since then, Black Friday has evolved into something much more spectacular.

Black Friday is now an entire week where the biggest stores across the board try and grab your attention by putting huge discounts on some of their best selling products. And yes, that includes a whole plethora of Intel products

So, that being said, let's take a look at some of the best retailers for Black Friday:

We love going to Amazon for a great Black Friday deal, they always raise the bar, and this year, their Black Friday event begins at one minute past midnight on November 22nd!

Best Buy is one of the most popular destinations for Black Friday deal hunters. It offers a bunch of deals on its top products, and Intel is sure to feature in that lineup.

Another major player in the Black Friday craze is Newegg. This was also in our top three destinations for big discounts. We will be keeping this section up-to-date with all the latest deals as and when they appear.

We understand that not everyone reading this will be experts when it comes to Black Friday. For that reason, we've decided to revisit some of last year's biggest discounts to give new readers an idea of what deals might be on display this year.

Below are some of the standout deals:

As you can see above, last year played host to some absolutely fantastic deals on Intel products across the board. We expect to see similar, if not even better, deals this time around.

Because AMD and Intel are currently at war for CPU dominance, we wouldn't be surprised to see Intel reduce their products to an all-time low price to try and compete with AMD's immensely popular Ryzen CPU lineup.

So, there you have, our comprehensive breakdown of all the best Intel deals this Black Friday. We understand it can be a pretty stressful time of year, and for that reason, we've made this guide to help you along the way.

Remember to check back regularly for the best Black Friday Intel deals as we update them on an hour-by-hour basis.

Leave us a comment in the section below if you find a great deal we haven't spotted, or better yet, make a thread in the community for everyone to see.