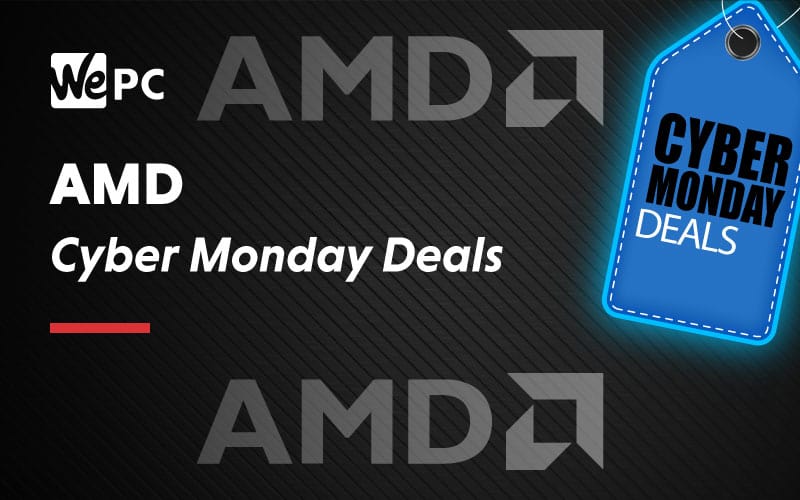 Tech giants AMD cleaned up this year with the introduction of their new line of Ryzen CPUs and more recently the Threadripper HEDTs. Black Friday may be over but great news! Cyber Monday is just beginning. For any content creators, gamers, or busy workers, Cyber Monday brings about some of the best AMD deals and WePC will help you find them. The vast majority of our custom PC build recommendations feature an AMD CPU at the heart and for good reason too. So whether you are after a new processor or graphics card, we are going to have all the best Cyber Monday AMD deals of 2019 right here!

With Black Friday behind us, don’t panic, there are still plenty of deals to come. That’s right, Cyber Monday is about to commence and it’s another chance to grab an AMD bargain. So you don’t miss out on AMD CPUs or GPUs, we are going to be constantly updating this page to feature the best AMD deals this Cyber Monday 2019.

The Deals are carrying over from Black Friday already. We are unsure if the prices are going to go even lower but there are plenty of deals to get you started.

AMD Radeon GPUs featured a discount over Black Friday, so be sure to pick up a new card this Cyber Monday. We will be on the lookout for the very best GPU deals as they come in.

With arguably some of the best CPUs currently in the market, you can be sure to see some impressive deals for the 1st, 2nd, and 3rd gen processors.

The AMD APUs took a slash on Black Friday and it looks as though those prices are going to remain low for Cyber Monday 2019 or even longer!

Now the new and improved Threadrippers have been released, it is highly likely we will continue to see older generation Threadrippers continue in the sales for this Cyber Monday 2019.

Where To Find The Best Cyber Monday AMD Deals

Online retailers brought Cyber Monday into the fray to get involved with the whole Black Friday event, but these days they are more or less one large sale. Almost all retailers will be slashing prices this Cyber Monday 2019 so finding the best AMD deal can become a bit stressful. To aid in your search for the best deal we will be continuously updating this page with the very best we find.

For the best Cyber Monday AMD deals 2019, Amazon is the place to start. The marketplace giants will be full to the brim with tech deals and we can see there are already loads of AMD bargains to be had!

Best Buy will also feature Cyber Monday discounts. So if your looking for AMD savings then head on over and grab one!

Another great place for computer components is, of course, Newegg. Cyber Monday will be popular on Newegg, with some similar deals to Amazon.

Let’s take a closer look at what Cyber Monday 2018 offered consumers. Some of the AMD CPUs received up to $65 off!

There we have the very best Cyber Monday AMD deals in 2019. Let’s face it, AMD components are already at a great price so any discount is just the icing on the cake. Eliminate the stress of your bargain hunting this Cyber Monday and bookmark this page instead! WePC have you covered and will be bringing the best AMD deals straight to this page as they go live. Are you looking for a new CPU or maybe a discounted GPU? Whatever you are after come share with the WePC Community.