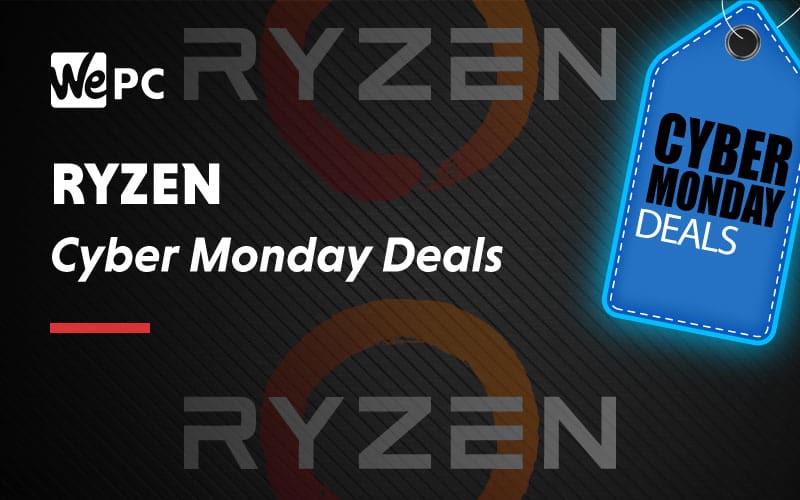 With Black Friday behind us, it is time to prepare for the next wave of deals. That's right, Cyber Monday is around the corner and we are going to have the very best Cyber Monday Ryzen deals of 2019 right here! Whether you are a content creator or gaming enthusiast, it is highly likely you will have heard of the all-new AMD Ryzen CPUs. AMD knocked Intel out of the way this year with the introduction of the incredibly powerful Ryzen 3000 processors. All of the Ryzen CPUs offer much more value than their Intel counterparts, and they are frequently recommended in our custom builds.

The all-new Ryzen Threadripper processors are now out so you can be sure to see some deals on the older models.

Cyber Monday used to be internet retailer's answer to the Black Friday sales event, but now we see the whole thing span over a week! Everyone loves a discount, especially on expensive products like CPUs and we've found the very best Cyber Monday Ryzen deals for you.

To ease the process and get you to those Ryzen deals in your basket quickly, we will be updating this page constantly, to feature all the deals in one place.

Where To Find The Best Cyber Monday Ryzen Deals

Cyber Monday gives you another chance to grab a great deal this 2019. A wide variety of retailers are going to be slashing prices to bring you some exciting deals. While the savings are great, finding the best deals can be a bit tedious, endless searching and what if you miss out on stock? Well, that's where WePC comes in, we are going to be taking care of all your Cyber Monday needs.

Amazon is always a great place to start when Cyber Monday 2019 starts as they constantly update deals. The marketplace giants will feature loads of offers and discounts are already well underway!

Another great place to visit for Cyber Monday deals is Best Buy. Just like Amazon, they’ve already got some interesting deals live for Ryzen!

Another great place for computer components is, of course, Newegg. Cyber Monday will be popular on Newegg this 2019.

Taking a look over the retailer sites, we see some fantastic deals already being launched. It looks as though Ryzen CPUs are going to be on offer for a while yet so get ready to save cash on your next PC build!

Regarded as the best CPUs on the market, we see 1st, 2nd, 3rd generation Ryzen CPUs on offer this Cyber Monday.

With AMD's APUs featuring discounts on Black Friday, we know it is going to be the same this 2019 Cyber Monday.

With the release of the new Threadrippers this week, we saw the older models get a discount.

Taking a look at the deals we saw on Cyber Monday 2018; you can be sure to see several discounts from AMD Ryzen once again. As you can see there were plenty of deals last year for Ryzen products.

Cyber Monday is another chance to reduce the cost of your new build or PC upgrade. Sure the sales event gets a bit chaotic outdoors but it doesnt have to be a stressful time of year! Keep checking this page for the latest Cyber Monday Ryzen Deals 2019 and bookmark this page so you don't miss out. What deal are you hoping for the most? Head over to the community and let us know!