The Last of Us 2 Release Date, Rumors, and News 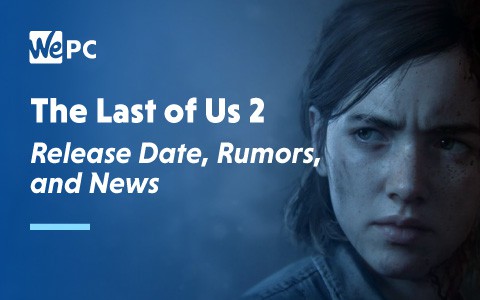 After such an incredibly popular first installment, it’s really no surprise that we’ll be getting a sequel in the form of The Last of Us Part II. The first game managed to achieve a perfect balance of intense gameplay and combat features with a storyline that kept you engaged. It was hailed as a gaming masterpiece by the fans and the critics.

News of The Last of Us 2 has been staggered over recent years, and we’ve got to see a lot of gameplay and storyline trailers. But, as far as release dates go, creators Naughty Dog has been rather tight-lipped.

The Last of Us 2 Release Date

After first being announced at Playstation Experience back in 2016, we’ve been waiting with bated breath for a solid release day that we can mark on our calendars. But, even though we’re now well into 2019, we’re still none-the-wiser.

This doesn’t mean we haven’t had updates though, and we’re pretty good at speculating release dates here. Since Death Stranding, another huge Playstation title, has taken the last 2019 release slot, it’s looking as though The Last of Us 2 release date is going to fall sometime in 2020.

As far as we know, the game is being released on PS4, but if a 2020 release date is what we’re looking at, then we might even get a cross-platform release with the PS5, which is also slated to come out that year.

UPDATE: At Sony’s State of Play event in September, we finally got what we have been waiting for all this time – a confirmed release date! The Last of Us Part II release date is officially February 21st, 2020.

UPDATE: Naughty Dog has announced on Twitter that the release date has now been pushed back to May 29th, 2020 due to feeling the game wouldn’t be up to scratch if they went ahead witth the February release.

The Last of Us 2 Trailers

One thing we have got plenty of since the original game announcement is trailers. Naughty Dog has been pretty generous and granted us with several gameplay previews and story teasers to keep us going through the long, long wait.

The first trailer came with the original game announcement at Playstation Experience in 2016. We get our first look at the new, darker world of The Last of Us Part II. While the trailer doesn’t show us any gameplay, we are introduced to the overall theme of this game – hatred, and revenge. And, while the creators have said there will be lighter moments in the game still, these are the main focus for the second installment.

The second trailer was another non-gameplay look at the darker world of this game. It highlights the conflict between humans and is completely brutal. It looks as though warring factions are going to be a massive part of the storyline.

Be warned; this trailer is graphic and gory.

Next up, we got a look at some of the gameplay with the trailer that was shown at E3 2018. We see a sweet scene at the start in what looks like a brief moment of respite for Ellie. Soon though, we’re sneaking through the woods, creeping up on enemies and killing them with skill. With Ellie being the main playable character this time around, the combat focuses less on throwing punches and more on stealth attacks and ranged fighting.

At Sony’s State of Play, we got another look at The Last Of Us 2. This time, we saw a bit more of the story, and the reasoning behind Ellie’s murderous calls in previous trailers. It looks like her love interest is killed in front of her, sparking her need for revenge. But, more than this, we not only get our release date, we also see Joel is back!

The Last of Us 2 Gameplay

The Last of Us Part II takes place five years after the original and focuses more on Ellie as the main character, who is now 19 years old. Not only has the cast of characters matured, so has the evil they have to face. The infected now seem smarter, more coordinated, and more deadly than ever before. It would appear that they are now able to communicate with each other and search for Ellie while she’s hiding creating some very tense moments for us as players.

The combat has also changed slightly, now that we have a different main character to work with. The first difference is that Ellie can jump. This should open up some interesting combat situations, as well as making the world of The Last of Us 2 more explorable than before. Also, Ellie is not as much as a forceful melee fighter as Joel was. Instead of throwing powerful punches, she has her stealthy knife and skill with archery.

One thing that hasn’t changed from the original is the importance of story within the game. What made this game stand out so much in the first place was how easily we were transported to Joel and Ellie’s world and the captivating performances by the lead actors Troy Baker and Ashley Johnson. The story seems to be much darker than the original and focuses more on the opposing relationships of the human characters in this world. Ellies swearing to take revenge seems to really set the tone of this piece.

It would seem that we still have a while to wait before we can finally continue the story of Ellie and Joel. If you haven’t played through The Last of Us yet, you’ve still got time – but get started, because you won’t want to miss out on this sequel.