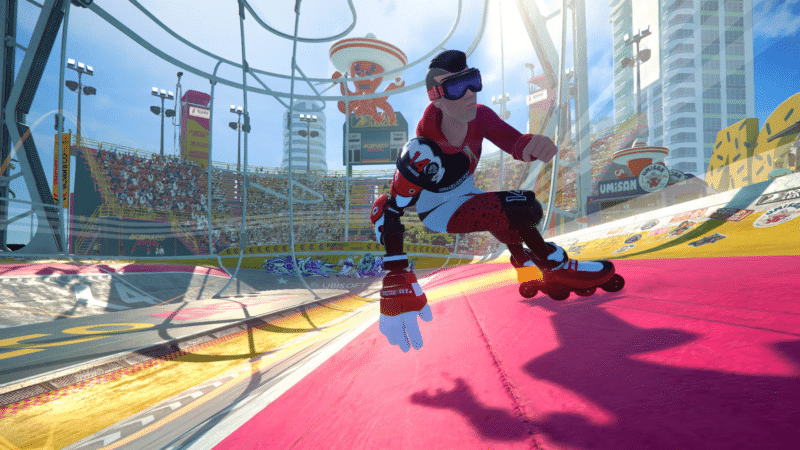 Ubisoft unveiled a brand new free-to-play multiplayer PvP sports title during its E3 briefing, dubbed Roller Champions. A pre-alpha demo running until June 14th is currently up for download on the Uplay store and Ubisoft is hankering for players to try it out and provide feedback.

Roller Champions is a hybrid sports title a la Rocket League that appears to marry the hyper-aggressive sport of roller derby with some classic b-ball in a stadium-sized slanted velodrome. In many ways, its an example of why video games are so great as no one in their right mind would play this in the real world.

With full contact no holds barred tackles and no rules about what direction you need to skate in, except when scoring or going for a two bonus-boosting lap that nets you double points, expect wheeled pandemonium.

Ubisoft says two teams consisting of three players face off in arenas scattered around the world. The aim of the game is to score points by completing a lap with the ball in your team’s possession before dropping it through a vertically angled goal attached to the side of the track.

Each match of Roller Champions is played as a round, with the first team to five points winning said round. Speeds can ostensibly reach up to 100 miles per hour, and players can perform a repertoire of acrobatic moves like wall-skating to gain a speed boost, mid-air tackles, and quick pivoting to surprise an opponent with a big hit and turnover.

It looks like Roller Champions will have a career-style mode where players can carry their fully customizable skater from rags to riches winning fans, landing lucrative sponsorship deals, upgrading their equipment, earning new obnoxious celebration animations, and access to bigger and better stadiums. A leaderboard will also showcase the best players worldwide.

Roller Champions is slated exclusively for PC, but no word on an exact release date right now other than early 2020.