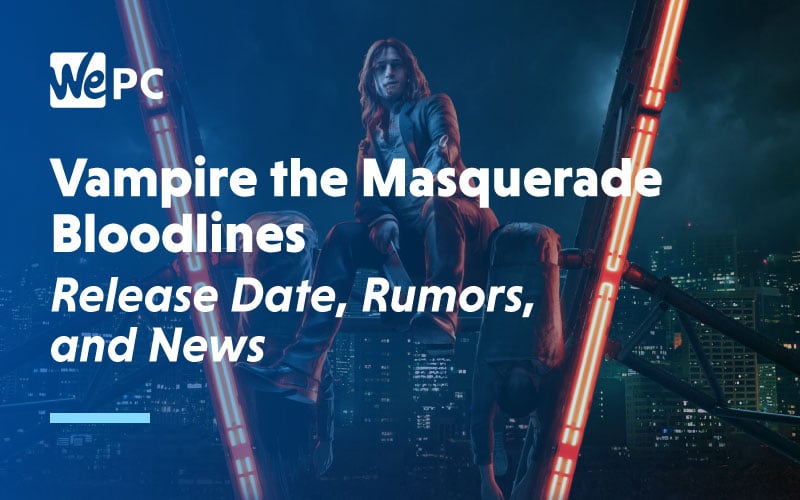 The original Vampire the Masquerade: Bloodlines game is a somewhat cult classic at this point. Releasing back in 2004, a golden year for games, the original title gained most of its fanbase as the years rolled on, rather than on its initial release.

The sequel to this title is something we’ve all been waiting for, hopefully, we won’t have too much longer to wait before we get our hands on it.

First teased earlier this year with a fake dating app, Paradox later confirmed this title in March. So far we haven’t had an official release date for Vampire the Masquerade: Bloodlines 2 but it had initially been scheduled for release in March 2020 before it was pushed back.

The actual release date will all depend on how well the development is going, for a game with a fanbase this large, it’s essential to get it right.

In a somewhat dark trailer, we get to see an overview of the city followed by an intense chase and a short taste of the combat. The trailer also glorifies some of the cultures and themes that we’ll get to see in this game, something fans of the series will really appreciate. If you’re interested in what may await you in Vampire the Masquerade: Bloodlines 2, have a quick look at the trailer below.

We can get a taste of the game’s pacing from the below gameplay teaser as well, keep in mind that this is just a demo version and a lot could change. We get to see a bit of the dialogue as well as a short combat scene where the main character takes down a group of thugs.

This title sees the setting shift from Los Angeles up the west coast to Seattle. Similar to the first game, there will be several factions all wrestling for power over the region. Moving on to your character, you’ll get your first glimpse of the world during a ‘mass embrace’, this is where a group of vampires is forcibly turning humans into vampires. This looks to be a chaotic start to your adventure but it also gives us a glimpse into what chaos and intrigue the story may hold.

With the single-player campaign set to be around 25-30 hours, there is going to be a lot on offer here.

We don’t yet know how in-depth the character creation will be, but one thing we do know is, you’ll be able to choose what your occupation was before you were turned – something that will affect story elements during your playthrough.

What Clans Will We See?

Anyone familiar with the Vampire the Masquerade: Bloodlines universe will be excited to know that all five of the initial clans have now been revealed. There will be more added via DLC no doubt, but for now, the lineup looks great.

You’ll first start off as a Thinblood, but without getting into too much detail, these aren’t really counted as a clan as such. The five clans on offer are as follows:

With a whole compendium of lore to choose from, Paradox will have no trouble finding ideas for future clans to add to the game, if they fit the narrative of course. Here’s hoping for a return of the Nosferatu!

With the large amount of information we already have about Vampire the Masquerade: Bloodlines 2, all we need now is a release date. The title will be available on PC, PlayStation 4 and Xbox One.

There are three different versions on offer for those who really like to invest in a franchise, you’ll receive the usual spattering of addons here if you choose to opt-in.

We’re still hoping for a 2020 Q1 release as the trailer states, but if it takes longer to get to us to ensure the quality the universe deserves, we’ll be happy to wait.