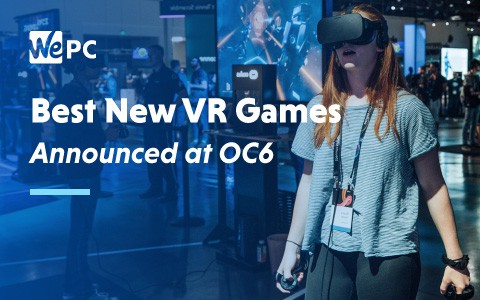 Game companies love to hold their own announcement events, and this week alone we’ve been treated to Sony’s State of Play, an Xbox update, and Occulus Connect. Occulus Connect (OC) brought us the latest from the VR gaming giant, although not much in the way of hardware. Here are our best new VR games announced at OC6.

If you saw Ready Player One, or read the books it was based on, then the new Facebook Horizon will look incredibly familiar. The new platform allows you to make a customer avatar and interact with others in a fully VR world. We don’t have a lot of details just yet, but it looks set to be an interesting new experience for VR owners.

The beta launches sometime in 2020.

We love a good Star Wars game here, and the latest VR offering looks set to be a great addition to the already impressive library. It follows on from the first game, but this time your mentor, Darth Vader, will teach you how to use the force as well as your lightsaber skills.

You can go to the dark side right now, as the game is already available.

Medal of Honor: Above and Beyond

This WWII epic game has been designed to be as realistic as possible in terms of the gameplay. This means you’ll probably spend as long reloading your gun as you will shooting people. But, that doesn’t make this game feel labored or clunky. Respawn has managed to make a really incredible shooter VR game with this. Highly recommend.

Beat Saber and Fall Out Boy

This might not be a game announcement, but it’s just as sweet. One of the most popular VR games around is Beat Saber, and they just announced a new music pack alongside Fall Out Boy. We’re a sucker for any new music to the game, especially a band which fuelled many of our late-night gaming sessions in our teens.

So, there we have it. Those are our favorite VR games from OC6. Which ones will you be playing first? Let us know in the comments below!

The Best VR Gaming Headsets in 2019