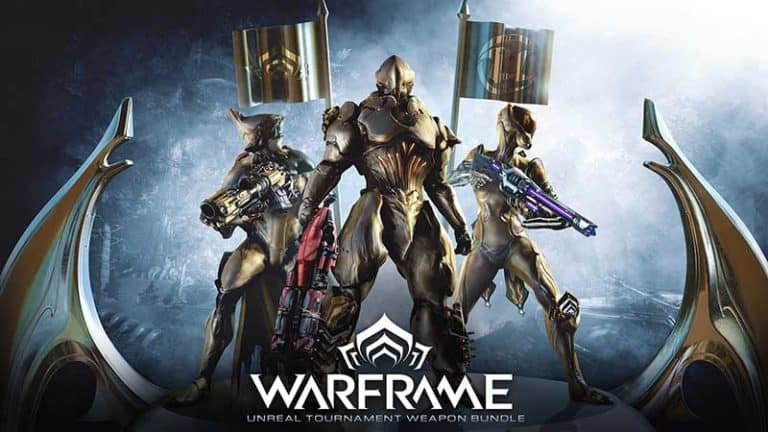 One of the most popular cosmetic bundles for Warframe in recent times was the Unreal Tournament bundle which was born from a partnership with Epic Games, and allowed you to bedeck your Warframe with a classic look of yesteryear and the monster classic that was Unreal Tournament.

As is the way with most skins these days rarity is awarded to items by limiting the availability and thus rarity can dwindle should a previously hard to get hold of pack suddenly arrives back on the scene. This is great for new players who may have missed out the first time, not so much if you have had your coveted skin that hardly any other player has and suddenly every Tom, Dick, and Harry is loping around in the same gear.

Well if you were one of the players who picked up the Unreal Tournament bundle you might be displeased that it is back available again on all platforms for a limited time only.

The Unreal Tournament Bundle features (according to the developers):

DRAKGOON WEAPON WITH SLOT
The Drakgoon Flak Cannon sends volleys of intensely hot shrapnel ricocheting around the room. Can be fired in wide or concentrated bursts.

STAHLTA WEAPON WITH SLOT
Nail them to the wall! The Stahlta automatic rifle propels hardened steel rods at high speed, while a charged fire mode fuses a number of volatile rods together for a large radioactive explosion.#

OGRIS ROCKET LAUNCHER SKIN
Dominate your look with this god-like skin for the Ogris.

DRAKGOON FLAK CANNON SKIN
Go wide for an unstoppable killing spree with this unreal-looking skin for the Drakgoon.

STAHLTA SHOCK RIFLE SKIN
Claim first blood with this killer Skin for the Stahlta – a common sight in tournaments of old.

So if you missed out last time, or simply weren’t around you might want to snap this up this time around before it is too late. It will set you back £13.99 in the UK and $15 elsewhere so if this seems reasonable to you, head over to the Epic Games Store and snap it up right away.