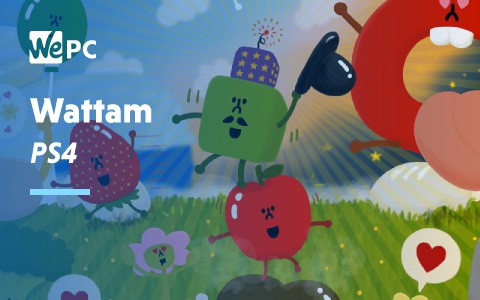 Remember that wacky 2004 PlayStation 2 title that became an instant classic, Katamari Damacy? It’s creator Keita Takahashi is hard at work on a brand new game unveiled during Sony’s State of Play broadcast last night. It’s called Wattam and it is as quirky as Katamari in more ways than one.

Part exploration of solitude, part narrative adventure, Wattam is about reconnecting a community of characters including a toilet bowl and a top hat-wearing green cube. There’s rainbow vomit, multi-colored feces, a boatload of laughter, and a whole cluster of absurd mini-games.

Story-wise, we have protagonist Mayor who’s on a mission to reunite all his buddies and rekindle a sense of wonder with the world around him. He’s pretty upset, and the darkness of his inner world means he can’t see the wood for the trees. Luckily a chance encounter kick starts an adventure he won’t soon forget.

If you’re confused, don’t worry, we are too, but that is the beauty of Takahashi’s games. Katamari Damacy remains challenging to explain and it’s even harder to pinpoint why rolling around the world, picking up ever-larger items to form a massive ball of stuff is so inherently fun.

Wattam can be played solo or in co-op from what we understand and is very much centered on having a good time with a levity few modern games can match.

Wattam heads to PlayStation 4 this December, although the unveiling stopped short of providing a definitive release date.