A GPU Guide to Virtual Reality 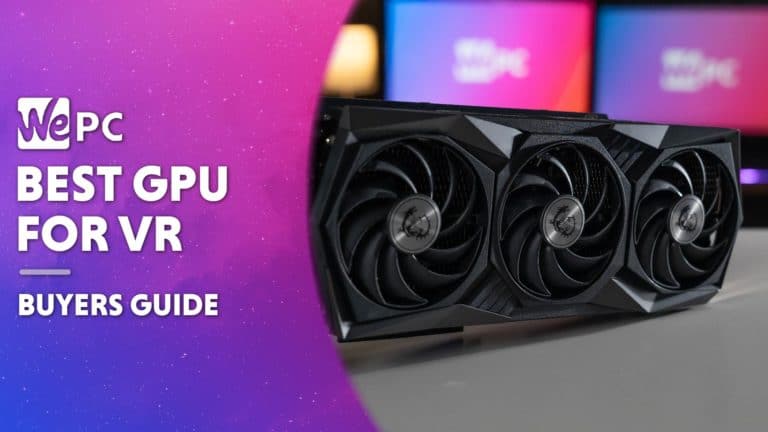 VR headsets need to be paired with fairly powerful computers if you want to access their full mind-bending potential, but no hardware component is as important to immersive VR as your graphics card.

Everyone prefers good graphics and speedy frame rates for run-of-the-mill computer gaming, but it’s not always a big deal if your GPU is underperforming. It’s irritating and perhaps you’ll lose a game or two, but that’s about it. In VR, an underperforming GPU can totally ruin the experience. Things like screen tearing, ghosting, or judder don’t destroy the illusion, they can cause headaches, dizziness, disorientation, and nausea. 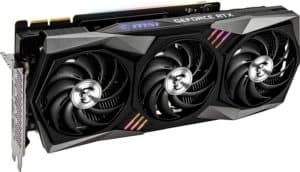 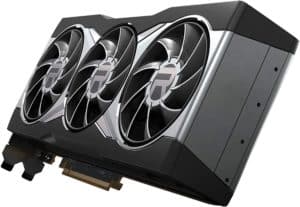 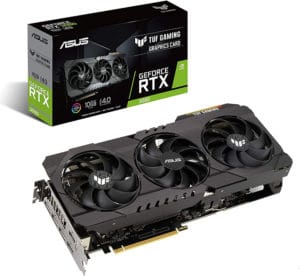 At WePC, we’ve been waiting for the VR revolution with as much anticipation as you, having been completely obsessed with the general concept since Nintendo’s Virtual Boy failed to find mainstream success. Now we’re finally witnessing some promising steps forward in the virtual field, there isn’t a day that goes by that we don’t wonder what hardware we can use to push the technology forward.

Deciding which is the best graphics card for VR is actually easier than you’d think because the best one for the job is always going to be the most advanced card available. We acknowledge this, but we’re also dedicated to providing you with a bit of variety, so we’ve put some of our other GPU favorites to the test as well.

Before we dive into some in-depth reviews, let’s run over some of the key factors that make a GPU a quality choice for some awesome VR experiences.

Most modern VR headsets, whether they’re made by Oculus, HTV, Sony, or Google, run in a 2160 x 1200 pixel resolution with a 90Hz refresh rate OLED display. That means for VR games to be played the way they’re intended, your graphics card needs to be pushing at least 90fps. In fact, it’s best if it averages out much higher than that to prevent lows ever falling beneath the 90fps threshold.

Ray tracing is a real-time rendering process that creates hauntingly real lighting effects in games, so if you want your virtual reality to be as real as technologically possible, a GPU with hardware ray tracing capabilities is the only way to go.

It’s important to note, however, that enabling ray tracing can have an adverse effect on frames per second, so you’ll need a highly capable GPU to pull it off smoothly. It certainly won’t be worth using software ray tracing with older GPUs in VR, as the drop in quality would be too drastic.

GPU architecture is made up of a vast number of cores. Generally speaking the more cores the better the GPU performance, but that’s not always the case. With each new generation of architecture, individual core performance is enhanced, so fewer are required to achieve the same goal. That said, newer architecture doesn’t always equate to better performance.

From family to family, there’s always a little bit of overlap in the GPU market, meaning that the best of a previous generation are better for gaming than the entry-level and sometimes mid-range GPUs of the next. For VR, newer architectures tend to be best, but never discount those champions of the previous generation.

Standard gaming in VR doesn’t necessarily need a massive VRAM capacity because VR displays have reasonably low resolutions compared to desktop monitors, but having at least 4GB will ensure textural components are optimized.

On the other hand, if you’re going to attempt to render an image sharper than that of the VR set’s native resolution, also known as supersampling, You’ll need a much larger and faster VRAM.

The Best Graphics Card for VR: 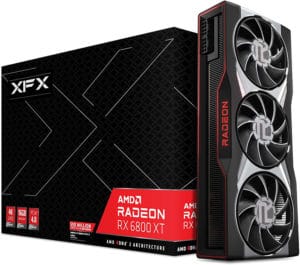 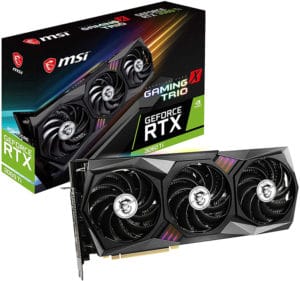 The RTX 3090 is the best of the best in terms of graphics performance, and the MSI Trio X is one of the most impressive iterations currently available. With three FROZR 2 fans whirring away, despite the high 370-watt PSU draw, this card runs nice and cool.

Not only is this ready to handle VR resolutions, with the 24GB GDDR6 VRAM memory configuration, but you can also even run your favorite games in 8K! This means that your VR frame rates will never drop below that 90ps minimum, even at this GPU’s lowest rate.

In fact, this will probably average out in the 250fps zone in 1080p on ultra settings, often breaking the 300fps mark and even average beyond 100fps in 4K resolutions. So, if you want to try your hand at supersampling, this GPU is the full package.

The beauty of this card doesn’t just rest in the impressive specs, it’s the special abilities threaded into the architecture such as variable-rate shading that focuses detail where you need it most, hardware ray tracing, and accelerated RT VR audio that really makes it the best of the best for virtual reality.

The Radeon RX 6900 XT is the number one listed premium VR-ready AMD graphics card, brimming with specs that totally exceed recommended Oculus and HTC requirements. If you’re really passionate about VR, this card is exceptional.

Much like Nvidia is experimenting with hyper-realism with various technologies, AMD too is making some big strides. First of all, in their RDNA 2 6000-Series architecture, they’ve finally cracked hardware ray tracing and even put their own spin on it with AMD Fidelity FX Luminance Preserving Mapping that boosts color quality and overall definition.

Obviously, with a 16GB GDDR6 memory type it won’t be quite as fast as the 3090 in advanced resolutions or for creative workflows. However, due to some incredibly snappy clock speeds, it will sometimes fractionally outperform the RTX card in lower resolutions, making it perfect for VR.

Another special feature that lends itself to breathtaking VR experiences is the Radeon Anti-Lag system that limits a CPUs processing if it gets too far ahead of the GPU, so lag is a thing of the past!

If you like the sound of the 3090 but you simply can’t bring yourself to empty your savings account, this Asus TUF RTX 3080 card is definitely more up your street. Considering the 3080 is a single increment down from the 3090, the price drop is nothing short of miraculous.

Obviously, the 3080 has fewer of all specs, but you still get 2nd generation hardware ray tracing, awesome variable-rate shading, RT VR acoustics, and AI capabilities. Honestly, it only ever really averages between 10-15fps less than the 3090, and it still averages beyond the 100fps threshold in 4K gaming, even with the vastly reduced 10GB GDDR6X memory buffer.

Asus has gone all out to make this the best 3080 card on the market. Crafted with military-grade, TUF components via an Auto-Extreme manufacturing process!

We’d be remiss if we didn’t mention the cooling system too. With each of the three fans featuring dual ball bearings, variable rotation, and automatic 55° shutdown, not to mention the Max Contact heatsink, this GPU is always primed and ready for optimal performance.

The RX 6800 XT is the next step down from our number two pick, the 6900 XT. Built from the ground up using state-of-the-art RDNA 2 microarchitecture, it has insane potential for VR applications, and even though it’s a cheaper card, it’s still brimming with epic AMD technology.

Thanks to 72 RT cores the 6800 XT offers you exquisite hardware ray tracing without having to worry about frame rates drooping below the 90 or even 100fps mark. In standard 1080p gaming scenarios, it averages just under 240fps and holds out just beyond 100fps in 4K, so prepare to be blown away when you don the headset.

You can also expect all the same RDNA 2 abilities that we spoke of in the 3900 XT review, including AMD Fidelity FX, Radeon Anti-Lag protocols, and AMD Freesync technology that completely eliminates the chance of screen tear – a definite boon for VR gaming.

It’s not just the AMD tech that’s special in this case, however, the work XFX has done is spectacular. From the high-quality shroud design, down to the super-quiet custom-build tri-fan axial structure.

The MSI RTX 3060 Ti is designed to excel in 1080p and 1440p resolutions at high settings, and at a push, it can be considered an entry-level 4K GPU as long as the settings are sufficiently dropped out.

Compared to the other cards on our list, it’s not exactly an fps powerhouse, but compared to, say, the RTX 20-Series, or the Radeon 5000-Series, it’s still a dominant GPU more than capable of silky smooth VR rendering. It may drop just below the desired 90fps zone during challenging VR titles such as No Man’s Sky, but for the most part, it performs very well.

Of course, it does only have that 8GB of GDDR6 memory, but the minimum memory requirement for modern VR, as set out by Oculus, is only 4GB, so while a larger memory would be better and give your GPU a bit more versatility, 8GB is fine for VR.

As fantastic as the MSI tri-fan FROZR thermals are, producing the best benchmark cooling performance of pretty much any other card design in the 3060 Ti’s class, it does hitch up the price quite a bit, and you could put that extra cash towards a 3070. That said, VR is going to pose more of a challenge to this card than its superiors, so the cooling system does pay off.

Gaming has always been heading in some form towards full-blown virtual reality. Even if we’re not donning the headset, we’re constantly on the hunt for greater realism from our graphics, thinner bezels that literally close the gap between our world and the worlds set out by our games, and spatial sound systems that take our senses on a wild ride. Short of some device that lets us smell our game’s environment (that’s our idea, you can’t steal it), VR has always been the logical conclusion.

You may not have the funds or the dedication to fork out for the absolute top of the line GPU and we don’t blame you because it holds a pretty hefty price tag, but now that VR has captured the imagination of the gaming community at large, tech is going to move pretty fast. The best way to prepare for this is to set yourself up with a quality, future-proof GPU, and any of the GPUs on this list are objectively amazing choices. 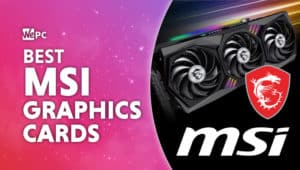 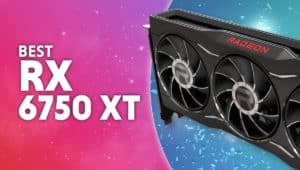 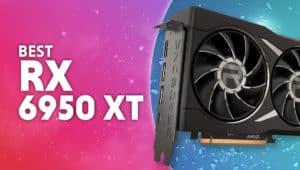 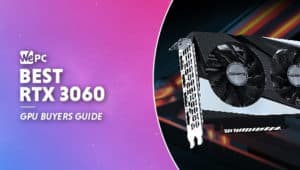