Home Blog Reviews CPUs i7 Vs. i9: CPU Comparison 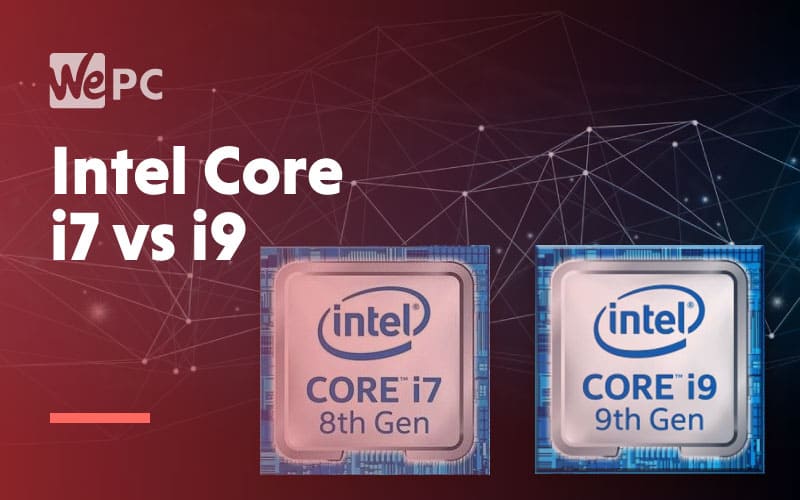 When it comes to choosing a new CPU for your build, it is important to know the difference. Processors come with varying names, and it can be difficult for first-time buyers to understand what they actually need. Generally speaking, the higher the number, the more powerful the CPU is going to be, but this doesn’t mean it’s going to be the best for the job. When Intel’s top processors are squaring off, what do you go for? i7 vs. i9? Well, this obviously depends on what your new PC build is actually for, so we have decided to make a CPU comparison!

Don’t worry, getting to grips with the essentials will assist you in your next purchase, so you don’t end up out of pocket. In this article, we are going to go over the key differences between these two high-end processor families.

The Intel Core i3, i5, and i7 processor families have been around for over a decade, with the i9 processors being released as recent as 2017. Since their release, these CPUs dominated the desktop PC and laptop market and have seen serious advancements in microarchitectures over that time. 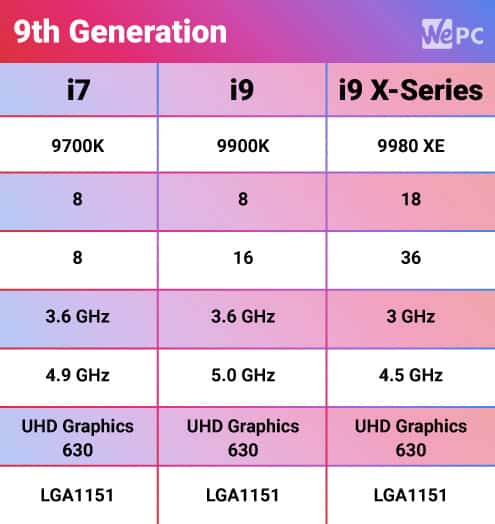 So Intel’s 9th generation of processors saw the end of Hyper-Threading with the i7 and introduced the Intel Core i9 family into the mix. As you can see from this comparison, the highly regarded i7 appears to have been relegated for mostly gaming and light application work, with the i9 family taking over the enthusiast bracket.

The top of the line i7 and i9 Intel processors feature a high core count, but does this really matter? Intel’s 9th-Gen i7 and i9 models all come with eight physical cores, much like the older 8th-gen i7 CPUs. Generally speaking, the Core i7 processors feature six to eight cores, whereas the i9 CPUs all ship with a minimum of eight.

The main difference between these processors is Hyper-Threading, but we will touch upon that shortly. The core count begins to look a lot different when you take the HEDT (high-end desktop) X-series models into account for both processor families. These enthusiast-level workstation processors will come with up to 18 cores. However, if you are looking into a gaming PC, this would be overkill, nevermind costly.

As you go up through the processor families, we see a trend with the increase in cache size. The cache is basically the CPU’s onboard memory and is responsible for accessing data faster. A larger cache size on a multi-threaded CPU helps deal with multiple tasks more efficiently. The i7 processors feature an L3 cache size of 12MB, whereas the i9’s come commonly come equipped with 16MB. The X-series processors can be even larger, with the i9-9980XE featuring an L3 smart cache size of 24.75MB.

When going over the key differences between the i5 and i7 processor families, we touched upon the fact that Intel had slightly tarnished the branding of the highly regarded i7 CPUs. This was because, with the release of the 9th generation, they removed Hyper-Threading. Now only mainstream 9th-gen i9 models will ship with Hyper-Threading (8c/16t), gearing this line of CPUs towards multi-tasking, but having said that, there is still plenty of gaming power to be had.

A higher clock speed means your CPU can process more instructions per second. Higher clock speed will usually equate to better performance, but this largely depends on what tasks the CPU is undertaking.

9th-gen Intel Core i7s and i9s mostly ship with a base clock speed of around 3.6GHz, with only max boost speeds being slightly different (4.9/5.0GHz, respectively). These figures are for the higher end models from both processor families and shouldn’t really factor into your decision making too much. You will find that the X-series CPUs with the higher core/thread counts will come with a much slower base clock and boost speed. This comparison isn’t really fair as the HEDT processors are designed to run a little slower, but they can run many more applications without breaking a sweat.

So Which CPU Is Best For You?

So i7 vs. i9, which do you go for? While there is an argument that both can be part of the enthusiast’s repertoire, the i9 definitely takes the multi-tasking biscuit. Obviously, which processor family you choose to go for largely depends on what you are planning to use your PC for. That is a no brainer, but the Core i7 is certainly a processor geared towards high-end gaming and if you went for an older 8th gen model, you could take advantage of some Hyper-Threading too. The standard LGA1151 socket i9’s offer much more than just fast clock speeds, with them being a decent option for streamers and content creators.

Although I feel the i9 series gets lost amongst AMD’s latest Ryzen Desktop and Threadripper CPUs for multi-tasking, it still offers a reasonable clock speed to give Intel fans something to think about. The bottom line here is that while both CPUs are powerful, you are going to want an i9 for hardcore workstation tasks and leave it to the i7’s for fast computing and gaming!