Home Blog Reviews CPUs i5 vs i7: Which Processor Should You Go For? 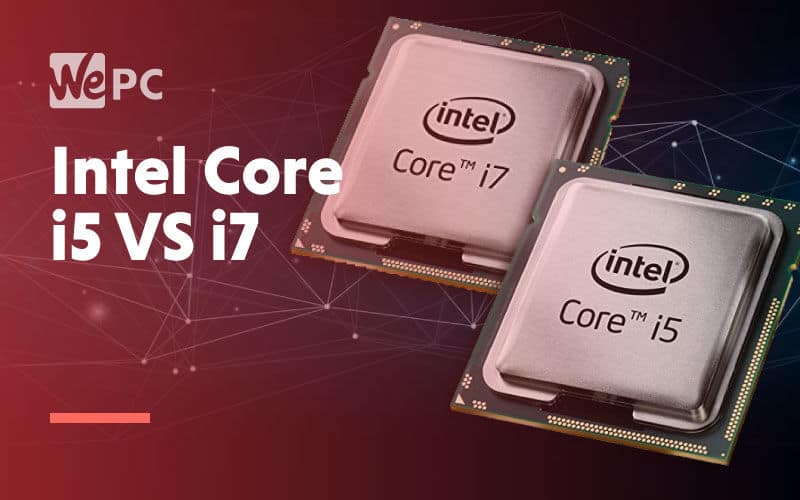 Whether you’re building yourself a new gaming PC, buying a new laptop, or prebuilt computer, the processor you go for is usually one of the biggest points for consideration. If you are looking at using an Intel processor, then we know it can be easy to get confused between the Intel Core i5 and i7, as they are incredibly similar, with small rather subtle differences. So i5 vs i7, which is best for you? Well, it obviously comes down to budget and, of course, what you plan on using your computer for.

Knowing the essentials should clear up Intel’s confusing naming conventions, and hopefully assist you in making the right choice when you buy a new CPU. Let’s get stuck into the key differences between these two highly popular CPU families!

Intel Core i5 vs i7: What’s The Difference?

Until AMD’s recent triumphs in the market, the i5 and i7 processor lines were two of the most popular for gaming and general computer usage. These processors offer a wide range of abilities at various levels of affordability and are, generally speaking, household names in the processor world. 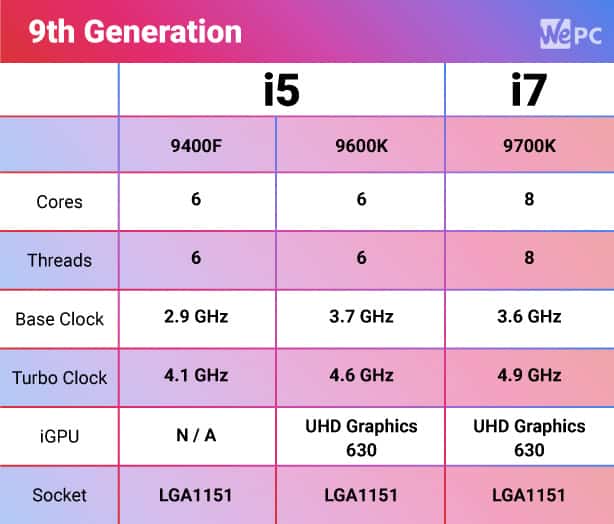 The 9th generation of Intel CPUs saw the successor to the 8700K stripped of Hyper-threading. While the 9700K still outperforms most CPUs in Intel’s range, the line lost one of its best features (hyper-threading), and the only reason we can think of to justify this was to help the sales of their flagship i9-9900K. 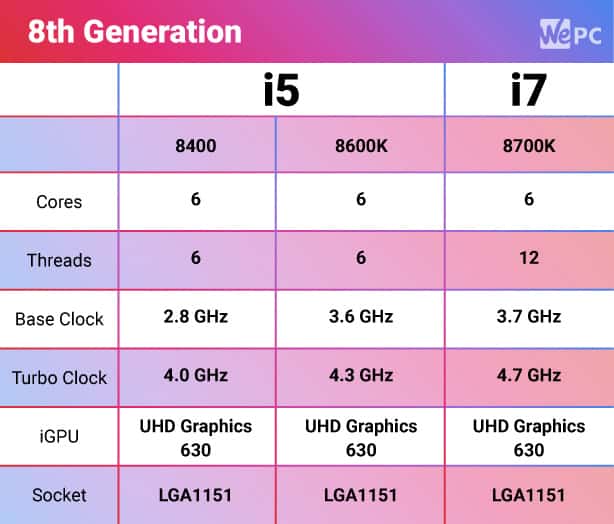 With i7’s geared towards PC enthusiasts and high-end builds, it isn’t surprising at all to see higher base clock speeds and impressive boost options too.

A CPU core is a CPU’s processor, relating back to the days when every CPU was made up of a single core. Regular desktop CPUs now have anything between two to sixteen cores, and each individual core is able to tackle a different task.

A high percentage of Intel’s Core i5 and i7 processors from the 8th and 9th generations feature at least four cores. For general computer usage, four cores are probably considered to be the sweet spot – but even six-core CPUs are easily affordable now. The latest i5 models tend to feature six cores – apart from the multi-threaded i5’s used in laptops, which will usually come with four. many of the later i5 and i7 models will feature six cores, with the higher end models shipping with eight.

Alongside faster clock speeds and extra cores, i7 CPUs generally have large caches too. The cache is the CPUs onboard memory and helps the processor deal with tasks and access data faster. The larger the cache size, the better equipped you are to deal with multitasking, but it isn’t a stand out specification that most concern themselves with. The difference between the previous two generations of processors is just on size, with Core i5’s featuring 9MB of L3 cache and i7’s with 12MB.

The main difference between the i5  and the i7 is the i7’s Hyper-Threading capability. Hyper-threading is a technology by Intel that increases the processor’s performance on multithreaded tasks. Hyper-threading makes it seem like an individual core has been doubled, letting each core address two threads at the same time. This technology comes in very handy when dealing with work that depends heavily on multitasking, like rendering.

Until the latest 9th generation of CPUs, the i7 models came with Hyper-threading, whereas only the lower core count i5 chips are available with this technology. Generally speaking, a CPU with Hyper-threading will be much more capable than one without. If your general computer usage is all about multitasking then hyper-threading is probably a must for you. It isn’t always easy to see what the number of cores and threads are on a CPU but you can head over to our CPU hierarchy to find more information and compare specifications.

Turbo Boost is essentially an overclocking feature from Intel that will automatically run the processor core faster than its base clock speed. Regardless of what Intel CPU you have, they will each come with a base and boost clock speed. It is important to note your boost clock speed and ensure you have adequate cooling for the job if you plan on overclocking. How high your clock speed can go is all down to the design of the chip and how long it can sustain the boosted speeds.

There is a reason we see Intel CPUs at the helm of the majority of laptops, its for the integrated graphics. As your standard laptop is not designed for gaming, there is little need or room for a dedicated graphics card. These machines rely on what is known as integrated graphics or Intels HD/ UHD Graphics.

As the graphics are integrated with the CPU, this generally saves power and is a smart graphical solution for laptops. Integrated graphics naming conventions work generally in the same numerical way the Intel processors work, the higher the number, the better. Despite this, it is worth noting that if you truly want to enjoy gaming at 1080p and above, then you need to go for a dedicated graphics card.

So Which CPU is best for you?

This should be taken with a pinch of salt, but generally speaking, the Core i5 CPU is geared towards the budget-minded masses who care about performance. The flip side is that the i7 would generally be for enthusiasts or gamers with expensive rigs.

So why consider an i5? well, they are generally cheaper and one of the most mainstream processors on the market. For generic computer users who browse the web or use the odd light application, the i5 is pretty much perfect for your needs.

If you are someone who works with demanding applications such as the Adobe suite or is looking to do some high-end gaming, then the Core i7 could be the better way to go. Regardless of what processor line you choose, you can expect an array of options to cover various needs and budgets but the bottom line is: for gaming, go for an i5 as games don’t utilize the Hyper-threading technology and for multitasking, aim for an i7.