Pengo! Well known for their affordable, easy-to-use capture solutions and chargers, Pengo wants to lead the charge into the 4k capture device industry. The Pengo VideoSync Grabber Box is designed to allow HDMI passthrough of up to two devices at once and capture resolutions of up to 4k at 30Hz to a PC or streaming device, allowing you to capture gameplay from any HDMI source. It’s aimed squarely at the gamer/streamer market and we got our hands on it to run it through its paces. We weren’t left disappointed.

The box contains the actual Pengo VideoSync device itself (obviously) and two cables – one USB-A to USB-C and one USB-C to USB-C. You also get a power cable and regional plug adapter heads (USA, EU, UK).

The VideoSync box itself is made of aluminum and is pretty weighty – it feels like the box means business, and the design means it will fit in perfectly on any gaming set-up. There’s also a blue display LED situated on the front of the device to indicate the device’s state/current action.

On the left of the Pengo VideoSync is the power port, HDMI A, and HDMI B inputs, with the USB-C output, HDMI Output, and a 3.5mm audio jack on the right.

But what does it do? It’s designed to aid you in your quest to deliver unrivaled entertainment to the masses, all in 4k. It’s a grabber box, basically a streaming aid, but what do we mean by ‘grabber box’? Well, the VideoSync takes an HDMI signal and ‘captures’ it to then pass it through to the ‘output’ device to be displayed. 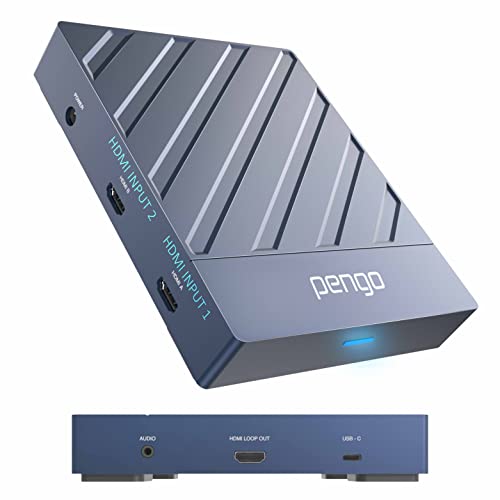 Setting up the Pengo VideoSync couldn’t be any easier. All you need to do is attach the included power supply to your Pengo box, then plug in one of your input sources (sometimes called a target when referring to capture devices) to one of the inputs on the left. This could be a console or a PC – something you’re going to be playing games on.

You can also add a DSLR camera or HDMI-enabled video device to the other available HDMI input port on the left, for split-screen or picture in picture (PIP) options. The HDMI output port is located on the right and needs to be connected to a monitor or other display.

How you capture footage is via the USB-C connection on the Pengo. Just locate the USB-C connector on the right of the device and plug that into a USB-C or USB-A port on the stream PC (sometimes called the source) via the included cables.

It also supports HDMI loop-out VRR mode. There are three types of this technology – G-sync from Nvidia, Freesync from AMD and HDMI VRR. This means the Grabber Box supports the ability to vary the output refresh rate.

There are a very wide variety of capture resolutions supported by the Pengo VideoSync that change whether you’re using the USB 3.0 or USB 2.0 interface, or using different video formats (NV12 or YUY2).

The Pengo VideoSync box ships with VideoSync software that allows you to configure VRR, AFV, volume, updates and to reset the box when necessary. This is a really handy tool, not only for box maintenance and ensuring everything is up to date, but also for troubleshooting.

It means pretty much any modern-day PC will be able to run the Grabber Box and software comfortably, which is impressive.

So who is the Pengo actually for? Well, you and me. The Pengo 4k VideoSync Grabber Box is for the average gamer, the console gamer, the budget gamer… anyone who wants to capture and stream gameplay. It’s easy to set-up and its intuitive integration into third-party software like OBS makes operating the Pengo a breeze. It essentially plugs and plays – there are no drivers and no hassle, and we like that a lot.

The Pengo is currently available on Amazon for $350 and the capture quality and dual HDMI inputs make this a really good buy. The picture-in-picture onboard technology is phenomenal and takes a huge amount of hassle out of configuring video inside of your streaming software. The sleek, stylish and robust design ensures the VideoSync Grabber Box won’t look out of place in battle stations of all schemes and styles.

5 Reasons You Should Be Playing World of Warships

Hands-on: EKSA Air Joy Plus. EKSA’s new offering has the makings of a great gaming headset