The Razer Huntsman combines a simple sleek design with reliable high-performance switches to bring a superb mechanical keyboard to the table.

I have been using the Razer Huntsman gaming keyboard for around two weeks now and after becoming acclimatized to the incredibly clicky Razer Purple switches, this slowly became more enjoyable to use over that time, albeit one of the loudest I have ever tested. The main talking point of the Huntsman is those Opto-Mechanical switches that use infrared light to send a signal to the keyboard when the beam of light is broken, but more on those a bit later on.

We have the base model here, with two other variants on offer from Razer. The Huntsman Elite is their premium offering of the three that comes with dedicated media controls, a wrist rest, and underglow lighting. The most recent version of the Huntsman keyboard is the “TE” version, which is Tenkeyless and features a detachable USB Type-C power cable.

Let’s dive deeper into this mechanical keyboard and see how it stacks up against the competition and if it creeps into the best gaming keyboard category. 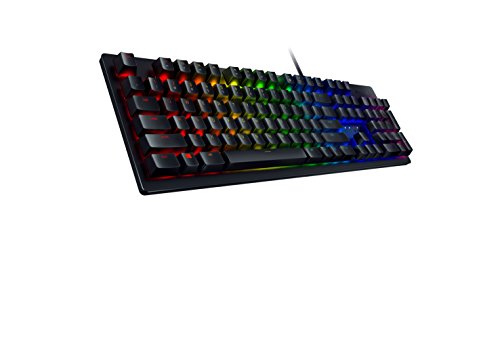 The box was as expected, black with green accents and a large image of the product dashed across the front. What I loved about the Razer keyboard packaging was the arrow key cutout, allowing you to try the switches if you were picking this up in-store.

The first thing I noticed when removing this from the box was the understated sleek design. What was instantly impressive was the clean, easy to read font, it’s one of the best I’ve seen on a keyboard.

Unlike a few Razer products, this all-black keyboard barely features any noticeable branding, in fact, there is just the one bit of Razer branding at the top right of the board. The glossy keycaps and matte aluminum plate look great straight out of the box but even more so when the RGB is in full flow.

This understated design reminded me of the simplistic BenQ Zowie Celeratis II, which is still one of my personal favorites. The looks of the Huntsman aren’t a million miles away from the pricey Black Widow, however, we see the keycaps are sat over the top of the plate, making this much easier to clean.

The shape is pretty standard, only we see more rounded edges and with everything floating above the plate, we have a very attractive looking keyboard from Razer here. While you can use the function key to activate the media keys, it would have been nice to see dedicated media keys included but this is how they get you buying the more premium versions I guess.

The board is sturdy and has enough weight to it, although it’s supremely lighter than a Ducky or the previously mentioned Celeritas II. Its lack of weight is down to being mostly plastic and while it’s robust it does have a lot of rattle. The rattle is down to the vast amounts of parts on the board here, with stabilizers on each switch there is just a lot of chatter. The chatter isn’t something you notice while typing or gaming too much but it is there.

The underside of the keyboard falls in line with the rest of the simplistic board, with six rubber feet for stabilization. Furthermore, there is some height adjustment (unlike the Celeritas II) with two flip-down stands (one small and one tall).

Lastly, the cable which is a 2m long braided one is hard-wired! While this isn’t the biggest of deals I would much prefer to see a detachable cable, saving me the need to wrap this around when transporting.

Overall you are getting an incredibly visually appealing, high-performing keyboard but it is rather pricey for the included features.

The Razer Huntsman Gaming keyboard comes with some classy features and it’s the main driving force behind the premium price tag we see in the range. While this may not have as much going for it as the elite version, it still has plenty under its hood.

The switches are some of the best I have used, with the tactile moment seemingly perfectly aligned with the actuation. This accurate performance is owed to the latest switch technology – the Opto-Mechanical switch. Rather than waiting for contact, this keyboard uses an optical laser. When you press any of the buttons, the stem travels down breaking the beam of light. Once broken, the switch actuates, registers, and resets all at the same time. Now that’s responsive!

The switches featured here are Razers Purple, which are very similar to the Greens we have seen on previous boards. These are incredibly “clicky” with two audible tactile clicks. These responsive switches match Greens in terms of actuation too, with 45g force and a 1.5mm distance required to actuate and a travel distance of 3.5mm. So overall, these switches give us something that is 30% faster than a traditional mechanical switch. Much like the Greens, these are basically the brand’s switch option that performs closest to Cherry MX Blue.

It is worth noting that these Purple switches are the loudest I have ever used on any keyboard and we will cover what that was like during use a little later on but basically, this isn’t a keyboard for the office!

Each switch has its own stabilizer, which does a superb job of keeping everything precise and means you can accurately actuate a button from any angle. The main issue, albeit a small one, is the increase in chatter from these stabilizers. Regardless, the performance was excellent throughout use.

At the top of each of the switches, we see MX style stems, meaning you can easily swap out the keycaps for another set. While we are on the topic of keycaps, these are ABS. That’s right, a keyboard as expensive as this with low-quality keycaps. This isn’t a big deal to me but these will wear over time and start to look rather disgusting, so you may want to grab some PBT caps to replace them.

The lighting is quite subtle from Razer with this base version, especially when compared to the Elite. The aluminum base reflects a lovely underglow to each key and the RGB really does make this board look fantastic. Each key is individually backlit with its own LED and the lighting is incredibly vibrant.

Before we talk about the effects, or the slightly irritating Synapse software, there is a neat little design choice that goes a long way here. Often if you are in a dark room you can’t see which of your keys is the media option for volume or play but Razer has a workaround. When you hold the Fn key to activate media controls, the board’s lights go out, leaving only the function keys lit up in white, nice.

This keyboard is compatible with Razer Synapse 3.0 and is mostly great for setting up your lighting effects. I have had some bug issues in the past but this time we were OK and everything behaved.

The keyboard has hybrid on-board memory and can save profile configurations to the cloud storage, with up to five profiles on the board itself. The Huntsman is part of the whole Chroma range from Razer so you can sync this up with your mousepad and mice or just have it going crazy on its own.

The Huntsman comes with built-in macro and game modes, with this being customizable in the software. With this board, you can customize and combine macros to give you the in-game control you need. Now, this isn’t a feature I personally use as I mostly play FPS but it is always great to see versatility.

Now, all boards similarly priced feature macro customization but with Razer Hypershift you can essentially get double the number of available keys. This means you can assign a button to more than one function and with a keypress,  you can utilize it. Again, all this is easy to navigate and saved through the Synapse software.

So I’ve mentioned how much I enjoyed the performance of these optical switches but how were they in-game?

The first thing I noticed moving from my Ducky One2 Mini (60%) was that I needed to adapt to the size, as I was constantly pressing the wrong key. This wasn’t the keyboard’s fault of course and once my brain caught up it was plain sailing from there on out. I mostly play FPS titles such as CS:GO, Warzone, and Squad, so I was unable to test out the 10-key rollovers performance in-game but the feature kicks in and does its job when needed.

I thought moving from the speedy Red Cherry MX switches to these tactile “blue-like” Razer Purples would negatively impact my gaming in CS:GO but it didn’t. In fact, quite the opposite, as I had a tactile response to what I was doing, giving me greater confidence when quick switching, moving, or ‘nading.

The only factor that was an issue while gaming was the streams of abuse I was receiving from my Discord server. Now, I don’t use push to talk (don’t shoot me) but I had to turn voice activation up to counter these switches as every keypress was being heard on the server. So streamers, this is probably a no go for you.

Typing was a pleasure, although I prefer the fluidity of Red style switches as I feel I can type much faster. Again, the noise was the biggest issue here, with me getting several death stares while using this, with it beating the Redragon K552’s deafening switches for noise.

Overall, accidental presses were kept to a minimum and the bounce time is pretty much non-existent thanks to the optical switches.

Assuming you are a lover of tactile, clicky switches, there is little to dislike about the Razer Huntsman gaming keyboard. It would have been nice to see a volume bar and some dedicated media keys but these aren’t the most important of features and you can always go for the next one up if you’re committed.

Ignoring the price, we have a sturdy board with highly-responsive switches that are not going to break any time soon. The ABS plastic keycaps are a bit of an oversight, shall we say, on Razer’s behalf but the design is marvelous and the keycap font is one of my favorites to date.

On a whole then, we have a visually appealing keyboard that is customizable, responsive, and reliable and while the “Elite” version comes with all the bells and whistles, this simplistic approach is more up my street.

The Razer Huntsman combines a simple sleek design with reliable high-performance switches to bring a superb mechanical keyboard to the table.