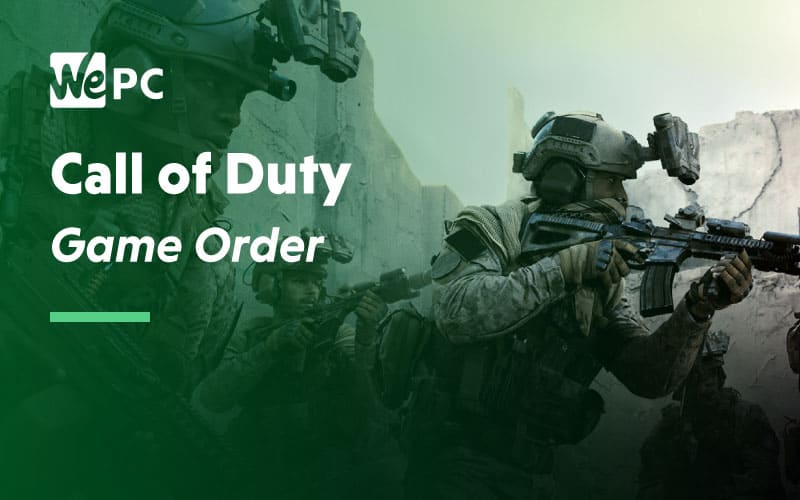 It is hard to think of a game franchise that has been as successful as Call Of Duty, go on try and name one. The AAA blockbuster series has brought some of the most iconic moments in gaming history with the occasional controversy along the way.

In 2003 Call Of Duty hit the shelves and redefined FPS shooters for the masses. Call Of Duty changed WW2 gaming and made it a smashing hit. After 15 years of or releasing new and exciting action stories, we take a look through the different main titles and present them in order for you. Sit back and reminisce with or complete Call Of Duty game order list.

Activision published the original Call Of Duty and saw a new age of the first-person shooter hitting the shelves. The game immersed you in infantry and combined arms combat of World War 2, in a similar fashion to the infamous Medal Of Honour.

Ths game brought a new approach to the table. No longer were you just a lone wolf sweating it out, now you had AI-controlled allies who would support you on missions. The single-player campaign was split between the Americans, British, and Russians with great realism and addictive mechanics.

The original game was developed for Windows, however, in 2009 the game was re-released for Playstation 3 and Xbox 360, giving fans a taste of the past.

Two years after the success of CoD brought the release of Call Of Duty 2. The game's development saw new creative parts that would later feature in every Call Of Duty game that would follow. This fast-paced title ditched the health bars and brought in regenerative health with an on-screen indication that resembled your character being hurt.

The single-player campaign was laid out in similar fashion to its older brother, only with improved graphics. With three campaigns being fought that featured the Americans, British, and Soviets, you would face a total of 27 single-player missions. The game was a huge success and went further in the multiplayer sphere, with the availability of modding tools on the PC platform. The PC gaming community managed to create the wonderful beginnings of a competitive mod, known as "Promod".

The third entry to the Call Of Duty series was one of the more disappointing titles to be published. Call Of Duty 3 was Treyarch’s first go at developing a CoD game with no changes to the gameplay features.

Treyarch developed some lovely looking maps with the game getting a graphical facelift. However, the one thing they brought into the franchise was multiple protagonists. The game lacked bite, and the multiplayer was no different, but the inclusion of vehicles was amusing and welcomed by many.

This title didn’t make it to PC, but if it did, I don't think the CoD2 players would have switched seeing how good that game was (and still is). The game may have sold more copies than the previous title, but that is no reflection of how well it played.

Call Of Duty brought some changes into the franchise, and it did it with utter class. Modern Warfare spelled the end (for now) of the old WW2 setting and, wow, was it spectacular.

The basic mechanics were not altered too much; in fact, they were improved, only this time with a multitude of new-age weaponry and toys. The single-player campaign is regarded as one of the best in the entire franchise and featured both an American and British protagonist. The game was revolutionary, and the wall penetration mechanics really were something to behold when this game was released.

The multiplayer in CoD4 was also one of the best to date with the introduction of prestige mechanics and a perks system, which players could customize. CoD4 saw the resurgence of the competitive scene on PC as mod tools were once again released. CoD4 offered players a fast-paced FPS alternative to games like Counter-Strike, and it caught on again in the form of "Promod".

Call Of Duty: World at War

World at War saw the return of developers Treyarch back in the mix. Cod5 went back to the World War 2 era only this time it was set around the Pacific and eastern front. The game stayed true to the classic CoD fee,l but it was brilliantly made and featured some interesting graphical upgrades (limb loss) for increased immersion.

Multiplayer was again similar to previous versions and extremely fun to play, apart from those bouncing Bettys! At this stage, CoD games were being rolled out annually, so they didn’t have a very long multiplayer life, but CoD 4 was still more popular in the competitive sphere.

In 2009 the Call of Duty franchise launched its follow up to the smash hit 'CoD4' with Modern Warfare 2. In a similar fashion to its predecessor, you played as British special forces and as an American infantryman. The mechanics were much the same, which was largely responsible for its success. However, the game was given a facelift.

The new game brought some new weapons and ideas like dual shotguns and bulletproof shields. The franchise began to move away from classic shooters with this game, introducing new perks. One of the best things about the game was the 'Spec Ops' mode. The title was huge with players all over the world despite its controversy from that one infamous mission. If for some reason you didn't have this game back, then it is worth having a little look at the airport mission that caused a bit of unrest.

A year on from what a lot of CoD fans would consider the franchises last truly good game followed the first Black Ops title. Call of Duty: Black Ops moved away from the war setting and brought gamers into the world of special operations that go on in the background.

This title didn't change much in the gameplay, of course, we saw new weapons and settings, but it was largely similar. The one change was that this game featured was the single protagonist in the single-player campaign.

Multiplayer saw a return to the zombie mod that we saw with World at War. For me, the online multiplayer lacked the action and skill level of previous titles and was generally bland.

Somehow MW3 is the best selling CoD game of all time, and I'm not really sure why, but we are not here to judge. The game was the first co-developed game in the franchise between Infinity Ward and Sledgehammer Games.

This title followed suit and was really just a reskinned version of previous titles with very little capturing our imaginations. The game brought a new game mode into our living rooms with "Survival". Survival was a co-op based game that pitted players against waves of enemy attacks and was generally quite fun.

2012 saw the sequel to the popular Black Ops being released. Black Ops 2 wasn't much different from the first title, but again, something new was introduced to players. In this sequel, we saw two campaigns set in the past(the 1980s) and future (the 2020s).

This title saw the return of the popular Zombies game mode and was generally just like the older game. Multiplayer was introduced to a new weapon upgrade mechanic where playing and leveling up your weapon would unlock new attachments.

Call of Duty: Ghosts is the franchises 4th most sold game and the 4th game developed by Infinity Ward. This title was technically Modern Warfare 4 and introduced a whole plethora of new characters into the mix.

In terms of gameplay one of the more interesting characters was the ability to team up and control your German Shepard, Riley. Multiplayer was, of course, similar again only with new weapons and surroundings, but this time there was an element of destructible environments thrown in.

In 2014 we saw the release of Advanced Warfare which featuring an increase in the more Sci-Fi-esque elements to the franchise. This title was the first solo effort from developers Sledgehammer Games, and it wasn't very popular.

The game introduced one of my pet peeves in the franchise, the exoskeleton suit. The game went too far from the game we all know and enjoyed, so it is of no surprise to see it struggled in sales. They tried to introduce a competitive mod built into the base game, but without the community modders getting hands on this, it was pretty terrible.

Black Ops 3 saw an end to older warfare and ramped up the futuristic elements we saw from the previous title. The game was set in the 2060s, and its best feature was the fact you could play 4-person co-op in the campaign.

Again we saw Exo-suits, wall running, and ridiculous perks being introduced, which ultimately killed the game quickly just like Advanced Warfare. The game also brought in some improvements to the Zombie game mode.

Infinite Warfare is one of the worst-selling CoD games of all time, considering how popular the franchise was at this point. This title from Infinity Ward ramped up the sci-fi elements with the game taking place in the far future.

As you can imagine, the game remained similar to previous titles, but the most notable aspect of this game was the space missions, putting players into zero gravity battles. Zombies were updated yet again, and the introduction of being able to craft weapons also featured.

In 2017 we saw Battlefield release one of their best games to date (BF1) and it was set back in the old WW1 days. The battlefield franchise smashed it, so it was no surprise to see Call of Duty returning back to WW2 era, only they didn't quite smash it.

The game mechanics were fine, but the whole game felt like an afterthought. Strangely they decided to remove health regeneration and ruined the fast-paced nature that CoD players enjoy. Multiplayer suffered, but zombies undoubtedly kept some people entertained.

The last game to be released from the franchise was the return to Black-Ops. Black Ops 4 was completely different from previous titles and had no single-player campaign what so ever.

With the new game mode 'Battle Royal' taking the gaming world by storm it is hardly surprising to see Call of Duty tapping into that.  The game was a fun alternative to PUBG only a bit more arcade-like, and it wasn't quite as cartoony as Fortnite.

The new trailers to CoD: MW have us remembering the old days, and this could spark a revival in the dwindling franchise if they nail it.

This title will bring back good quality multiplayer action, breathtaking single-player campaign missions, and if we are lucky some mod tools too!

Its an impressive old list of games from the franchise and it doesn't look like they will be slowing down any time soon!