Home Blog Tips & Tricks Monitors OLED Monitors, Are They Worth The Investment?

OLED Monitors, Are They Worth The Investment? 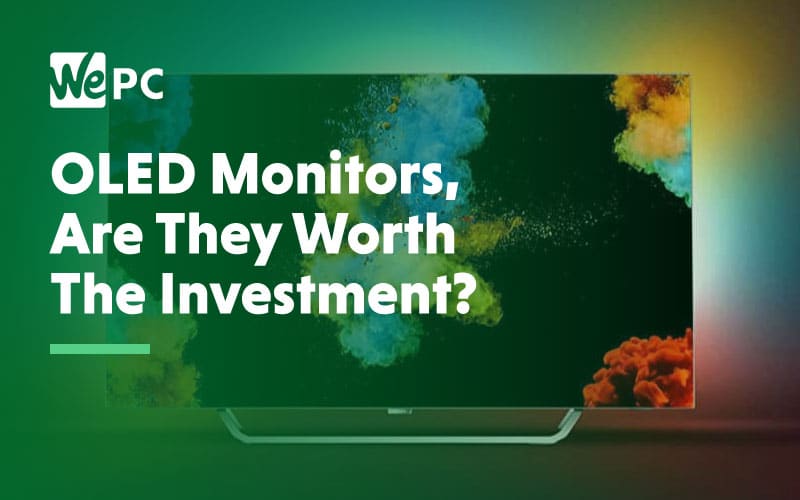 OLED has been making a lot of noise in the technology world for quite some time now boasting an almost infinite contrast ratio due to its true black compatibility, fantastic refresh rates that can match any display panel out there and OLED’s extremely thin and efficient designs. However, OLED tech has been struggling to break it’s way into the computer universe and that’s down to a couple of factors which will be touched upon later. As good as the technology sounds we sit down and try and answer the big question, Is OLED worth your investment.

Let’s start by diving straight into the technology itself, OLED (Organic Light-emitting Diode) unlike LED/LCD doesn’t require a backlight due to its emissive electroluminescent layer which is manufactured using an organic compound that emits light as a result of electrical currents. You’re probably confused asking yourself, what does that mean for the average user? Well to put it simpler, OLED monitors have individual pixels that do not require a backlight as a source but work independently. They can manually switch off completely to create darker darks giving it a much wider contrast ratio, overall producing a much richer image which borders on HDR. With OLED not requiring a backlight they can make use of the super thin layer which replaces it, allowing developers and designers to create something that’s previously never been possible. It allows OLED to have much thinner form factor than LED, which is a huge boost for aesthetic design, whilst still being more power efficient than anything on the market today. Further to this, future plans for the OLED have been announced claiming that developers can design a monitor which is both transparent, flexible and eventually foldable. The thin layer of transparent film which works alongside the light emitted from it’s pixels helps create an image with previously impossible contrast ratio, brighter brightness and vivid colours that utilize a wide colour gamut. All in all some of the best visuals available can be produced with the new OLED technology.

Another huge plus for OLED is how it accommodates excellent response time and refresh rates. Now as a gamer who wants to achieve the absolute best possible gaming experience, along with seamless gameplay which has zero screen lag and tearing, you require high refresh rates and low response times. With OLED’s new tech, developers have claimed significantly enhanced performance over LCD boasting response times as low as 0.01ms and refresh rates peaking at around 1000Hz, which is every gamers dream, basically. However we’ve yet to see this in the practical world and are unsure exactly how much this is going to cost consumers if it were available. My guess however is not cheap. Overall there is a lot to look forward to when OLED eventually replaces LED.

So how does OLED compare to the ever popular LED/LCD monitors that most of us are so used to. Well we’ve touched on a few areas above, better picture quality, higher contrast ratios, quicker response times and higher refresh rates which are all fantastic pluses for the OLED. However is there any downside to the organic counterpart? Below we’ve made a table to display everything you need to know about OLED and LED and how they compare.

OLED isn’t necessarily a new concept and as a consumer you’ve probably seen a fair bit of advertising regarding it, TV’s and mobiles seem to making use of the technology increasingly. However we like to stick to the computer side of things here and as far as OLED monitors go it’s been relatively slim pickings for the last couple of years. Now you’d think with the huge advances in technology and improvements in both response time and picture quality we’d be seeing OLED everything, but you’d be wrong.

BENQ released an OLED monitor a few years back after a CES event to see how the world would react to the new tech. Consumers did seem very keen until they saw the pricetag. One of the issues with OLED in computing is creating a product that is both efficient and affordable, which at the moment seems fairly difficult. BENQ’s OLED monitor hit the shelves at an eye watering $3500, which for most is more expensive than their entire build. They decided to stop selling the product shortly after its release and we haven’t really seen anything replace it since.

Will OLED be worth the investment?

So we come to the big question, is OLED worth it. Well, to answer that question briefly, I’d say no, and certainly not if you are a gamer. The big thing with OLED is the price tag, how can anyone justify spending over $3000 on a monitor when there build may only be between $500-$1000? It’s just not practical and the main reason why BENQ’s monitor didn;t take off. However with the advancements in technology moving faster than ever, I believe it is only a matter of time before something comes along that fits the standards and OLED but is also affordable for the everyday consumer. But until that day comes, were going to have to enjoy OLED via our TV and mobile devices.