What is V-Sync a.k.a Vertical Sync 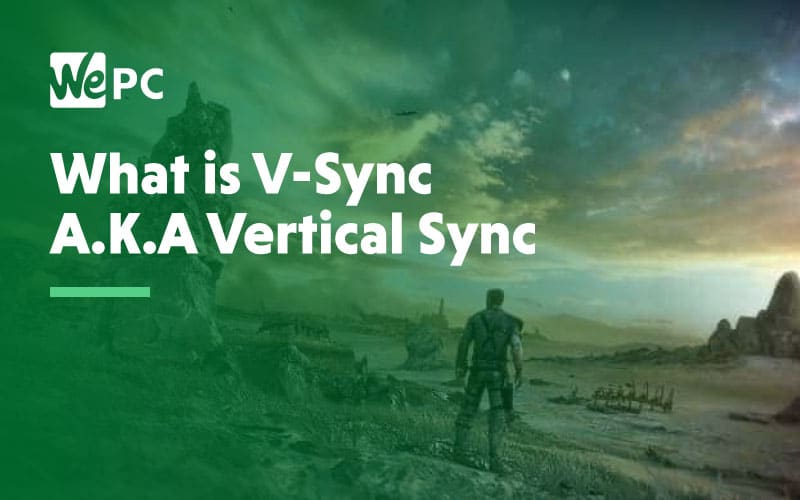 V-sync otherwise known as vertical sync is a technology that was originally designed to accommodate for older monitors limitations and can fix on screen tearing which occurs when your monitor and GPU are out of sync.

Tearing can occur when your GPU is outputting a higher frame rate to the monitors refresh rate and when they are out of sync it appears to us as a screen tear. A way of fixing this is through the use of V-sync which is available to Nvidia and AMD card owners alike. Turning on V-sync will cap your frame rate to whatever refresh rate your monitor is allowing for a smoother experience.

This doesn't eliminate tearing completely even if your monitor has a high refresh rate(144, 160, 240 Hz) as your cards frames will always fluctuate.

The main benefit to V-sync is it’s built-in with your graphics card and of course, is free. It’s an option in the settings of your Nvidia or Radeon card that you can turn on or off.

Whether you have it on or off is down to your preferences and potentially what games you are playing. While off your GPU and monitor will inevitably be out of sync resulting in a screen tear which some gamers just cannot stand to see. Turning on the option as mentioned matches the pair at the top end and can produce smooth results.

Example: If you are playing The Witcher 3, which is graphically fantastic you may prefer the game to be completely smooth so in this instance V-sync would be a viable option.

The bottom line is V-sync can be great for some single player games but only if screen tearing is very noticeable and you will often find on monitors over 120Hz that screen tearing is quite hard to see anyway.

The problems for V-sync are circumstantial and largely depend on what game you are playing and what monitor you are using. If you use a 60hz monitor for example then turning on V-sync will cap your frame rate in-game to 60 fps. If the game is single player and runs without any dips at 60fps then V-sync can be a great alternative to buying a new monitor. If for example you use a 144hz monitor and load up a graphically powerful game which could dip in performance you will get some tearing issues as your GPU and monitor are out of sync at times.

This happens because V-sync forces your graphics card to wait until the monitor is ready for the next frame before sending it through. Unfortunately, if a dip in performance happens then V-sync will halve the frame rate of your graphics card until it syncs back up with the monitor. So again if you were using a 60Hz monitor and experienced a dip then the frame rate of your game could drop as low as 30fps resulting in a stutter.

It was mentioned earlier that it may be best for just single player games and this is because V-sync can sometimes increase the input lag of the mouse by a significant amount. Whether you are in a competitive FPS game or just a single player FPS game this delay can be very noticeable and off putting. It’s worth noting the input delay can be greatly reduced if triple buffering is enabled in-game but ultimately V-sync isn't required on shooters like CSGO or games of lower graphics quality such as LoL.

There are some better alternatives to V-sync that should be considered if you are looking to eliminate screen tearing. Some of these alternatives are just improved versions of V-sync that can be changed in your GPU settings while others can add extra cost.

Enhanced Sync is a literally an ‘enhanced’ V-sync solution made by AMD and can only be used if you had a Radeon card. The issue with V-sync was when the FPS dropped below the refresh rate of your monitor you would be left with a stutter or experience input lag which V-sync is famous for. With Enhanced Sync these issues aren’t completely fixed but they have been vastly improved as when the performance drops Enhanced Sync is turned off, stopping your frame rate from dipping by sometimes as much as 50%.

Enhanced Sync doesn't replace V-sync it works in unison with V-sync because when the frames are normal/ high then V-sync comes into action and the frame rate is capped to match your refresh rate.

Fast Sync is just Nvidia’s take on improving V-sync and does exactly the same thing as AMD’s Enhanced Sync with the only difference being the hardware in your machine.

These alternatives are more responsive than just having V-sync on however they both feature more input-lag than having v-sync off entirely. If you're looking for a money saving option then these advanced versions of V-sync could be enough and are worth trying out before considering the costly upgrades you will see below.

G-sync is an adaptive sync technology created by the graphics card giants Nvidia. The technology was created to help prevent screen tearing and it did this by synchronising monitor refresh rates to graphics cards frame rate dynamically, ultimately ending in some silky-smooth gameplay.

To learn more about G-Sync visit our short article here.

Freesync is another adaptive sync technology but developed by AMD. Freesync does the same thing as G-sync however its quality can vary depending on the monitor it has been implemented in. Unlike G-sync, it’s open source so monitors don't require a proprietary module from the developer themselves which creates a competitive market and reduces the cost.

Should I turn V-Sync on or off?

V-sync can cause a bit of a headache for some people and it’s clear to see why. There isn’t a definitive answer as to whether you should have it on or off (thats why there is the option) and it's largely circumstantial if you are going to see any benefits.

If you are consistently getting more frames than your refresh rate then V-sync can be switched on as you won't experience any drops in FPS. For maximum performance from your game, it is best to have V-sync switched off. Having V-sync off can be more beneficial to anyone using a 60Hz monitor or with lower spec PC but you will experience tearing.

Whether you have V-sync turned on or not is down to if you notice tearing and if you can tolerate it. While turned on triple buffering should be used to compensate for the input lag and FPS dips that can occur and although this improves performance slightly it's still not as effective as turning V-sync off.

If you don't like the downsides to V-sync then G-sync and Freesync are worth looking into however if you want to try sorting your tearing issue for free then try turning on enhanced or Fast sync in your respective graphics cards settings. You can always give smooth gaming a try and if you experience any noticeable input lag or dips in performance you can always turn it back off again so give it a whirl.