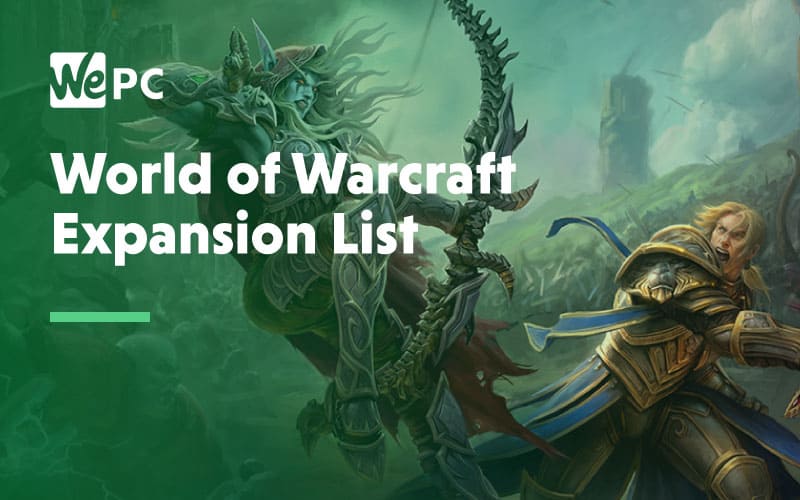 When it comes to MMORPGs, it may not have been the first, but WoW is definitely the most popular. When it first released in 2004, it took the gaming world by storm and its domination of the genre has never slowed. Following on from the highly-acclaimed Warcraft III – The Frozen Throne, WoW opened up the world of Azeroth to become one of the most explored worlds in gaming. But, they didn’t stop with just the base game. Over the years there have been many World of Warcraft expansions, and we’ve gathered them all into one handy list.

So, whether you’re for the Alliance or the Horde (Horde, all the way right here), here’s a round-up of every expansion that has been released for WoW, in chronological order.

It may seem obvious but, this is a spoiler warning for the storyline of both World of Warcraft and Warcraft III.

The first WoW expansion on the list brought a lot to the base game when it was released. It introduced two new races in the form of the Dranei and the Blood Elves as well their race-specific starting zones to the overall map of Azeroth. This opened up more customization options for character creation, as well as a whole host of additional lore, questlines, and areas to explore.

Outside of Azeroth, there was a lot of additional content centered around Outland, and area players had already explored in Warcraft III. Here was the only place in WoW players could get their hands on flying mounts, and it also introduced a number of recognizable characters from Warcraft III as the new villains.

The Shaman and Paladin classes were no longer only available to Horde or Alliance members, respectively. The Burning Crusade opened them up to players of either faction, allowing for even more character options. The level cap was also increased for the first time – rising from 60 to 70 as it also introduced new abilities along the way. There was also the introduction of a new profession; jewel crafting, that allowed players to customize their equipment.

There were also changes made to the PvP system – something every good MMORPG has to include. It altered how damage was received in PvP circumstances, helping to balance out the existing system for players. There was also the addition of Arena PvP for the first time, as well as additional PvP battlegrounds to conquer.

After the popularity of the first expansion, The Wrath of the Lich King also sought to include more content based on the world and lore players had experienced in Warcraft III. This second expansion was all about the well-loved anti-hero Arthas. His character was crowned the new lich king at the end of Warcraft III, and WoW used this expansion to continue his story.

This meant we were granted another new map in the form of Northrend, although this version had a lot more detail and variation than the map we were used to from Warcraft III. While we didn’t see any new races introduced with this expansion, there were still a whole host of new features for players to explore.

We were given the first hero class of the game with the introduction of the Death Knight. This new class began at level 55 and came with its own starting area and profession. Runeforging was a way for Death Knights to improve their weapons.

Speaking of professions, the new primary profession of Inscription was added with this expansion. Players were now able to inscribe magical “Glyphs” to enhance their abilities, as well as create scrolls that could provide them with temporary buffs.

PvP got another update with the addition of two new battlegrounds and two new arenas. They also launched the first PvP world into the game in the form of Wintergrasp. And, finally, the level cap was once again increased, this time up to level 80.

When The Wrath of the Lich King was over, Blizzard had killed off two of their most featured characters, and so it’s not surprising that the world of Azeroth was forever changed with the launch of Cataclysm. For this expansion, they brought back a much older villain in the form of Deathwing.

This expansion brought with it two new races; Worgen for the Alliance, and Goblins for the Horde. Again, these races each brought their own starting areas and lore with them. But, what would easily be one of the biggest changes with any other expansion was merely the starting point when it came to Cataclysm.

Nearly every area in Azeroth was altered thanks to the events of this expansion, with some ending up totally unrecognizable. This was the biggest map shakeup of all the expansions and made a huge impact on quests, lore, and gameplay. We also got two more PvP battlegrounds as well as the new PvP area of Tol Barad.

The Archaeology profession was added, which allowed players to dig for ancient artifacts. And, the ability to reforge items became possible, helping you to make your items as useful as possible by tweaking their stat bonuses. Guilds could now obtain levels of their own which came with guild-exclusive perks too.

The classes were all redesigned and tweaked for smoother gameplay, and the level cap was bumped up again, taking the max level up to 85. But, most importantly, out of all these updates was this one: you could now fly in Azeroth for the first time.

Possibly the most divisive expansion Blizzard ever released, Mists of Pandaria brought a number of new features to the game. The most notable was, of course, the addition of a new race – Pandaren. This was the only race that could choose to play as either Alliance or Horde instead of being tied to one side. Their starting area was isolated from the rest of the game, with players only being able to choose a side when they had reached a high enough level to leave their home island of Pandaria.

There was also the introduction of a new class – Monk, which focused on hand-to-hand combat but could also hold their own as a tank or healer. And, once again, the talent system had an overhaul making it much simpler to use for players. The level cap was also increased again, now reaching a max level of 90.

There was also a lot of extra content added outside of the main storylines. Three man dungeons were introduced, as well as challenge modes for the regular five man versions. We also got three new PvP battlegrounds and the brand new Pet Battle system. This system divided fans in its Pokemon-Esque fashion but was never integral to the storyline.

Warlords of Draenor takes us back to a pivotal moment in history and gives players the chance to experience an alternate timeline concerning the fate of the Orcs of Draenor. We travel back to when Draenor was still whole and see what would have happened had the orcs not made a deal with the Mannoroth.

With this expansion, we were treated to some much-needed graphics updates with improved character models and a general rise in the quality of graphics used throughout the game. There was also a big focus on streamlining and improving the existing gameplay with the introduction of the Group Finder for PvP and PvE, as well as a redesign of both the inventory and quest log.

One of my favorite additions with this expansion was the introduction of Garrisons for high-level characters. These effectively acted as customizable bases that allowed you to take part in new, unique activities, and really made you feel like your character was important.

There were also, as always, new PvP updates. We got a new zone called Ashran, as well as the introduction of Skirmishes that allowed low-level characters to get used to the kind of combat you would see in more advanced PvP arenas.

Legion takes us back to the “main” timeline of the game just as the approaching Burning Legion breaks through. We’re introduced to the new continent of the Broken Isles, also taken from Warcraft III and our new villain – Sargeras.

We also got our second hero class with this expansion in the form of the Demon Hunter. Unlike the Death Knight from earlier releases, this hero class could only be played by Night Elves and Blood Elves. We were also treated with a new system called “Class Orders” which allowed players to gain class-specific rewards and campaigns.

The level cap went up to 110, and players now had access to artifact weapons that could be customized heavily and leveled up with their characters.

In terms of PvP, they did away with PvP gear, instead, they replaced it with a new honor system that allowed the acquiring of new abilities using their honor points instead. PvP gear was now useless in combat.

With what has to be the best cinematic out of any of the expansions, Blizzard released Battle for Azeroth around one year ago. I still get chills every time I watch it, and often myself screaming along with Sylvanah to “FOR THE HORDE!”.

While previous expansions have focused on players banding together to defeat some great evil, Battle for Azeroth instead brings us back to one of the core storylines of the game – the war between the Alliance and the Horde. The focus for this expansion has undoubtedly been on PvP, with the game really turning its focus in that direction.

They also introduced a total of eight new races into the game, even though they were really just expansions of existing races. For the Alliance (it hurts just writing those words) there are Kul Tiras Humans, Dark Iron Dwarves, Void Elves, and Lightforged Dranei. For the Horde (that’s better) there are Nightborne Elves, Mag’har Orcs, Zandalari Trolls, and Highmountain Tauren. We were also gifted with two new landmasses – the islands of Zandalar and Kul Tiras. The level cap was increased again, this time up to 120.

We also got two new PvP arenas, the ability to toggle off PvP no matter what realm players were in, and another refresh of the honor system. In terms of PvE, we were gifted Warfronts, which are huge scenarios inspired by old school Warcraft games, as well as Island Expeditions which are designed for three players.

Since it’s initial release, World of Warcraft has changed immensely and in my opinion, for the better. But, for those who miss the days of yore when all we had to play with was vanilla WoW, the World of Warcraft Classic release is just around the corner – so you’ll be able to relive your glory days once again (minus the bugs, and with better graphics).

Do you have a favorite expansion? Are you Horde or Alliance? Let us know in the comments.