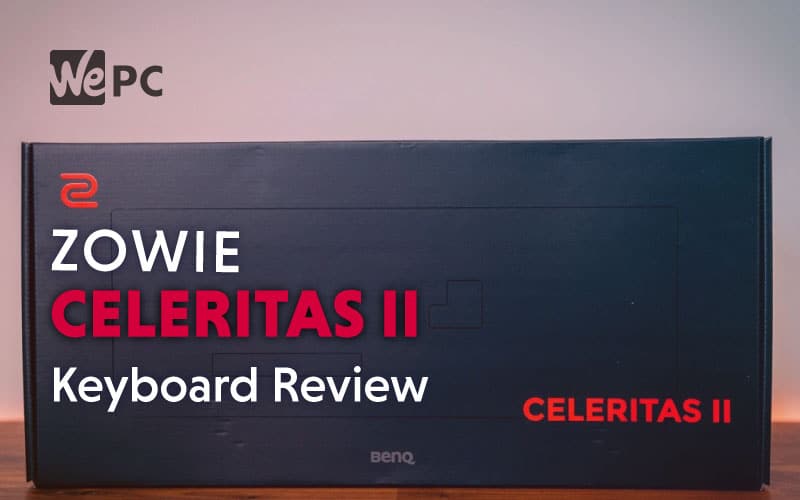 Simple yet elegant, Another classy product from Zowie this time in the shape of an e-Sports ready keyboard. The Celeritas II performs as well as it looks.

Zowie is sometimes hailed for their simplistic solutions for gaming as they often deliver functional products that still look and feel premium. The Celeritas II is no different and it helps Zowie close in on completing a peripheral set with just maybe a headset to go.

The Celeritas II keyboard is a stroke of simplistic genius as the keyboards understated design looks phenomenal. Some may consider the design boring but it is down to preference and this board features some interesting switch development under the keycaps to make up for it. It’s home to optical switches, which are some of the most responsive I have ever used and the board was a pleasure to type and game on. The Celeritas II may not be packed with all the features and RGB you come to expect for a keyboard at this price but it’s hard not to admire when it’s on your desk and it was made with professional gaming in mind. 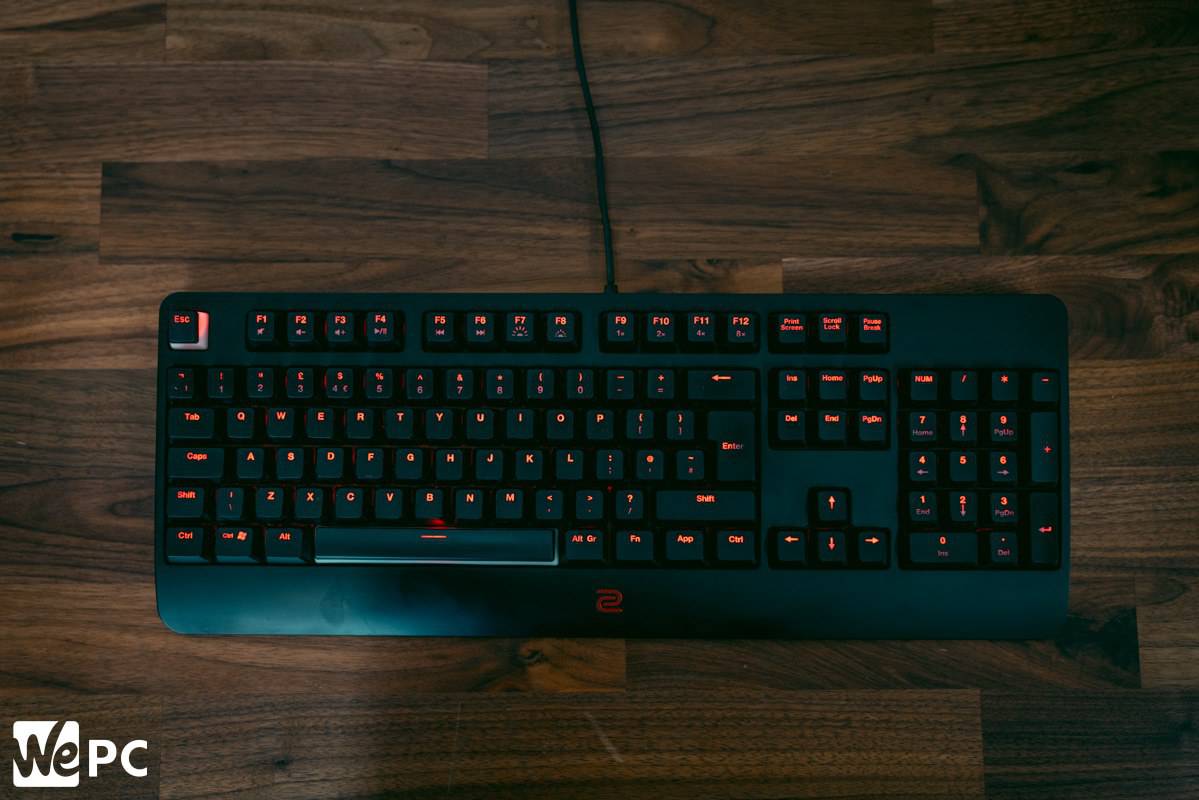 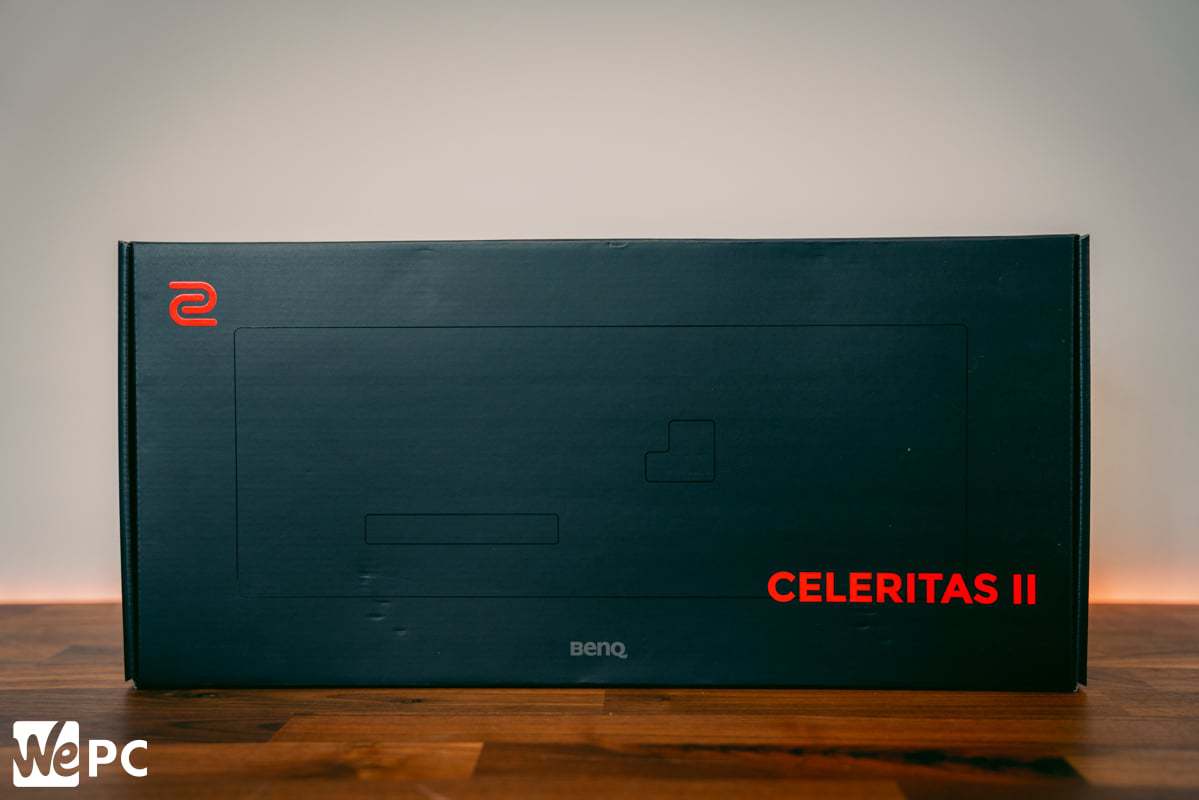 The box for the Celeritas II follows other Zowie products which seem to match the colour of the product inside. We have a plain black box with a lifesize drawing of the board centered on the front. It’s elegant packaging and does a good job of making it have a more premium feel. 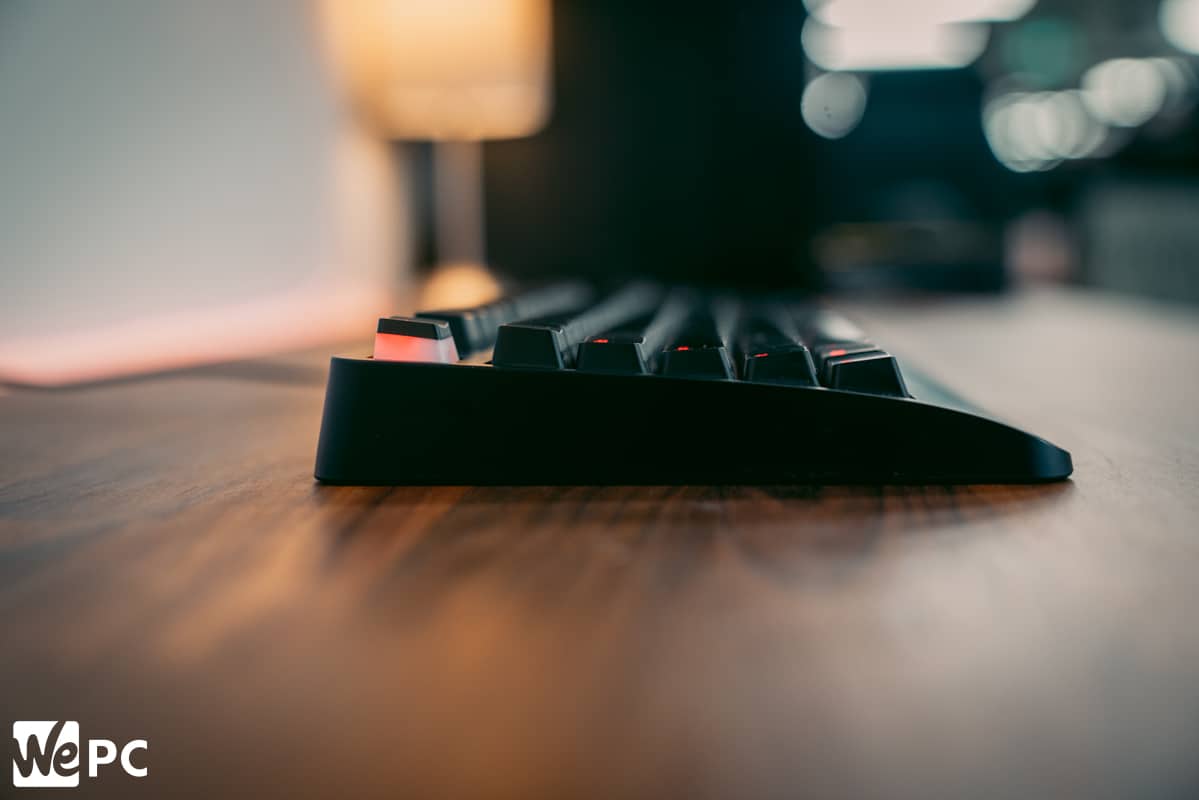 The Celeritas II is a full-sized keyboard (100%) encased in a thick, sturdy shell that makes the board look and feel solid. It has a length of 44.2 cm which plonks this board roughly in-between the Corsair K70 and the ROG Strix Flare. This is one of the wider boards I’ve used (17cm) but only by a few millimetres and it isn’t because of dedicated media keys like other keyboards for once. The Celeritas II case is elongated to give you half a wrist rest which seems more for aesthetics than functionality but still provides comfort. The depth is virtually the same as the Corsair K70 MK.2 board at 3.8mm and it appears to be very chunky.

The weight of the board is 1890 grams and is the heaviest board I have ever used. It has some serious heft to it but only when comparing to other boards otherwise it won’t be that much harder to transport if you are used to lugging full-sized keyboards around. I’m a big fan of the weight as the board is cemented to my desk and it just makes it feel like a very durable product that could survive a nuclear blast (doubtful). It would have been nice to see a TKL version of the board for anyone who doesn’t like 100% boards but also for regular tournament goers who don’t want this extra kilogram in their luggage. 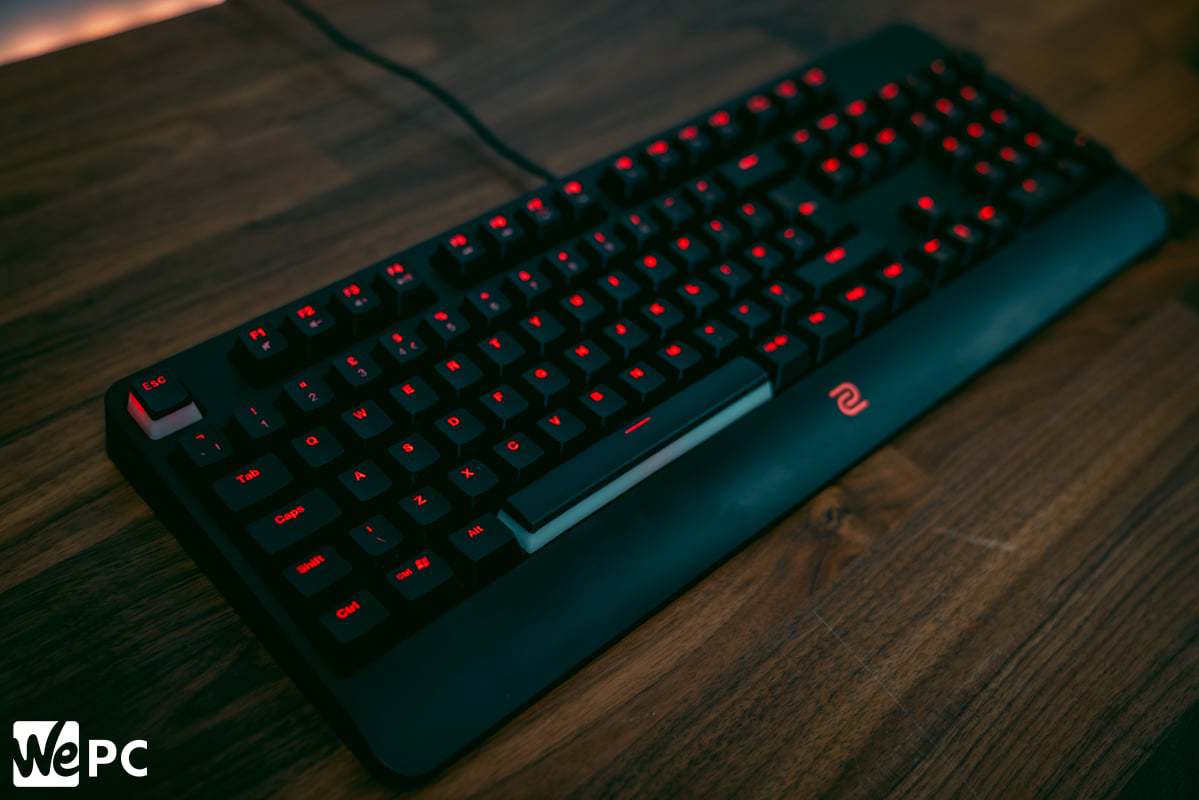 Standard black OEM caps are used for the board with that slight ergonomic curve for comfort and the unoffensive font that we see across many keyboards. The keycaps are made from ABS plastic and have a clear legend to help the backlight penetrate. The keys pick up dirt like most boards but the main issue with this standard material for caps is that it does wear down a lot easier. I would prefer to see manufacturers taking this into consideration for keyboards over £100/$100 and implement PBT caps as standard.

The switches on this Zowie board are my favourite feature. I had never used an optical switch before so I took the cap off and had a look to see what was revealed. There is an LED separate to the backlight of the switch that beams constantly when the button is pressed, the beam is then reflected through the switch into the LED sensor resulting in a keypress. This type of switch is similar to what is used in console pad trigger buttons but don’t let that put you off, it’s essentially just using light instead of an electrical signal. The Flaretech switches are available in red or blue and follow the same characteristics as Cherry switches, the red switches featured in this board are linear and have no tactile bump. Overall the switches seem more reliable and you are less likely to make any accidental double presses when you compare it to Cherry MX Red switches. 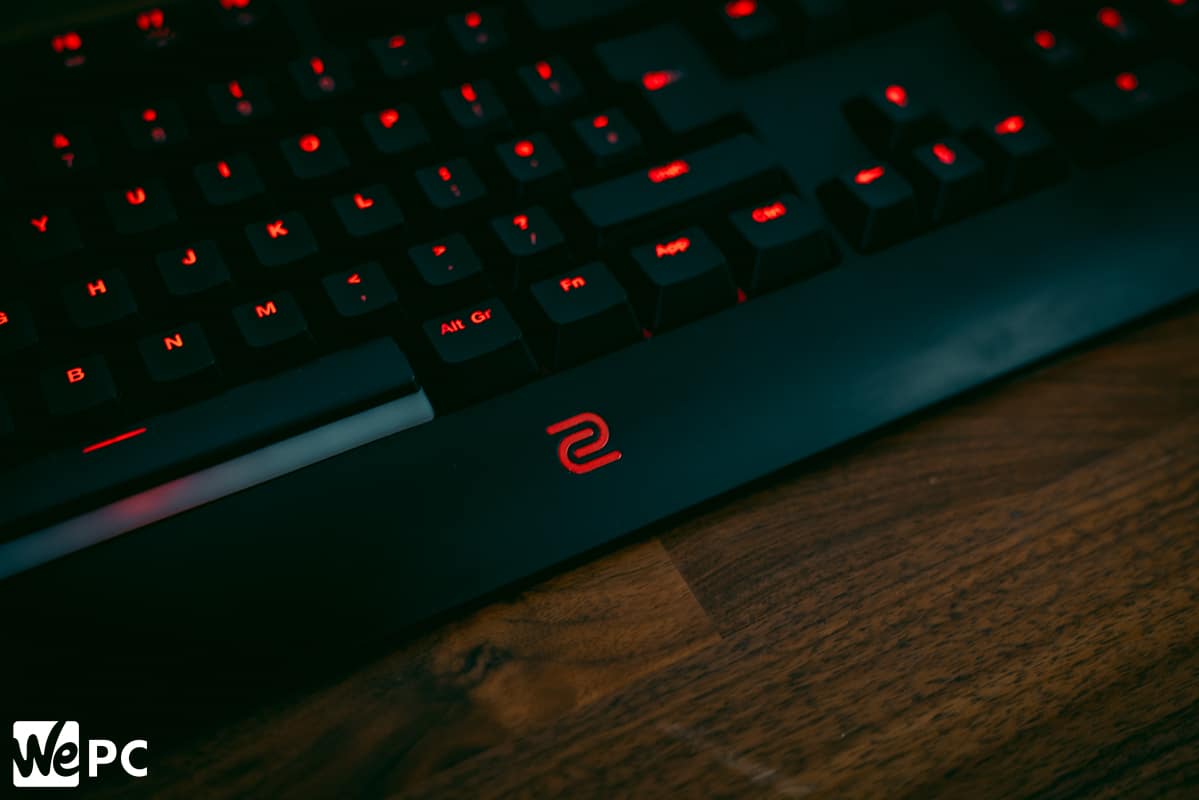 I have seen some people refer to this keyboard as boring or plain when they talk about its design and features and I completely disagree. The board sits on my jet black mouse pad next to my black mouse, black monitor, and black bungee where everything is red and black and the setup looks stunning to me. It’s down to preference as we all know but wait till you have one of these boards in your hands before you decide if it’s boring as I think it’s one of the sleekest boards on the market and would look good on anyone’s desk. The keys appear to sit in the case rather than float which is an equally attractive design. So yes it’s a simplistic full-size keyboard and its a fantastic one.

It’s your standard shape but the edges have been rounded. The board has an angle to it and from the side, its shape resembles a doorstop with the thin end being underneath your wrists. It feels like quite a unique design and they have done this as there aren’t any flip-out feet to create that angle which is great unless you prefer a perfectly flat board. Regardless of the lack of a stand, it’s comfortable to use from the get-go and even after a few hours of typing it continued to be an enjoyable keyboard. The board is completely black and is accompanied by some red backlighting which I’m a fan of as the two colours do go well together, especially on peripherals. The shape is wider than most due to the bottom section protruding out like a mini wrist rest but other than its aesthetic appeal its nothing worth noting. There are no media or macro keys around the outside of the board which adds to its understated simple feel but there is a little bit of room above the number pad which I would have preferred to see some dedicated media keys or a volume scroll bar. There are some function buttons doubled up with the F keys at the top of the board which you can control media by using the Fn key along with these.

The material reminds me of the shell to my FK1+, it’s matte black plastic with a soft touch feel and looks superb. It contrasts the standard ABS plastic keys nicely but it does seem to pick up dirt really easily, especially fingerprints meaning if you are a little OCD you may need to get some baby wipes too. There is no give in this material, the board is completely solid and feels excellent to hold.

The branding is kept to a minimum as we would expect apart from a nice etched BenQ logo on the side and that’s it apart from the Zowie logo down the bottom. The underside has nothing going on apart from 4 extra-long rubber feet to provide grip not that this board will move much due to it being a bit of a fatty. The Celeritas II has a no-nonsense cable to go with it, like the Zowie mice it’s a non-braided rubber cable and unfortunately, it can’t be detached. The cable is around 1.8 metres long and you won’t get any issues with the cable as the keyboard is rarely moved but considering this is aimed at e-Sports professionals who travel globally I’d of liked to have seen extra protection.

As soon as you plug in the board you are met with the vibrant red backlighting and it gives a fantastic visual first impression. The backlighting illuminates the legends from an LED on the switch itself and it’s vivid red colour. They added a bluish-white LED to show when caps lock or number lock is activated rather than having an LED located at the top of the board which we had become used to which is a nice feature but it doesn’t really matter. That’s it for lighting with this board and it’s not like the Asus Rog Strix Flare when it comes to RGB customisation but if you are considering the Zowie board this probably won’t deter you.

The features to this board are minimal and it’s not for everyone but if you are a streamer or MOBA player who needs some serious key customisation then this might not be for you but for casual and professional gamers alike the board does everything you want it to without looking like a Christmas tree. It is worth noting there are some function keys aside from the media ones, you can alter the backlighting brightness and adjust the speed of keystrokes by 1, 2, 4 or 8 times.

The switches’ performance for typing was excellent I found accidental presses were kept to a minimum and I still got nice audible feedback from them that wasn’t deafening. The actuation distance to these switches is 2mm which is similar to the Cherry MX Blues and they have travel of 4mm too. The actuation force is 45g which is the same as the Cherry MX Reds however with the optical switches you get a reduced bounce time. Bounce time is how long it takes the key to ‘bounce’ back into position after a keypress. Now, these Flaretech switches boast a 0.3ms bounce back which might not be noticeable to our human senses but it’s still faster than cherry and this could be a big factor for serious gamers looking for faster response times.

So most keyboards around this price point will usually be packed with features or millions of colours to illuminate your desk but Zowie went a different way and its something I appreciate. don’t get me wrong I’m an avid fan of RGB in keyboards but it depends on the board and you can help but think RGB would totally spoil the design of this keyboard. I’m not sure why it’s so heavy though it feels great however seeing as its aimed at pro players I can’t quite work out why they would make it harder to transport, I mean at least make the cable detachable! Anyway, complaints aside its one of the nicest looking boards I have had the pleasure of using and I realise maybe simple and understated is the best way to go. Its performance is top drawer, whether I was in-game or typing up this review I had zero issues and a high level of consistency. So if the weight and lack of features don’t worry you and you’d love a sleek and stylish board then you should really consider the Celeritas II from Zowie.

Simple yet elegant, Another classy product from Zowie this time in the shape of an e-Sports ready keyboard. The celeritas II performs as well as it looks.