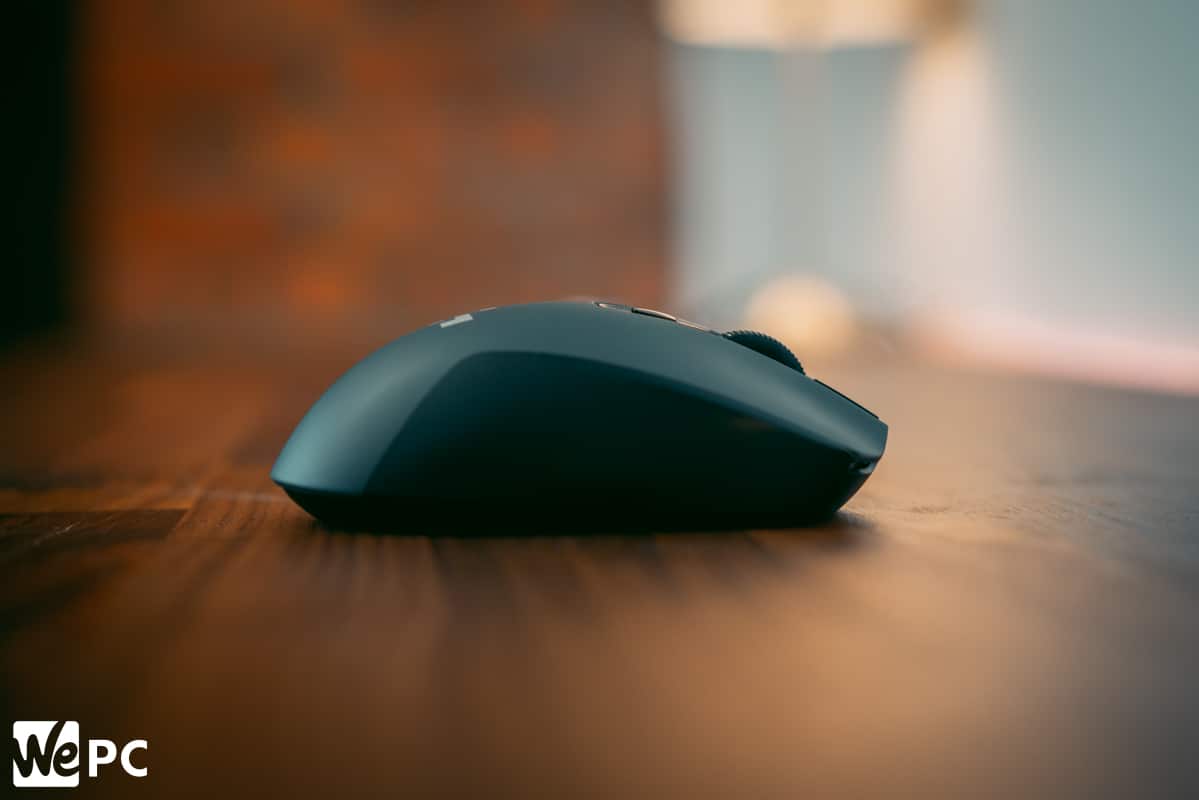 The G603, a right-handed all-round performing gaming mouse that comes with high-end specs and won’t break the bank!

You would always go for quality over quantity with a gaming mouse right? but it would seem Logitech is doing both. They have a multitude of wireless mice options and a lot of them feature high-end specs in terms of hardware. The G603 is no different, a now outdated mouse but fitted with a top-of-the-line sensor, quality switches, great design, and ridiculous battery life. This wireless underdog has a simple design much like the G403 and is engineered for right-handers. The G603 features Logitech’s Lightspeed technology that you also see in the G Pro and will give you a report rate of 1ms.

I enjoyed using this mouse it obviously felt similar to the G703 and it seems to tick several boxes. Its ergonomic design is comfortable and it’s not too heavy even with 2 x AA batteries. So if you fancy a mouse that’s inexpensive (under £50/$50), fitted with the highly regarded HERO sensor, and want a battery that lasts a couple of months not weeks then the G603 could be perfect. 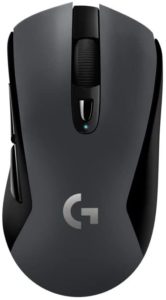 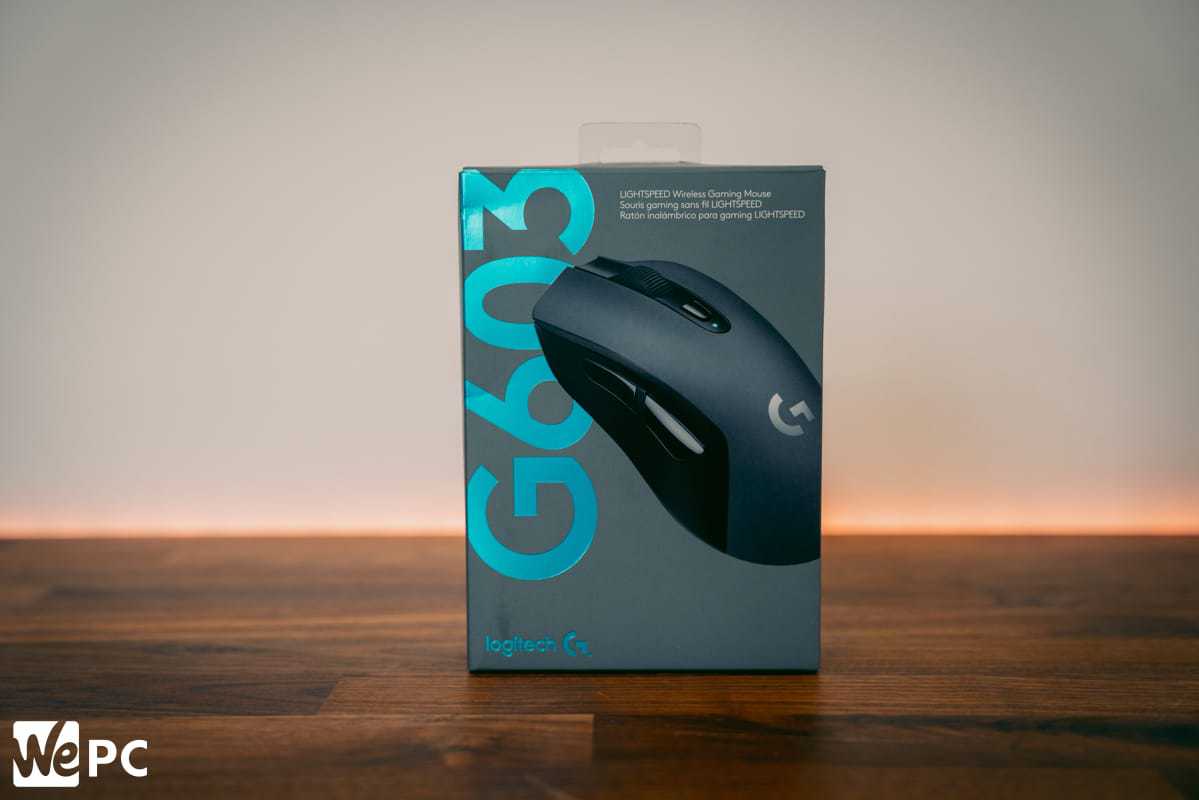 There are no thick card boxes or fabric tabs with the Logitech mice. It arrived in a simple unobtrusive box and oozes functionality like Logitech products.

Inside you’ll be getting: 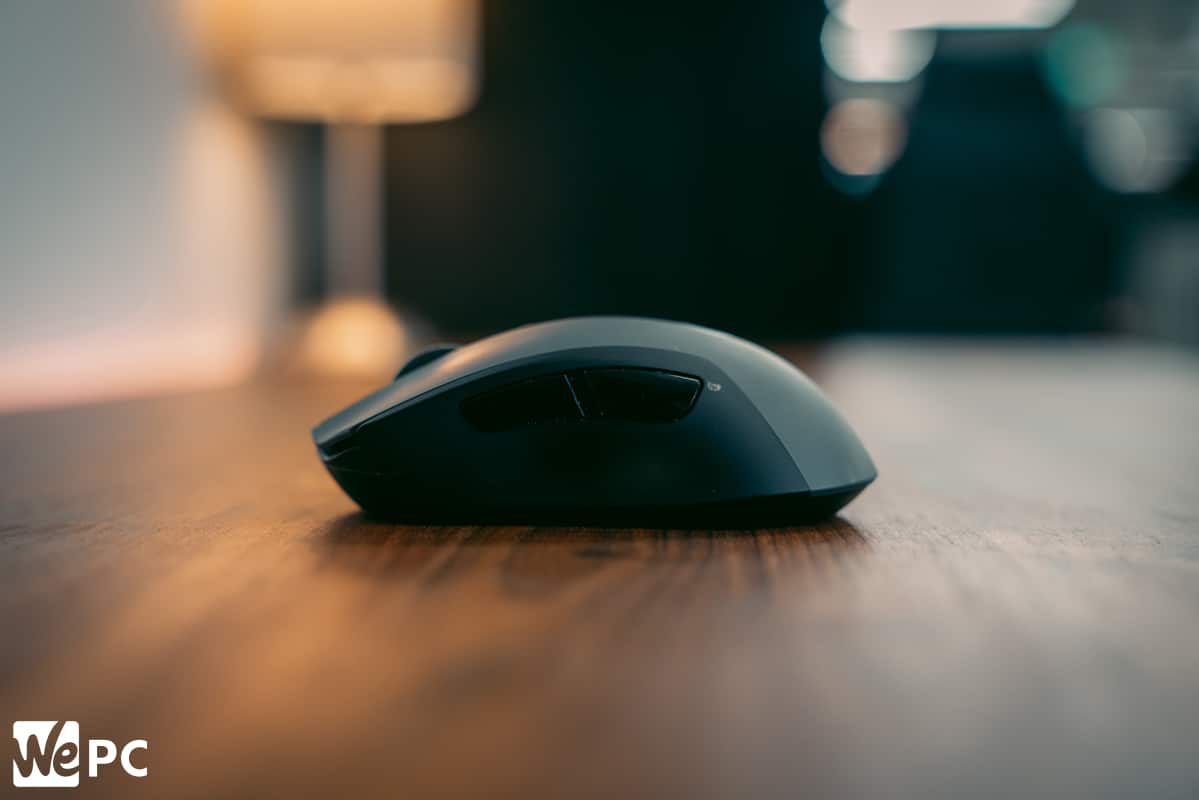 The G603 is a medium-sized mouse with the exact same dimensions as the G403 and G703 (12.4 x 6.8 x 4.3 cm), which make it a good enough size to keep a lot of my hand off the desk while using a palm grip. The size and weight of this mouse are actually really comfortable, you could use any grip with this mouse and it didn’t leave my hand or wrist feeling fatigued while playing.

With 2 x AA batteries, the G603 sits at 135 grams which isn’t the heaviest mouse but its up there. Despite this weight, the mouse is easy to move and glides effortlessly but I found there to be more friction on my QcK cloth pad than other Logitech wireless mice. The weight can be lowered to a very respectable 112 grams by removing an AA battery making the G603 a similar weight to the G703 and G903 whilst also having around 10 times more battery life. The mouse feels a little bottom-heavy towards the back due to the batteries which could make it difficult for small-handed fingertip players. The weight didn’t affect my gameplay though even after a few hours as I prefer my mice to be over 100 grams for FPS games. 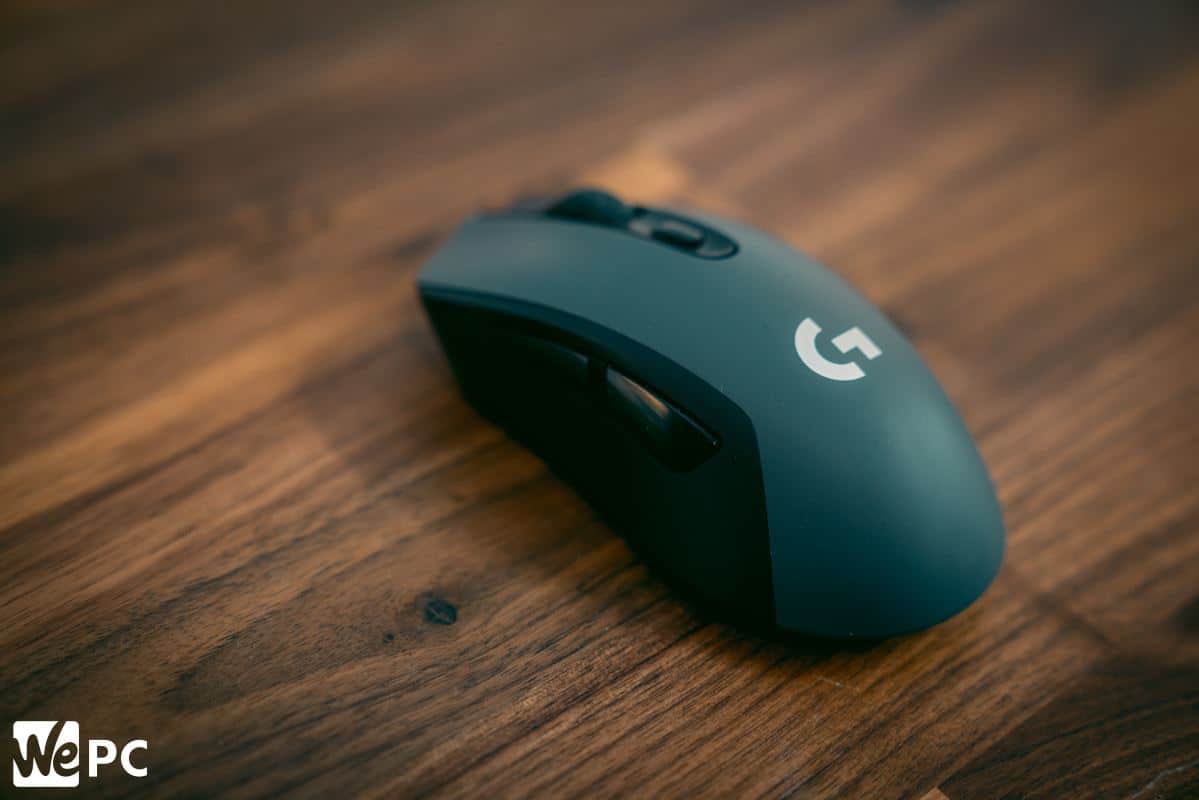 The shape of the G603 is a familiar one and it would no doubt look at home on anyone’s desktop. It has the same generic curve that’s usually most comfortable with a palm or claw grips and is indistinguishable from the G703 at first glance. The G603 was ergonomically designed to sit in your right hand snuggly with a steep curve going in below the thumb buttons and subtly out where your ring finger/ pinky sits. The body of the mouse is comfortable to rest on at 4.8 cm’s high and almost moulds into my palm. It’s a chunky mouse with a natural shape and as a right-handed gamer this is a shape I will always lean towards.

The texture is the same robust plastic we see in a lot of the Logitech wireless range however with the G603 there are no rubberised sides to grip on to. The grips aren’t a big deal I used this mouse over the course of a few days and I didn’t lose control or have to readjust my grip once while gaming. Just like with the G703 the main switches slope up towards the mouse wheel only this time the buttons aren’t separated from the main shell. The shell flicks off easily exposing the bare mouse and slots back into place without any effort thanks to magnets. Under the shell is where you can change the batteries and store your dongle for transport. 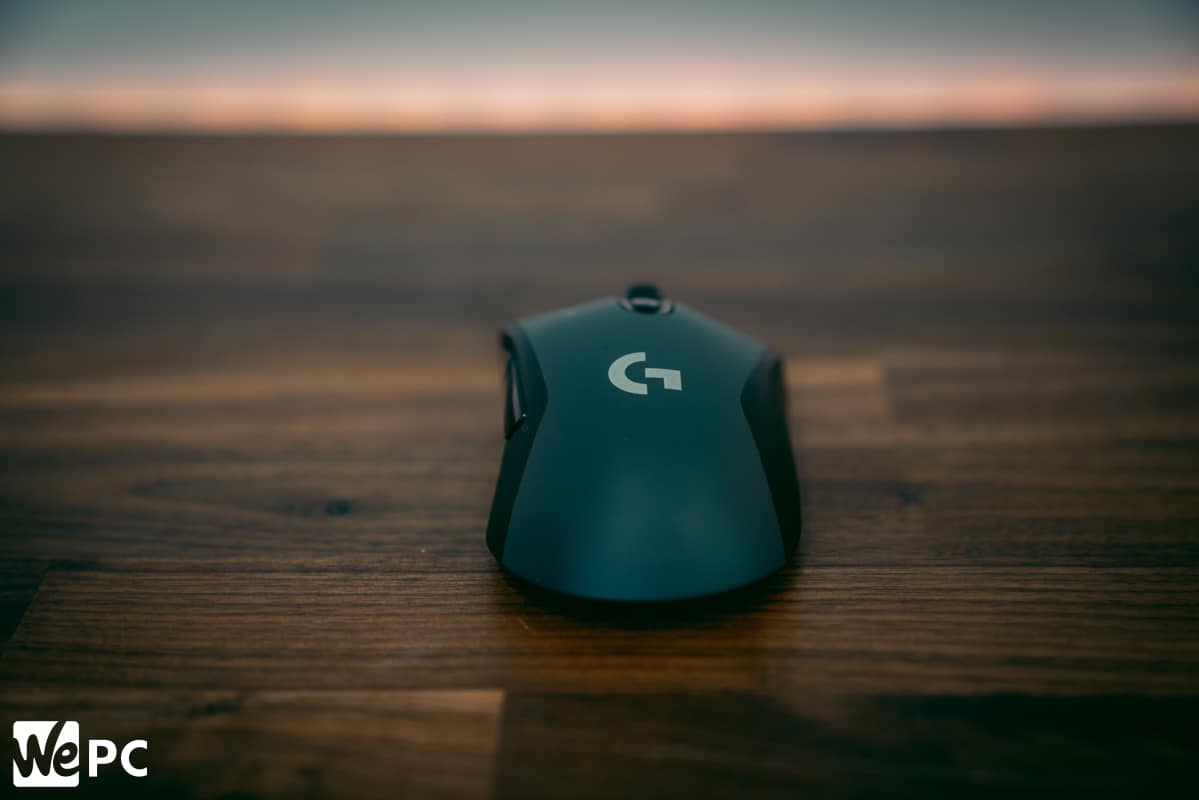 Nothing really new in the button department we have 6 programmable buttons on the G603. You’ve got your main buttons that are no longer separated from the rest of the shell-like the G703, you’ve got your clickable tactile scroll wheel with a nice rubber texture, a DPI button, and 2 thumb buttons.

The main buttons house Omron switches which are durable enough to withstand 20 million clicks. The main buttons feel a bit stiffer to press than the G703 as they have a firmer actuation but they still have a nice audible click to them like the G Pro. I didn’t notice any issues with this stiffness in-game or at all really until I started comparing it to my G703. Like a lot of mice, your thumb buttons are pre-programmed to go back and forward on the internet browser and they feel very reliable. The thumb buttons are smooth with a low profile and in a good position allowing my thumb to slide up easily. The DPI button cycles through preset DPI settings.

On the underside of the mouse, you have a connectivity button that will allow you to connect using the onboard Lightspeed wireless technology or via Bluetooth if you lost/forgot your dongle. The mouse features what Logitech calls an ‘Advanced Power Management’ button which is basically a button to change your report rate from HI (1ms) performance to LO (8ms). I didn’t really see the point in this report rate button as the battery life on this thing is immense but if you are quite frugal you may love it. 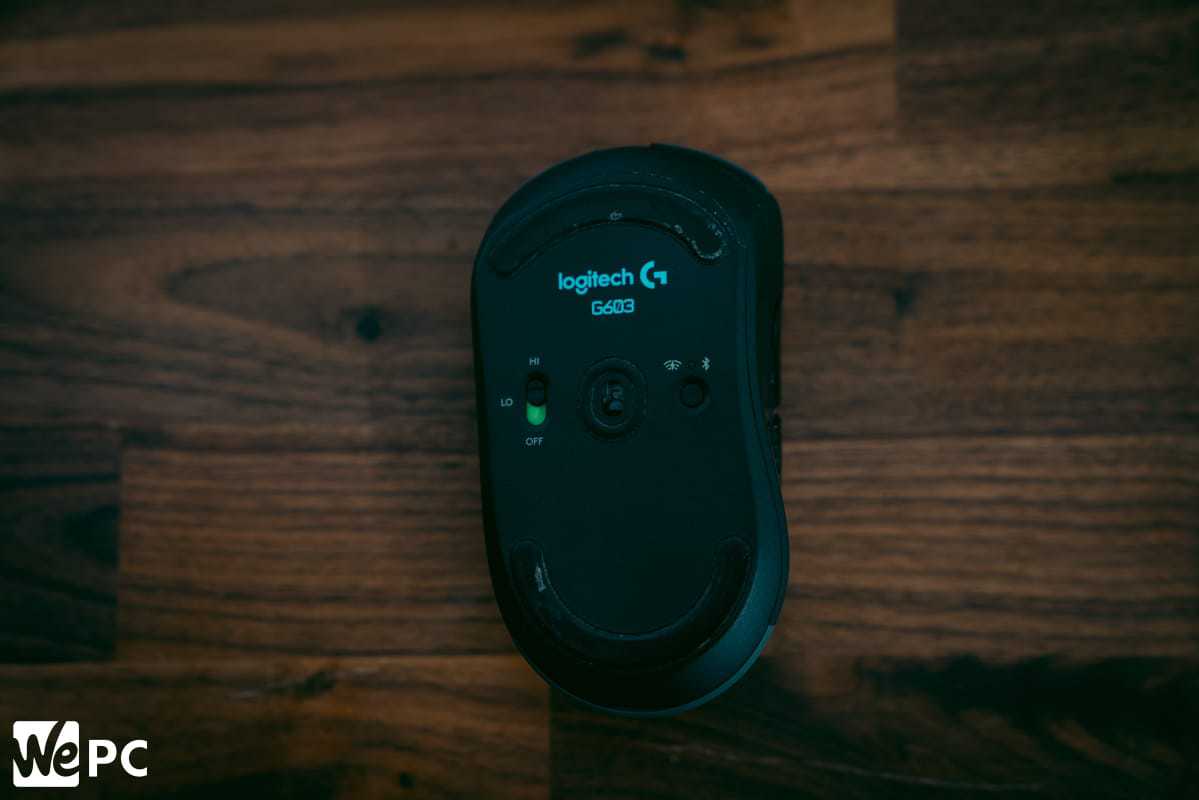 The main selling point to the G603 is the vast amount of functionality that oozes from under its shell. This model was the first to take Logitech’s latest optical ‘HERO’ sensor out for a spin and it didn’t disappoint. Years were spent designing this new technology which basically gives you similar performance to the beloved PMW3366 while drawing a lot less power. The HERO sensor has zero smoothing, filtering, and acceleration just like the PMW3366 but the HERO has a jaw-dropping 10x the power efficiency. After a few hours of usage the sensor felt like it was locking on to opponents in CSGO, it wasn’t but the precision was mind-blowing for a brand new mouse.

Tracking heads in CSGO was relatively easy with this sensor. The HERO sensor performed exceptionally well and I now regard it as good as the TrueMove3 sensor in the Rival650 for performance. I don’t know if it’s a placebo effect or whether we can even tell a difference in the performance between the G703 and the G603 but snapping between two targets has never been easier than with this sensor. Despite the weight, the mouse felt like an extension of my arm and glided effortlessly following every command with precision.

The sensor has a DPI range of 200-12,ooo and an IPS speed of 400 so tracking was never an issue. While playing on low sensitivity I usually flick the mouse with large fast movements but I never experienced any loss in tracking. There didn’t appear to be any unwanted movement from the sensor even when zoomed in with a sniper, it remained stable and accurate. For me the G603 outperformed the G703 and G903 when testing in-game, it has a great ergonomic body paired with a better sensor overall.

Now due to the absurd battery life of this mouse, I was unable to test how it responds on low battery but the connectivity of the mouse was top notch and it never dropped or lagged once. The mouse features the Lightspeed wireless technology that Logitech has rolled a lot of their wireless mice out with. The technology is brilliant and I haven’t once faced an issue with it. It gives you a report rate of 1 ms and I couldn’t tell the difference in performance between this and the wired mice at my desk. You have the option of connecting this mouse via Bluetooth if you needed to although I’m not sure why you would connect a gaming mouse via Bluetooth in the first place. Now if you’re a very economical gamer the power saving button located on the bottom might tickle your interest but don’t get too excited. The button simply switches from 1ms and 8ms and can prolong the battery life.

The G603 had the longest battery life I’ve used in a mouse, now I couldn’t say if it boasts the longest but up to 500 hours could surely please everyone. If you wanted the maximum battery life with this mouse you would have to deal with a weight of 135 grams as it uses 2 x AA batteries. This weight puts the mouse in the heavier bracket but you can lower it and remove one of the batteries giving you a competitive weight of 112 grams. With just one battery in the mouse feels lightweight and will still give you up to 250 hours which is no mediocre amount of life. The mouse comes with two alkaline batteries as standard they are durable but heavy. You can purchase rechargeable Ni-MH batteries that weigh significantly less and some people have managed to shave the weight down to as little as 105 grams. These few grams will probably only matter to some hardcore gamers but at least there is an option.

You won’t visually see your battery run down like you may be used to with other mice even if you left it on for the entire week it just doesn’t seem to move. Of course, there is no charging time for the G603 but every couple of months new batteries will have to be purchased and it makes more sense to pay a bit extra for rechargeable ones in the long run. It’s worth noting this mouse cant become wired like others as there is no charging cable only an extender cable to give you better reception from your dongle receiver.

As I have said Logitech’s G-hub software is superb, it’s user-friendly, responsive and I don’t have to log in! Now there is no RGB lighting to customize with the G603 but you can still tailor your settings to match how you play. You can adjust the DPI in the software but it is already preprogrammed and saved on the onboard memory. Once the DPI is changed you can now hit the DPI button saving you the hassle of going into the software again. There isn’t a profile button with this mouse so to switch profiles you would have to go into the software as I don’t think you can program the others to carry out this function. You can change the polling rate from 125 Hz to 1000 Hz and the software tells you if you are in HI or LO performance mode but you can easily see this by turning your mouse over.

The G603 is one of the best value for money mice I have ever tested. I already loved the shape from using the G703 but with the HERO sensor, it gave me great confidence in this mouse. It delivered high performance without compromising battery life which is very hard for a wireless mouse to do. The more efficient HERO sensor made this possible working in tandem with the savvy connectivity to give you a mouse that doesn’t compromise in any area. This truly great mouse isn’t compatible with the Powerplay pad and could be considered quite boring but it ticks all the performance boxes and at under £50/$50 it has to be worth a look.

The G603, a right-handed all-round performing gaming mouse that comes with high-end specs and won’t break the bank! 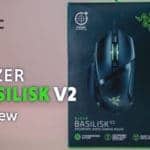 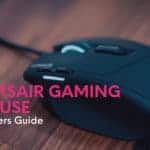