When it comes to enthusiast-level mechanical keyboards, Varmilo’s long list of products often springs to mind. I have had the pleasure of reviewing one of their collaborations with Ducky in the past – the Miya Pro Sakura and I wasn’t disappointed. There were certain aspects to the Miya Pro Sakura that I felt could have been much better but the overall design looked fantastic, making it one of my favorite 60% keyboards. Today we are looking at something that could be considered more of an artistic masterpiece than a keyboard – the Varmilo MA87M Beijing Opera.

For those that are unaware, Varmilo is a Chinese-based company that has been slowly but surely been introducing exquisitely themed keyboards for a few years now. Varmilo keyboards often feature unique keycap designs but the MA87M Beijing Opera has something new lurking beneath – the brand’s new EC (electrostatic capacitive) V2 switches. The jaw-dropping theme on this keyboard was released to celebrate the history of the Beijing Opera and Hanfu culture and comes available in 110%, 65%, and the TKL model we have here – 80%. 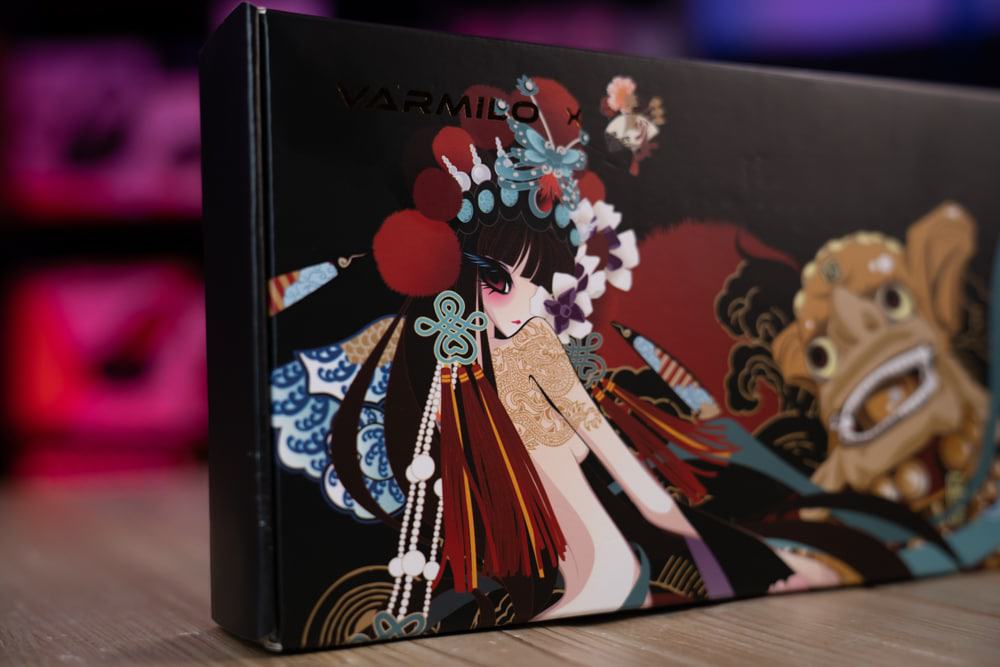 20mm (at thickest part without keycaps)

Unique design is like nothing we have ever seen

Smooth, satisfying switches that make gaming and typing a dream

Normally there is very little to say about the packaging and contents but that isn’t the case this time, look at it! The box is a work of art in its self and brought a bit of excitement when it came to unboxing the keyboard. The whole product oozes class and the artwork is brilliant.

The design of the Beijing Opera keyboard is as unique as it is beautiful and follows on from the incredible packaging and also features on a desk pad too. As mentioned, this is available in three different sizes, all of which ooze class and could potentially leave you feeling a bit guilty about using this daily. 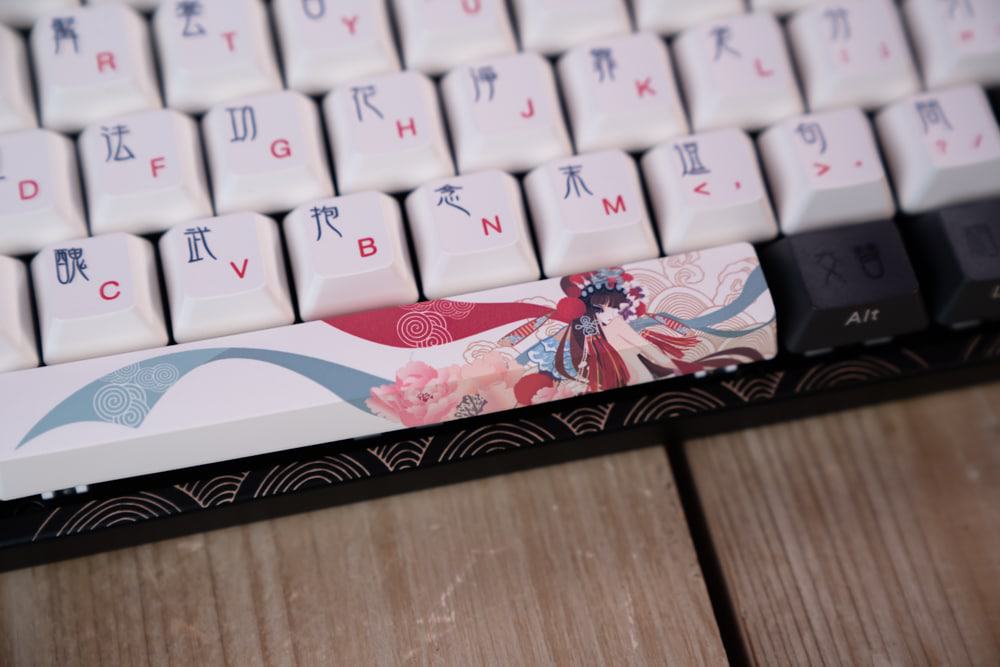 The overall color scheme of this keyboard is remarkable and it feels as though there was plenty of time dedicated to creating this piece of art. The PBT keycap design features both English and an ancient Chinese script known as “ Bronze Script”. I learned through Varmilo themselves that this script was once used before paper was invented, often being engraved on metal. I’m no culture or history buff, especially when it comes to the east but Varmilo chose these characters deliberately to fall in line with the Beijing Opera theme, for example, the character “Dan”, which translates to actress, represents the letter D.

I could talk about the keycap design alone for a very long time, the thought that has gone into this keyboard is phenomenal. I would have preferred to find some information on the design included with the keyboard rather than having to research it as it is actually quite interesting when you start deciphering what each character means. The F-keys are represented by the twelve music pitch sunset in Chinese music and the arrow keys “represent four auspicious beasts”. 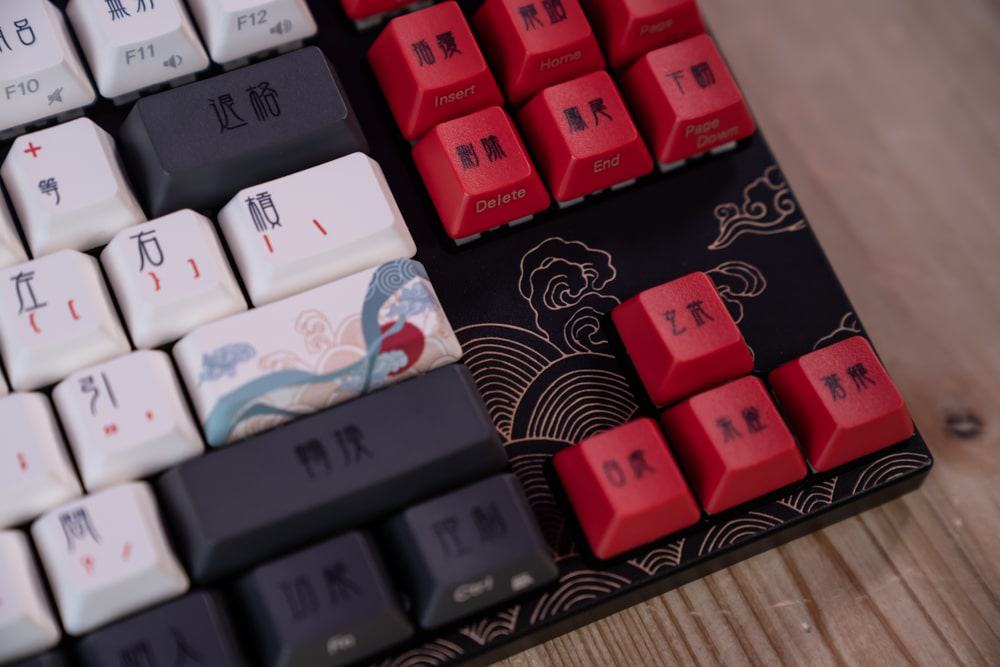 The keycaps feature an OEM profile and resemble standard mechanical keycaps aside from the aesthetics. The Esc key resembles a red rising sun and shares a standout design with the Enter and Space keys. 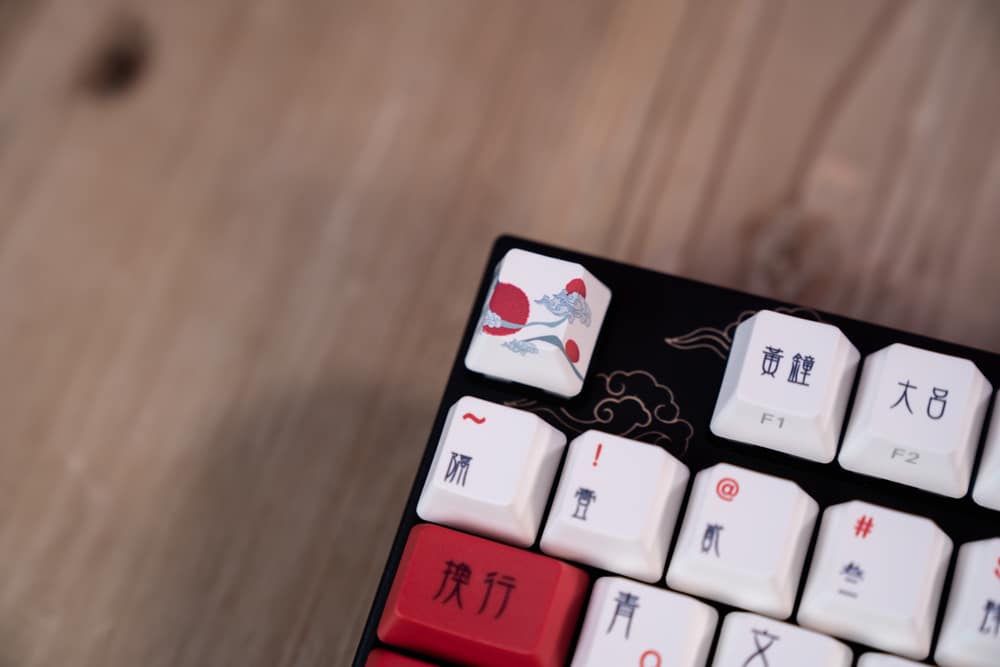 Taking a look at the back, like most modern keyboards, the Beijing Opera features a detachable cable to the rear. The base to the board features a gold embossed pattern and complements the keycap design very well, giving you a piece of art for the desktop. Unfortunately and rather strangely it is a mini-USB Type-A but this is really a non-issue. The port is recessed and the back of the keyboard features cable management routes so you can keep this looking tidy no matter where you place it within your setup. 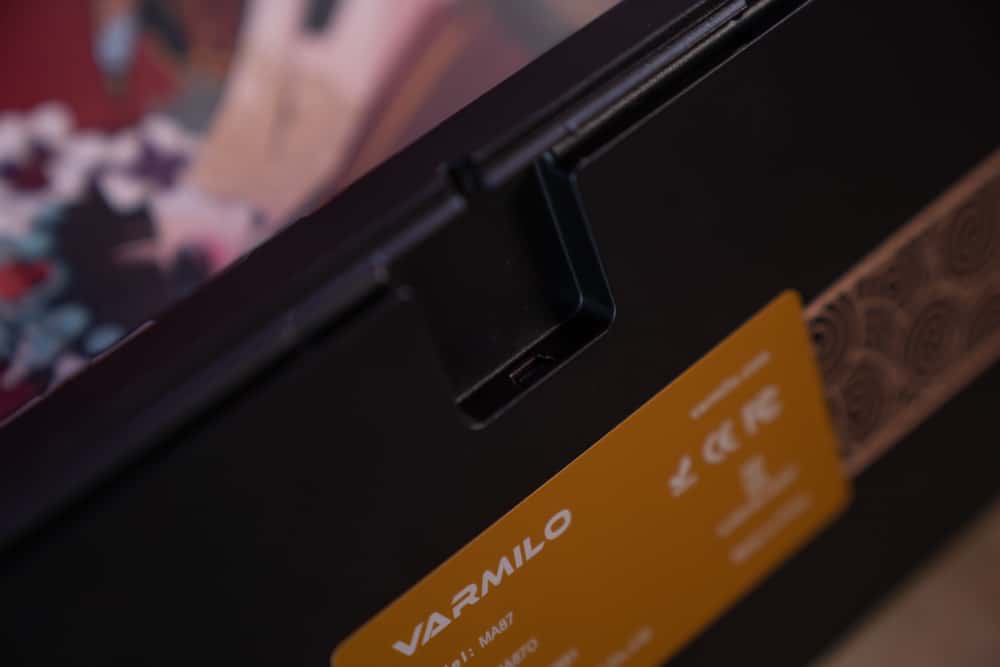 The gold-embossed pattern stretches across the entire underside of the keyboard, breaking only in the middle for the gold-colored certification plaque. For stabilization, the board has rubber feet in each corner and as it has a slightly natural ergonomic rise towards the back we see just one stage of flip-out feet, which also benefit from rubber bases. 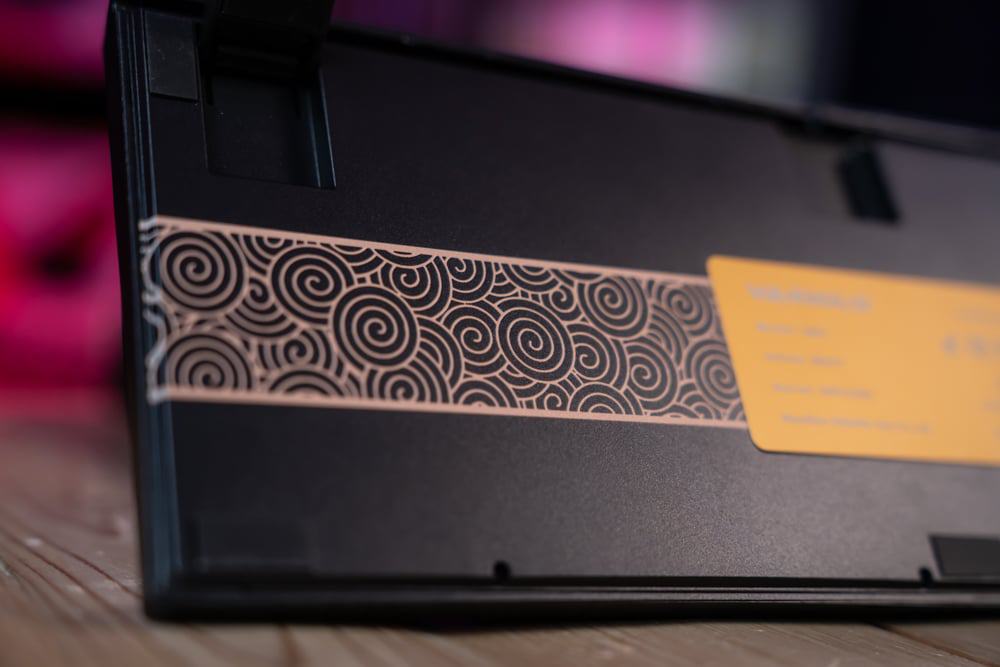 As far as I’m aware there is no dedicated software driver, with the functionality all existing on the hardware itself. The MA87M supports N-Key rollover USB and there is no chatter whatsoever, both of which we come to expect from most mechanical keyboards. If you are on the market for a board that comes with a huge list of features then maybe this type of keyboard isn’t for you, the Beijing Opera is all about design, high-end performance, and quality craftsmanship.

Aesthetics aside, the switches are the biggest feature of the MA87M keyboard. I have used a wide variety of switches since I began testing keyboards and I personally settled on Cherry MX Red, often favoring linear style over tactile, for both gaming and typing. 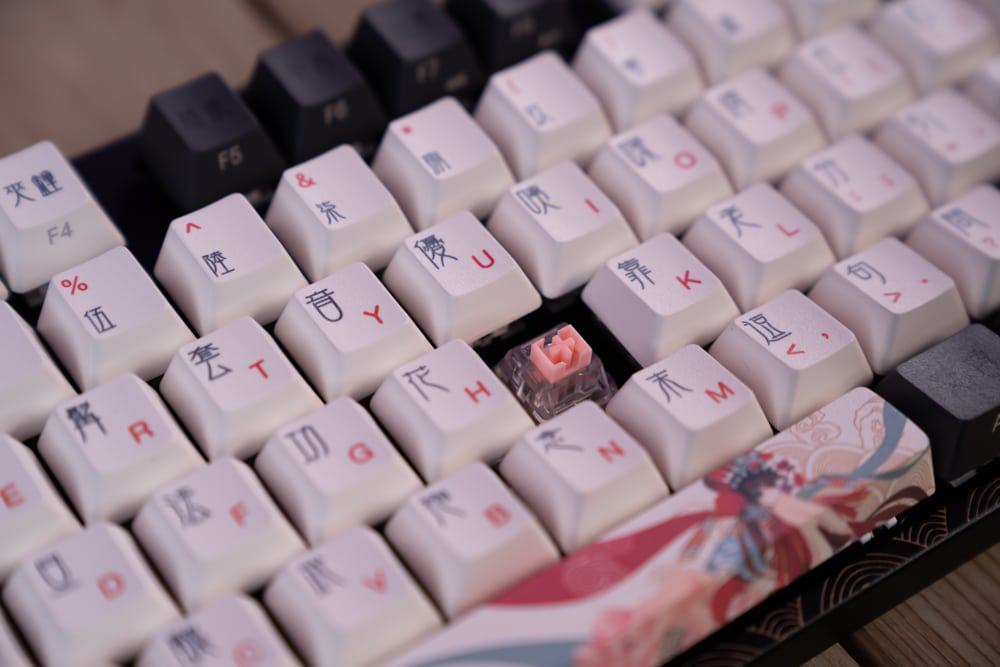 When buying this board in particular you get three switch options. The three switches in question are Varmilo’s new EC V2 switches, available in Rose, Sakura, and Daisy. All three are linear style switches, with different operating forces ranging from the Rose at 55gf which is similar to Cherry MX Black, to the Daisy at 35gf. The model we are reviewing today features the Sakura switch with an actuation force of 45gf, making it feel almost identical to Cherry MX Red. 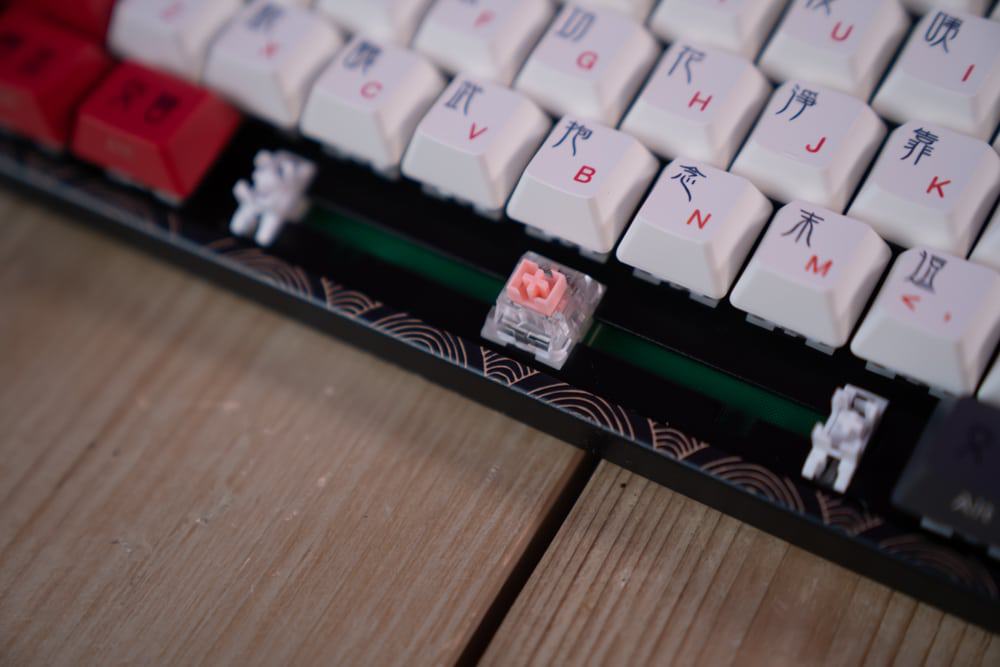 While these feel comparable to the Cherry MX Red, they are much smoother and generally much more satisfying to the touch and acoustically. These are my new favorite switches but, as they are different, let’s take a look at what is going on. These switches rely on a contact-less electrostatic capacitance generated by an electric field induction. Basically, this means these are going to last a lot longer than your standard physical contact switches, in theory at least. 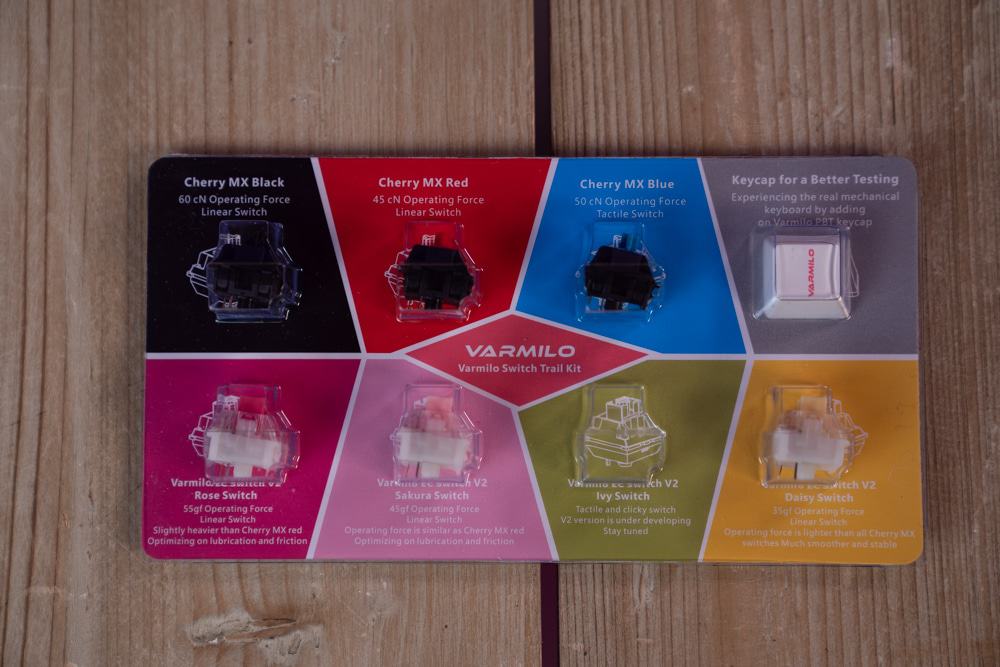 With the included switch testing kit, we see a fourth switch in the making that will be comparable to Cherry MX Blue. Varmilo calls their tactile switch “Ivy” but this is under development at the moment.

When I first took this out and plugged it in, I thought there was no backlighting at all. I’m used to this automatically coming on when they power up. After a quick look at the switches beneath the keycaps I could see there was some form of lighting so proceeded to mess around with the Fn key and arrow keys.

The backlight is just in white, yea sorry no RGB. I’m not sorry really, this board wouldn’t look right with RGB, I feel the rainbow effects that dazzle us with other boards would clash with the design, whereas the white backlight compliments it well and even highlights it as the natural light slowly goes away in the evening.

To turn on the backlight I pressed Fn + the up arrow. You can toggle between a static light and breathing effect by pressing the Fn key + the right arrow. You can change the brightness or the speed of the breathing effect (there are four levels) by pressing Fn + up and down arrows after switched on.  To switch the lighting on or off altogether, you simply press Fn + X.

It has been a real pleasure reviewing this keyboard and as someone who converted from using old office keyboards to investing a lot of money into my daily driver mechanical keyboard, this board now sits highly on my most wanted list. The only real shame here is that WePC owns this keyboard and not me! The design is truly astonishing with the only other keyboard I’d say comes close in recent years design-wise being the Year of the Dog from Ducky.

Aside from looking like artwork, the switches are fluid and make typing thoroughly enjoyable, while still giving me all the benefits for gaming I get from linear style switches. I can see Varmilos switches becoming quite popular in the future but the only point that may stop you from picking one of these up is the price. Yes, this is expensive, so expensive you may be reluctant to wear it out but trust me, it’s superb.

The Varmilo MA87M Beijing Opera keyboard is one of the best from both an aesthetics and performance standpoint. The design is truly unique and unlike anything else on the market, offering high levels of detail and a superb color scheme to match. The new switches from Varmilo are also up there with the best, feeling fluid while being acoustically superior to the competition. 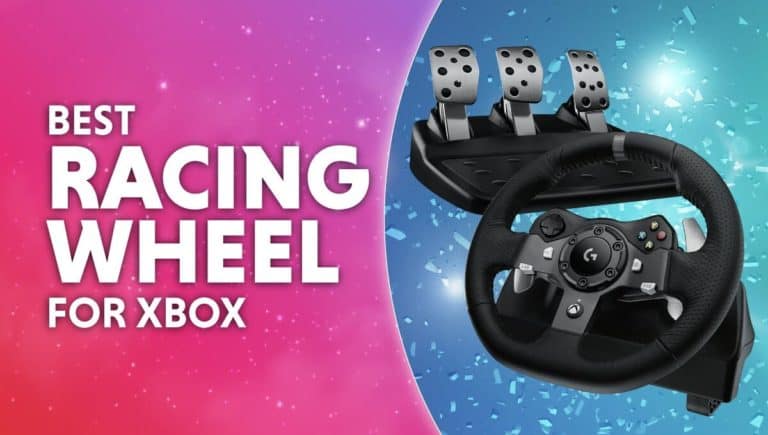 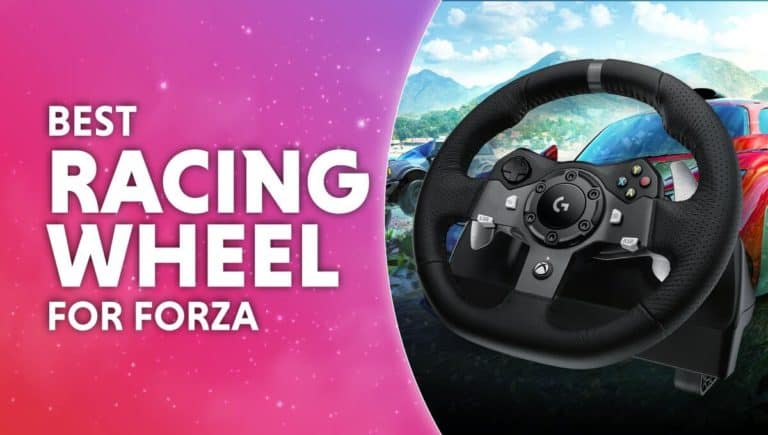 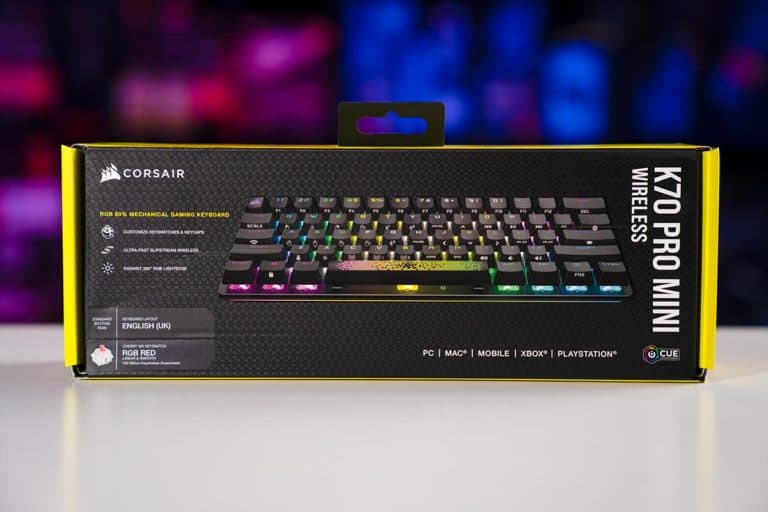 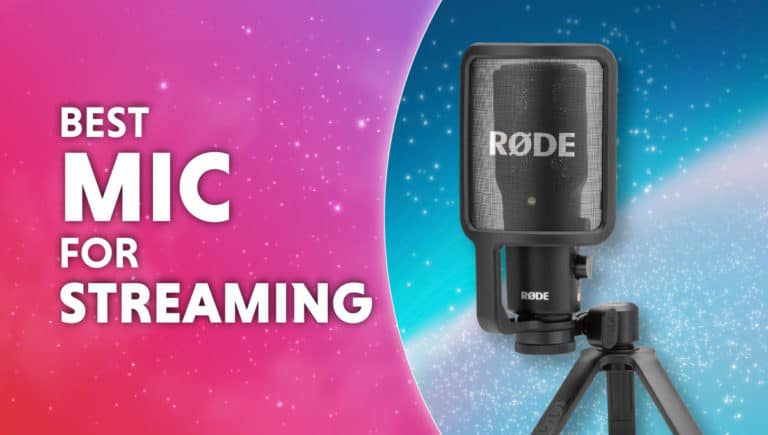