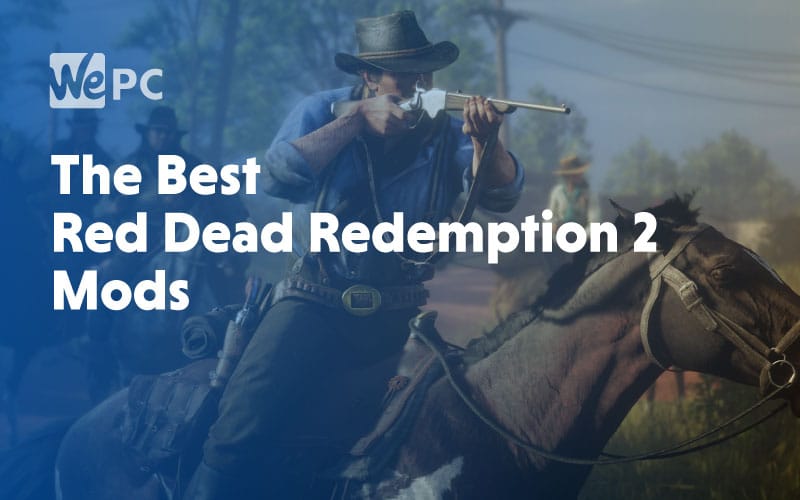 Many of us have already been getting stuck into Red Dead Redemption 2 on PC and finding out just how the epic western performs on our builds. Initially released on November 5th on PC, some users were disappointed that it wasn’t available on Steam, and that’s not to mention the copious launch issues.

We’ve split the mods up into a couple of categories to help us (and you) to distinguish their purpose. We would also like to remind you that Rockstar’s official stance states that the “Use of unofficial modifications to the game is not supported and may result in being banned from online content.” This isn’t to say you should avoid mods, though. Rockstar released a statement that alludes that it won’t take any legal action against those using single player mods.

Now, onto the fun part! We are going to start by listing some of the most popular mods when it comes to gaming; graphical mods.

There aren’t a lot of mods available just yet that can to do things such as mass retexturing or shader work. There is, however, one graphics mod for Red Dead 2 that stands out.

While “Photorealistic Reshade” is more of a graphical enhancer than a full rework, it does aim to enhance colors, shadows, and sharpness, which allows this mod to take the already impressive graphics of Red Dead Redemption II to an even higher level.

Another shader mod that we’ve enjoyed is the Beyond Ultra 3D mod. This one won’t be to everyone’s tastes, but for those who are looking for a more vibrant and stand out environment, this is definitely a graphics mod worth checking out.

A lot of people are hoping for a true Red Dead Redemption 2 survival mode, and this mod definitely brings players a step closer to that. If you’re one of the survival mode junkies looking for a more realistic and cinematic experience, this mod will allow you to quickly hide the on-screen HUD at the touch of a button.

This is great if you’re looking to grab some stunning screenshots of your new shader mods. It can also make for a more immersive roleplaying experience by ridding the screen of clutter.

This next mod will allow you to skip the intro of Red Dead 2, so you can get right into the action. Once Red Dead Redemption 2 releases on Steam, be sure to check out this mod to skip the intro and dive headfirst into your journey.

For those who have already completed the game on console, this mod will let you unlock “god mode” and have some fun.

Offering players the ability to use the coveted Red Dead Redemption 2 cheats on the fly by using their number keys, players will be able to activate cheats including infinite ammo, infinite health, infinite dead eye, no reload, infinite items, and more. This will be great fun for those of us who just want to take the game a little less seriously.

In a similar vein to the Trainer mod, the save editor mod allows players to make various edits to their in-game inventory and even their stats. This can be used in either moderation or excess depending on how far you want to take it, but if there’s something you don’t have the time to fetch, you can always just mod it in!

If you’re one of those players that simply sleep away the nights in Red Dead Redemption 2, then this mod is for you. The Longer Days mod is pretty self-explanatory, allowing you to simply modify how long the in-game day lasts. This will give you ultimate control over Arthur’s daylight hours.

If you loved the Undead Nightmare expansion for the original Red Dead Redemption, then the next mod is for you.

The Zombie and Riot Mode mod can be used to quickly change the once peaceful inhabitants around you into frenzied zombies, similar to those found in 28 Days Later.

Although there isn’t a lot of depth to this mod as of yet, it is great fun! Being cornered by townsfolk on a dark rainy night as Arthur is struggling to reload is a lot of terrifying fun, and very similar to the old days in Undead Nightmare!

Another great mod that doesn’t take a genius to work out, the 1 shot 1 kill mod turns Arthur into a gunslinging machine. With this mod active, you’ll be able to take down any of your foes with just a single shot – this counts for horses and wildlife too.

This mod is seriously impressive. It might not be the most balanced mod out there, but it sure is fun! The ThunderHawk mod changes the effect of the tomahawk weapon with a “Lightning-Infused Thunderhawk” that fries foes on impact.

When the tomahawk lands, a large thunderbolt appears from the sky, hitting the point where the tomahawk impacted, quickly blowing up those nearby, just like Mjolnir would.

Sadly, we haven’t had the chance to see a bird’s-eye view of the wonderful landscape Rockstar have crafted for us, until now.

The Red Dead redemption Hot Air Balloon mod lets you soar in the skies on a fully controllable hot air balloon. We’d recommend saving before you take flight though, falling out of the balloon mid-flight will lead to a hilarious ragdoll splat.

We’re likely to see the modding scene grow and grow once Red Dead Redemption 2 launches on Steam this month. With more players having access to the game, we should start to see some truly impressive, and often wacky mods.

If you haven’t picked up Red Dead Redemption 2 just yet, we are running a giveaway to celebrate its Steam release. Check out the following page for more details!

Let us know what your favorite mods have been so far. Have we missed an unknown gem from our list? Are you currently developing your own mod? Let us know in the comments section down below.

Got a question about Red Dead Redemption 2 you want answering? See if our community has answers!