Home Blog Tips & Tricks GPUs What is GPU Scaling? How to Turn it On or Off?

What is GPU Scaling? How to Turn it On or Off? 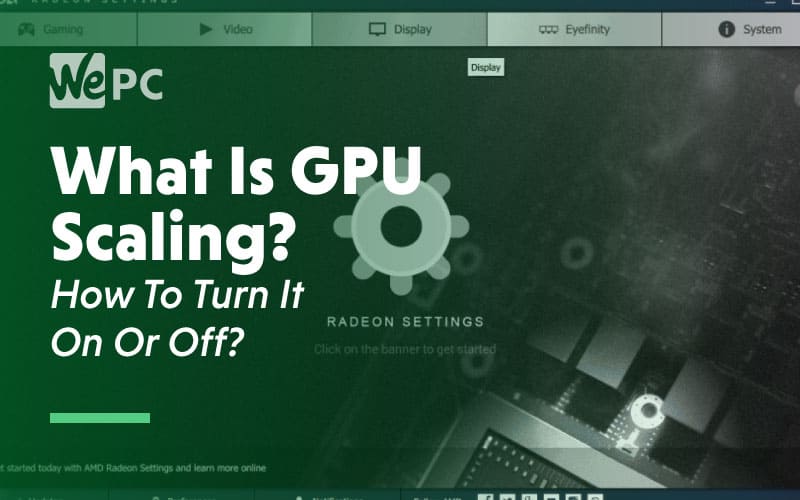 Enabling GPU scaling allows you to experience fine-tuned graphics and image output regardless the resolution. This significantly helps and improves your graphics experience.

Gamers want to experience the best graphics possible. This allows us to experience a totally different reality. With how technology advanced over the past few years, seeing blurred or stretched image output and bad image resolutions are common issues. With GPU scaling, all of these can be solved.

Before we go to the steps of how to enable GPU scaling, let’s talk about what they really are and how they help you.

GPU scaling is an option that allows you to adjust the game’s aspect ratio according to your monitor’s resolution to produce high-quality image output on-screen.

If you have an AMD graphics card, you can have the GPU scaling option adjusted via AMD Catalyst or via AMD Radeon Graphics. A detailed list of steps can be seen later.

To be able to adjust your GPU scaling, you need to have your monitor directly attached to the graphics card adapter via DVI or HDMI.

Games run on lower aspect ratios of 5:4 or 4:3 will stretch the images on a 16:9 screen setting. This produces blurred, stretched, and poor image output. AMD GPU scaling adjusts the images to produce better image quality without pixelating the images.

Other makes – aside from AMD, also offers options to adjust GPU scaling. More of the GPU scaling modes can be seen below.

Do You Need GPU Scaling?

If you are into indie or old games that run in 5:4 or 4:3 aspect ratio or applications that run in such aspect ratios, its overall graphics output will show poor or pixelated images on a 16:9 or 16:10 screen. This is where GPU scaling comes into play. They iron out the problems to make them look good on widescreen monitors and displays.

If you are to adjust your GPU scaling via AMD Catalyst or AMD Radeon Graphics, there will be 3 modes you can choose from.

Maintain Aspect Ratio allows you to experience the game in full screen without altering the aspect ratio as you scale the graphics up. The excess background will be filled with black bars or a background pattern.

Scale Image to Full Panel Size is an option where the image is stretched to fit the screen. This usually shows poor image output and bad graphics output since the game former aspect ratio is not followed.

Use Centered Trimmings turns the scaling off by placing the original screen resolution of the image in the center of the display. A background pattern or black bars are placed around the image.

Is there a Way to Remove the Black Bars?

Black bars around the image show up because there is a mismatch between scaling and the GPU process of analyzing the image.

With that in mind, we’ll now talk about the steps of how to turn the GPU scaling on or off.

Is it Best to Enable GPU Scaling?

Most of the time, GPU scaling is disabled for games that run the same resolution as the monitor’s native resolution. Enabling GPU scaling will technically induce input lag, about 1ms or lesser as the GPU needs to process the images to fit the scaling mode.

This may not have obvious effects with videos but gamers will surely find delays, about a fraction of a second response time, from the moment you clicked on the mouse or hit dash to dodge an attack.

Unless you are running a game that uses a different resolution or aspect ratio outside your monitor’s native resolution, disabling GPU scaling should be fine.