Last updated on December 5, 2019 by Will Blears 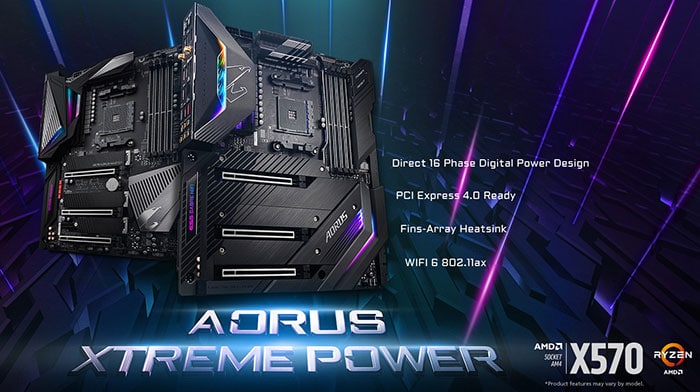 Gigabyte has joined the fray at Computex 2019 and announced no less than six new AORUS X570 motherboards placing itself as one of the first motherboard manufacturers to pop its head above the parapet with PCIe 4.0 and 3rd-Gen AMD Ryzen-ready hardware.

Sitting proudly at atop the pyramid and aimed at the high-end market is Gigabyte’s flagship AORUS Xtreme. Besides supporting the new range of Ryzen CPUs and PCIe 4.0, the board has an 8-layer low-loss PCB, direct PWM 16 phase digital VRM design, fins-array heatsink, nanocarbon baseplate for the CPU, 4 DDR4 DIMMs, and a comprehensive list of thermal solutions such as a layered heatsink, interconnected dissipation, and an all-metal design. Features don’t stop there though with triple NVMe PCIe 4.0 M.2 slots equipped with thermal guards, ESS Sabre HiFi audio, AQUANTIA 10GB Lan, WiFi 6, and Gigabyte’s RGB Fusion 2.0. 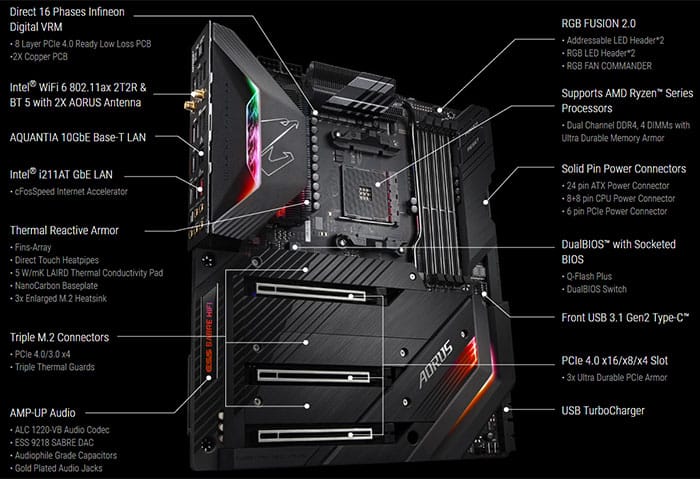 The range then trickles down to the AORUS Master, which has more or less identical specs as the Xtreme except for a downgraded direct 14 Phase Infineon digital VRM, 6-layer PCB, Realtek LAN, and a slightly different physical configuration.

Moving down a step further we have the AORUS Ultra and AORUS Pro packing many of the features of the high-end boards with a 6-layer PCB, 1G LAN, 14-phase VRM, and an IR35201 PWN. Differentiating them is WiFi 6, three M.2 slots, and an extra x4 PCIe 4.0 slot for the Ultra. These are expected to be the mid-market option.

With the AORUS Elite model, Gigabyte is catering to the budget market. The motherboard doesn’t boast many of the specs found on the higher tier models but comes in with a respectable ISL69147 PWN, a lesser 14-phase VRM, two M.2 slots, and one x16 PCIe slot, but like the Pro, no WiFi 6.

To round off the X570 range, we have the I AORUS Pro WiFi suited to the Mini-ITX format.  The model squeezes in an 8-layer PCB, 8-phase VRM, two M.2 slots, an x16 PCIe slot, and as the name implies, WiFi 6, into the small form factor.

During the Computex keynote, Gigabyte stopped short of providing a pricing structure or release date, but we imagine this will line up with the launch of the Ryzen CPUs in July.

The Best Motherboard for Ryzen 9 3950X