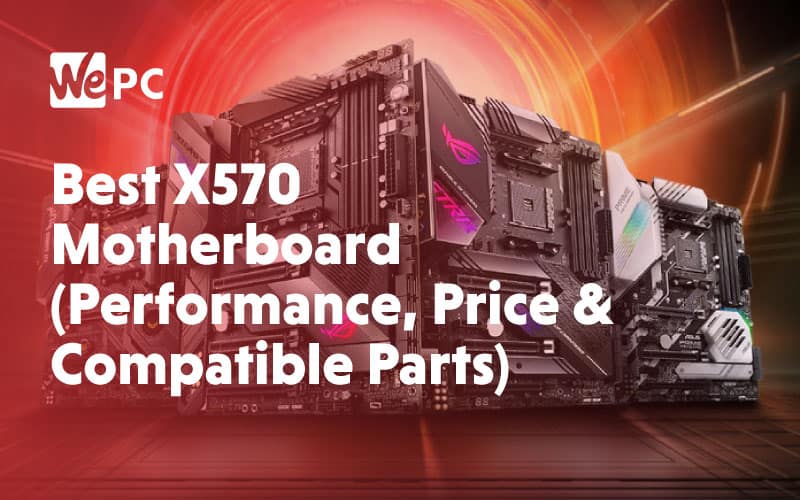 July 7th 2019 Update: Note: we have a list of ALL the X570 motherboards that have been launched today which you can check out right here.

I'm sure if you're anything like myself, you've been keeping well abreast of the latest technology announcements made over the last couple of months. If not, you've more than likely heard whispers surrounding what is likely to be AMD's take over of the CPU universe, their highly anticipated Ryzen 3000 chips that are due for release this July 7th.

It's massive news and was announced at the most recent Computex in a keynote by Dr. Su herself. It wasn't just the CPU's that were discussed however, a huge part of Computex was the announcement of the X570 motherboards which are likely to hit shelves at the same time.

Even though AMD's Ryzen 3000 chips are backward compatible with many of the older X470 motherboards, to fully utilize some of the features and benefits you're going to have to purchase one of the imminent X570 boards. With many new technologies coming to fruition, there is no better time to discuss everything the X570 has to offer and what we believe are going to be the best X570 motherboards available in the coming months.

Please note: we are compiling a worldwide list of retailers for the AMD Ryzen 3rd generation CPUs & X570 motherboards, which you can check out here.

The highly anticipated X570 marks the first consumer motherboard with PCIe 4.0 compatibility by default. Great news for consumers wanting to reap the benefits of those new high-speed M.2 devices and the latest range of Navi GPU's AMD plan to launch. The new boards will also offer native USB 3.1 Gen2 ports and a much larger overall heatsink with inbuilt fans due to the power-sapping TDP.

It's worth noting that manufacturers were planning on offering limited PCIe 4.0 support in their previous generation x470 and b450 boards, but due to complications we believe that previous Gen boards will only have the top full-length slot running PCIe 4.0 when paired with Ryzen 3000. This is mainly down to PCIe4.0 traces being much longer than the previous gen interface.

Another handy feature of the X570 boards, apart from the implementation of PCIe 4.0, is how the X570 - when paired with AMD Ryzen 3000 processors - can use its own lanes for USB 3.1 Gen2. Furthermore, the chipset can handle Wi-Fi, Bluetooth, and SATA responsibilities.

Naturally, with a new generation of a motherboard, you'd expect performance to be increased, and this is certainly the case with the x570. We can expect the following as a given:

A lot of these features will become more apparent when we get a chance to test both the X570 and AMD Ryzen 3000 chips simultaneously.

Why Get An X570 Motherboard?

So, you might be asking yourself at this stage, why would I want to buy an X570? Is it just for the new AMD chips? Well, it kind of is, and kind of isn't. Let me explain.

The main reason to go for an X570 is the new AMD 3000 chips which will be released on the 7th of July; we have a full article on Ryzen if you aren't fully up-to-speed. However, as you can see from the chart below, it's not just Ryzen 3rd Gen chips which are compatible with the new boards:

As you can see, both 2nd Gen and 2nd Gen with integrated graphics can be used with the new motherboards. Similarly, older Gen boards are compatible with the new 3rd Gen chips. Very handy for someone looking to upgrade individual parts and not their entire build. 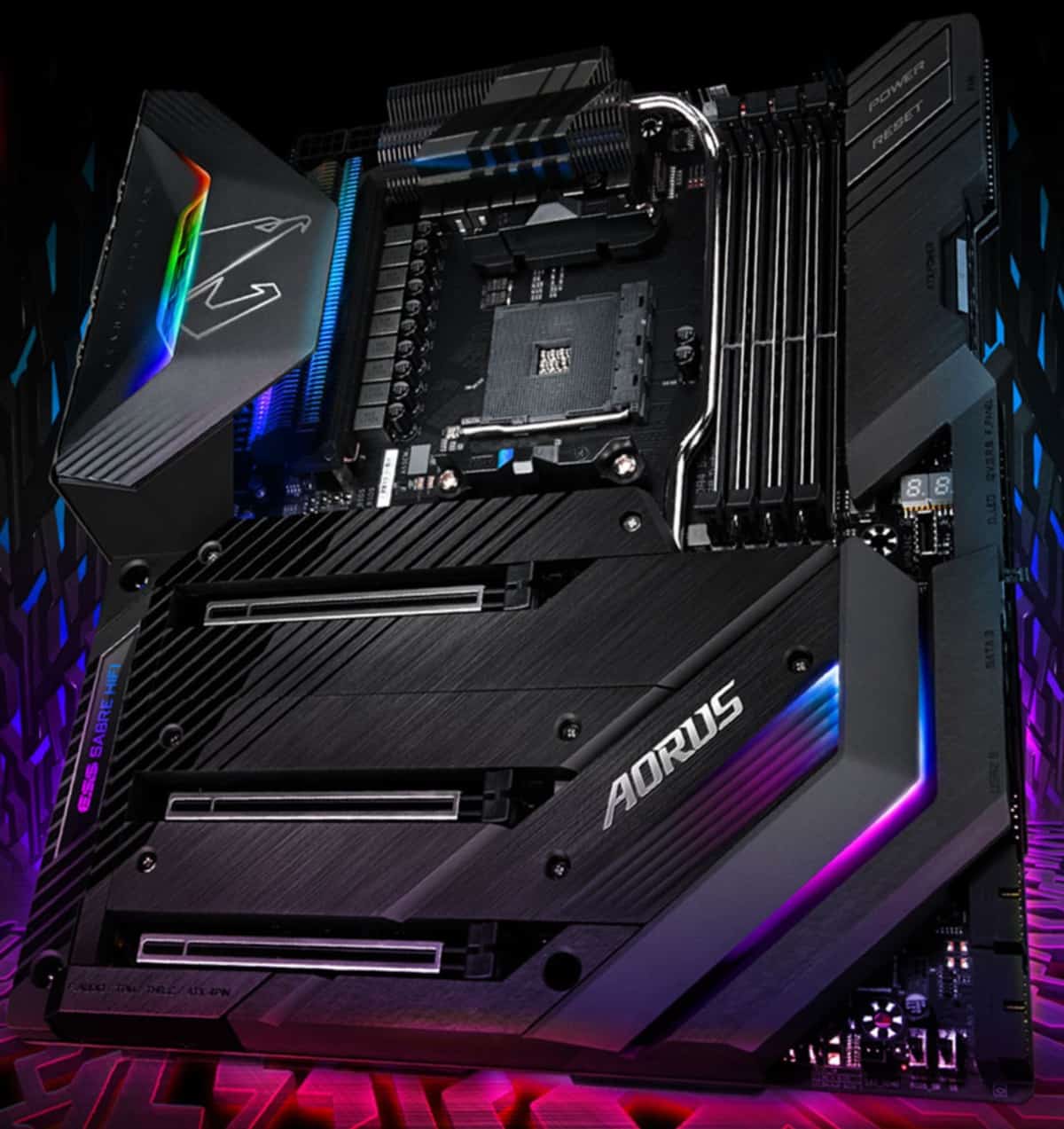 I'm sure everyone is familiar with what the Aorus Xtreme series represents, the X570 Aorus Xtreme provides everything we've come to love and more. It will be Gigabytes flagship motherboard and has ever overclocking feature you could imagine.

Gigabyte has equipped the X570 with a large 16-phase Infineon Digital VRM and an impressive heatsink to boot. A metal pipe connects the 2 VRM heatsinks which extend downwards to help cool the chipset which, if rumours are to be believed, can become quite hot.

The Aorus Xtreme comes with a high-end networking configuration which is made up of an Intel 802.11ax Wi-Fi 6 wireless chip, and a couple of ethernet controllers. One of the controllers can accommodate up to 10Gbps internet connect respectively. 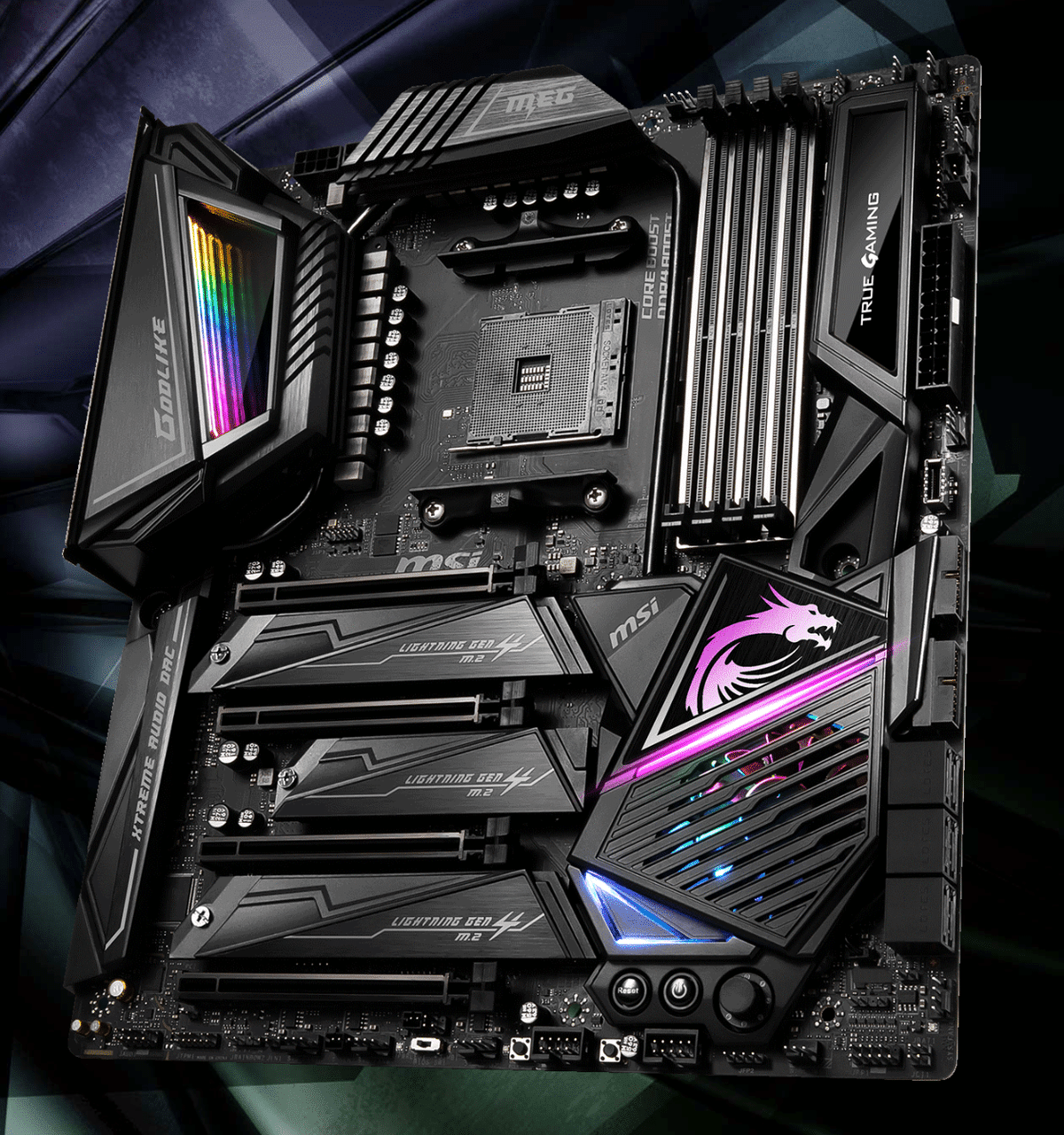 All new X570 Support PCIe 4.0 and the MSI Godlike is no different. The Godlike comes with a quality 14+4+1 digital power phase design which needs a huge thermal heatsink to keep temps down. Large heatsinks cover both VRM's and the X570 chipset in an effort to try and keep the board running at optimal levels.

The heatsink above the chipset has a built-in fan, like many of the new X570's, and is required for additional cooling which we haven't seen in older boards before. Leaving the cooling configuration aside, MSI has equipped the Godlike with plenty of additional features such as clear-CMOS, BiOS-flash buttons on the I/O panel and additional power/reset buttons near the chipset heatsink.

Some specs of the board can be found below: 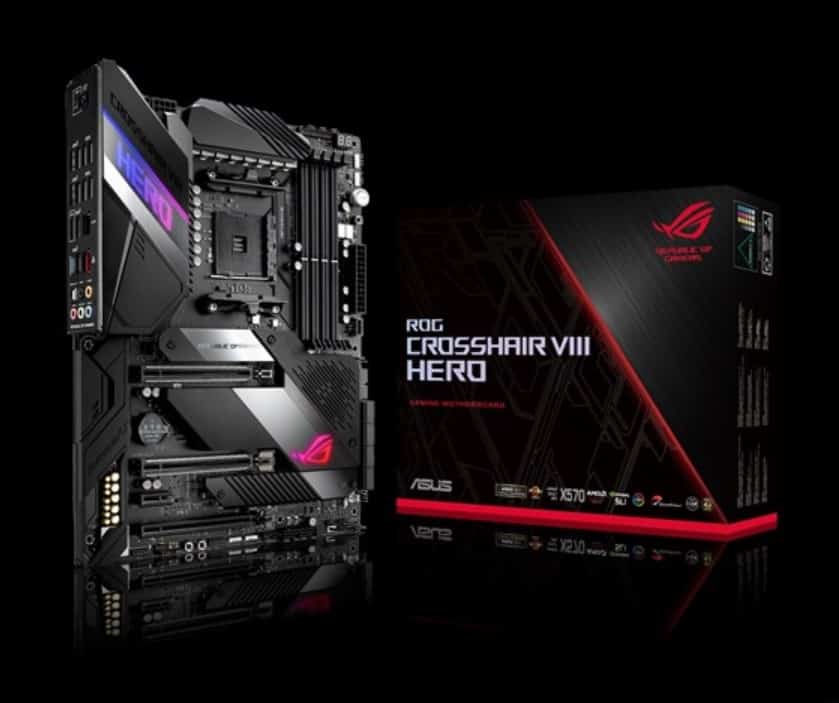 The VIII Hero is probably not the flagship X570 motherboard from ASUS; however, we feel it will probably show the greatest value for money in the high-end range. Aesthetically, like all ROG products, the VIII Hero looks gnarly and futuristic. Like most X570's, the Hero has large heatsinks and shrouds to cover most of the boards surface, again thanks to the pesky power hungry TDP.

It comes with a 16-phase power solution, identical to that of the Formula (their flagship x570), but does not support water cooling of the VRM's unfortunately. Furthermore, the Hero comes equipped with an Intel Wi-Fi 6 AX200 wireless chip for superb connectivity at all times. 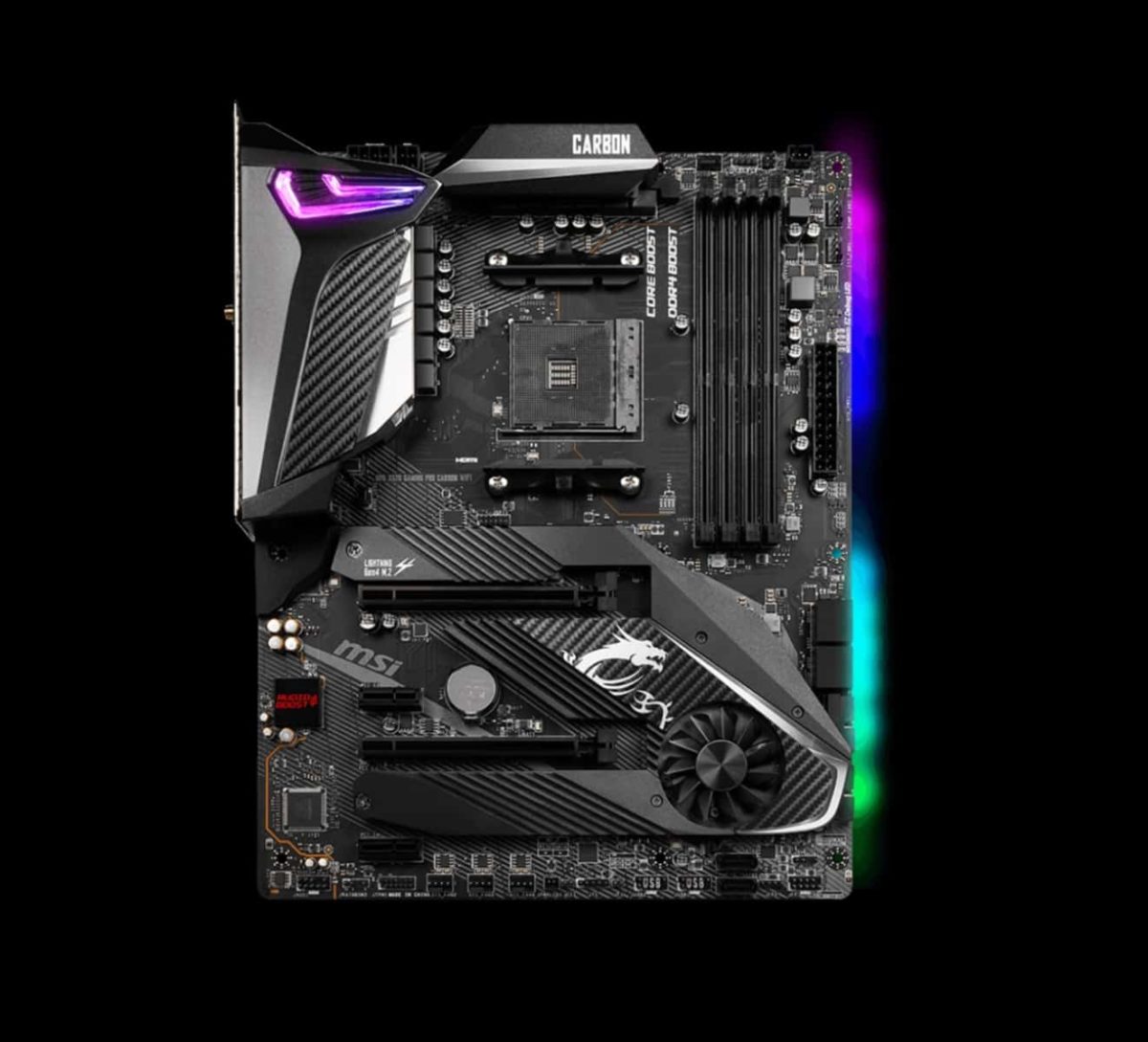 Unlike most of the other X570 that are coming to shelves, the Pro Carbon does not come equipped with a long heat pipe that connects the board's heatsinks. It has the feel of a board that is custom designed for a popular market and will probably fall 'middle of the road' in terms of pricing and performance.

The Pro Carbon comes with an 8+4 Digital power design and a clear CMOS button on its rear I/O Panel. Furthermore, the chipset fan and heatsink are quite large meaning they should provide efficient cooling at all times. Great news for those looking to overclock on a more budget-friendly board.

One of the M.2 slots on this board shares the chipsets heatsink and may be quite hard to access; however, this is yet to be determined and is only an observation. The other M.2 slot has its own heatsink so accessing that should be quite straight forward.

A great little feature for this specific Pro Carbon is the in-built HDMI port which allows users to take full advantage of the APU's AMD plan to release in the coming weeks. 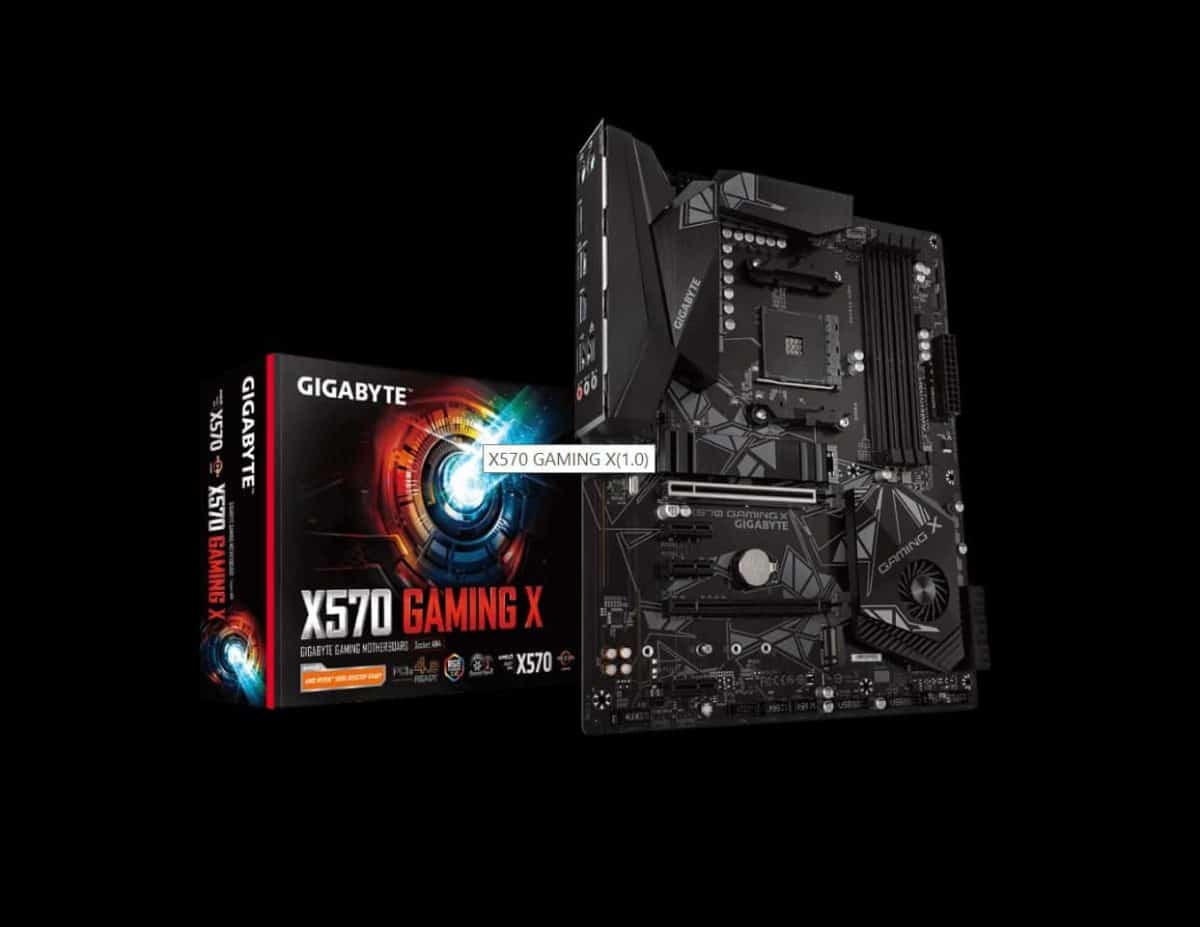 The Gaming X X570 by Gigabyte is the only board that doesn't come draped with the Aorus branding, which probably tells you a lot about what this motherboard has to offer. It looks like it's set to target the lower-end region of the consumer market, not surprising, considering the name.

This being said, it does come with a 12-phase power design and heatsinks similar in size to that of the AORUS Master. Pair this with the impressive heatsinks, and you can tell the overclocking potential will be very good for its price.

It comes equipped with 2 x M.2 slots, but only one has the assistance of a heatsink. Some of the other features which come with this board are relatively basic at best and include a Realtek-backed gigabit Ethernet port and Realtek's ALC887 audio codec.

And there you have it, the best X570 motherboards due for release this summer (or so we think based on leaked specs and projected pricing). The real exciting thing about these new motherboards, whichever one you decide to buy, is their ability to house both the new AMD Ryzen 3000 chips and the super fast PCIe 4.0 slots as well. It's going to be a real joy to test the new equipment later this year and see what true potential AMD has mustered up from, seemingly, nowhere!

Leave us a comment letting the team know which X570 motherboard you decided to go for and why!