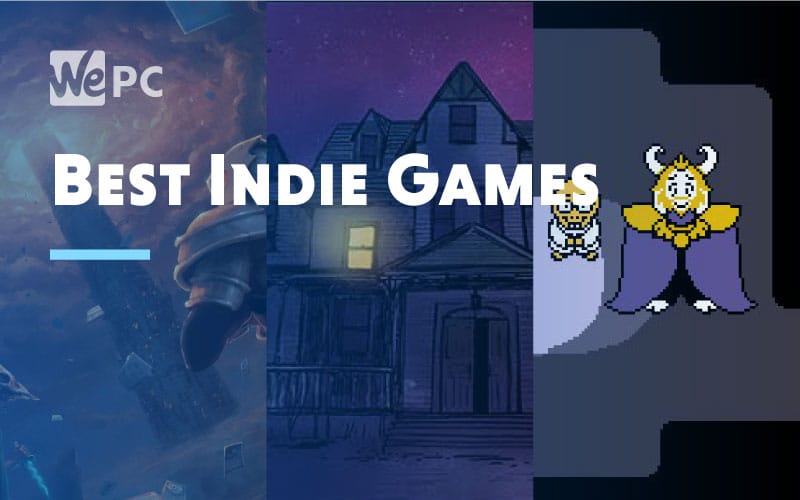 If you like supporting small developers, there are some great indie games out there for you to check out. Better yet, these are usually nowhere near the price of typical AAA titles. Often retailing in the region of £10 – £20, these are a great bargain to check out.

One of the best selling genres in indie games is the roguelike genre. In these titles, your death often means the end of your run with no progress apart from unlocks being saved. While we’ve included a few of these on our list, we’ve made sure to hit some other genres too in case these aren’t your typical style.

1. The Binding of Isaac: Rebirth

As promised, we’re kicking this list off with a roguelike! The Binding of Isaac: Rebirth is a game where you play as a young boy, Isaac, who is forced to descend into the basement where he has to kill a variety of monsters in order to survive.

With hundreds of unique items on offer here, each run that you go on will be completely different. While a difficult game at first, the more runs you play though the better you will become. In no time, you’ll have memorized enemy patterns, the strongest items and interesting synergies that will help you achieve consistent success.

There are a number of characters you can experience each run with, all with interesting biblical-style connections. You’ll be able to unlock additional characters and even alternate paths to victory if you are successful enough.

Next on our list is another roguelike that mixes in a bit of deck-building to keep things fresh. Taking place over the course of three separate acts, you’ll have to ascend the Spire, collecting cards, relics and potions that will help increase your chance of survival. However, falling to one of the many enemies will result in you having to start your climb all over again.

With four different heroes to choose from, each with their own list of cards and special relics, every run can feel completely different while still posing a challenge. At the end of each floor, you will also have to defeat a boss in order to proceed to the next floor. Learning which cards and relics have synergies is crucial if you want to succeed in your quest to Slay the Spire.

If you’re looking for a more relaxing, story-driven way to enjoy indie games, Gone Home is an excellent little title. While being a bit on the shorter side of what you’d usually see in a game, this title focuses on the struggles of family life rather than heart-pumping action.

Upon returning home from an extended overseas visit, you find your home completely abandoned with no sign of your welcoming family. You’ll spend your time wandering through your house, inspecting clues for some insight into what has happened.

Without spoiling too much, what you end up with is a heartwarming, emotional story that will leave you wanting more.

This cartoony, rocket-launching game may look simplistic at first, but if you look past the aesthetics you’ll find a deep simulation of rocket science and its physics. In the standard sandbox mode, you have no real objective other than to explore. You can achieve this by building whatever style of rocket or spaceplane takes your fancy to launch your Kerbins out of the, well… Kerbinsphere!

Simply strapping on the biggest boosters won’t suffice though, if you want to go far, you’ll have to take a leaf out of NASA’s book to achieve a stable orbit every time. Adding stages to your rocket, solar panels for your electrics and parachutes for your safe return will help propel you further and further every time.

There are a number of planets to explore in the system, each with different orbits, atmospheres, and levels of gravity. You’ll have to become a pretty shrewd rocket-builder if you wish to visit them all.

The final title on our list has become a bit of a cult classic since its release back in 2015. Undertale has a very charming story and pixel art graphic that really sets it apart from other titles. With each decision you make having a huge effect on the end of the game, you’ll have to think carefully before you act.

You can even choose to face the game as a total pacifist if you want an extra challenge. All of the enemies you come up against are intricately crafted and beautifully designed. On top of this, the bosses you face in certain areas are quite intimidating and the action is intense when you first meet them.

We hope this list has opened up your eyes to the sheer value of fun that can be found from independent game studios. Indie games are no longer under-budgeted, unfinished games, any of these picks above will easily keep you occupied for an entire weekend and none feel unfinished.

While we could have easily written 3,000 words on the greatest indie games, we’ve tried to keep this list short and sweet. Have we missed any of your favorites from this list? Let us know what you’d have included down in the comments section below. We love hearing your thoughts.