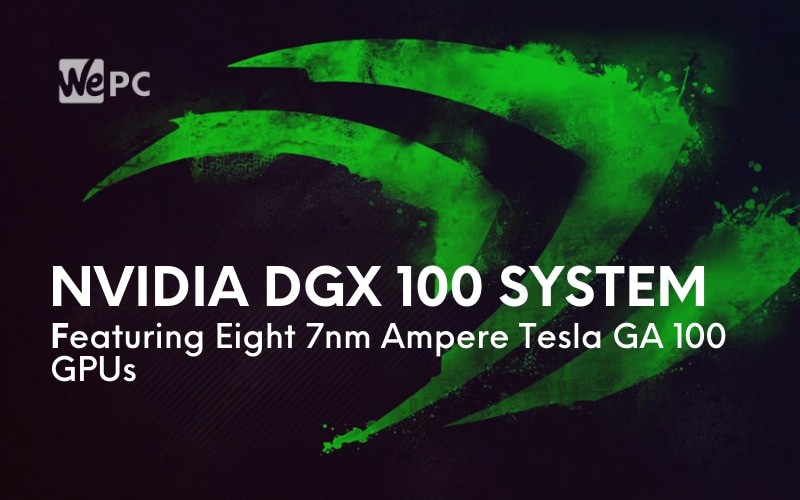 A few hours out from NVIDIA GTC keynote, details about what the GPU giant plans to unveil have surfaced, and they are nothing short of impressive. These come courtesy of a since-deleted article over at EETimes, with the outlet seemingly letting the cat out of the bag a little earlier than planned. This being the internet, they’ve already started to circulate.

NVIDIA plans to showcase an Ampere-based GPU, dubbed the Tesla A100, alongside a system housing multiple iterations of the GPU, known as the NVIDIA DGX A100.

It includes 54 billion transistors and third-gen Tesla cores, which equates to more than double that of the 21 billion found in the Volta GV 100, and with that should come a performance boost of x20 over the same Volta GPU when it comes to single-precision AI (32-bit floating-point numbers) and AI inference (8-bit integer numbers).

The GPU should also offer a 2.5 boost when it comes to high-performance scientific computing (double-precision, 64-bit numbers) and over one Peta-operations per second.

Moving to the DGX A100, the system features no less than eight of these Tesla GA100s, with five petaflops of performance. NVIDIA says that a single DGX rack will replace 25 data center racks, but with significant power saving with only a twentieth of the power requirement at a tenth of the cost.

The system can handle data analytics and scale-out applications moving away from the AI-operations focus of previous generations.

NVIDIA says the DGX A100 is already operational in the US Department of Energy’s Aragone national lab, where it is helping research on the coronavirus.

Pricing starts at a staggering $200,000, and the DGX A100 is up and ready for sale with models already on their way to customers.