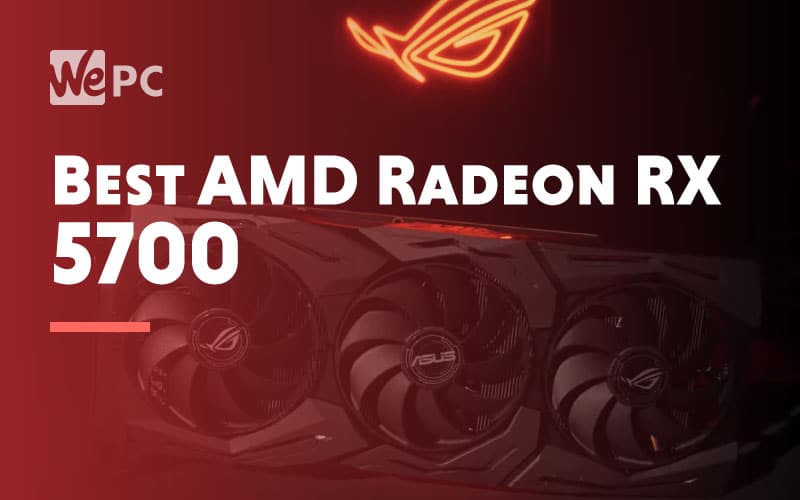 For those looking to break into the 1440p zone of playing games, the Radeon RX 5700 GPU is a great choice.

Choosing a graphics card is always difficult, with so many options out there claiming to be the very best that money can buy.

If you have narrowed down your search to AMD’s RX 5700 series, then we’re here to help you choose the best aftermarket model for you. In this guide, we have put together a list of the best RX 5700 graphics cards that different manufacturers have to offer.

We will also provide you with a guide of the different things to look at and consider when shopping around for a graphics card.

Your choice of graphics card is crucial to your gaming performance and overall experience. However, you will also need to choose a graphics card that complements your other PC components to ensure you get the best performance out of your build.

How We Choose The Best Graphics Cards

When you are shopping around for a new graphics card, the amount of choice and all the different aspects to consider can get a bit overwhelming. That’s why we have put together this helpful guide to help you choose. But how do we choose?

When we look at graphics cards and compare them, we try to look at each component from all angles. That’s exactly why it’s a time-consuming task and why we do the hard work for you.

It’s important to look at the product’s specifications, price, user feedback, and design; which is how we choose components to recommend.

If you don’t have the time, or you’re not very tech-savvy, these reviews of different graphics cards should help you in your search for the best graphics card.

We have tested lots of different PC components at WePC and look at a variety of angles.

We look at price and performance to ensure we’re recommending the best but not just the most expensive models, so there’s something for all budgets too.

While the Radeon RX 5700 isn’t going to be the cheapest Radeon graphics card you can buy, we will take a look at the different models on offer so you can check the prices match your budget.

As mentioned above, there are always a few different things you will need to consider when shopping around for a new graphics card. You should mostly be looking at the following four angles when it comes to graphics cards - price, performance, cooling, and size.

Starting with price, this is typically the first thing most people think about when it comes to purchasing a new graphics card. It’s a good idea to know exactly what your budget is before you start comparing graphics cards. Some will fit smaller budgets but others can be quite expensive.

Generally, the more money you have to invest in a graphics card, the better the performance will be. With the RX 5700, there will be slightly different prices depending on which manufacturer you go with. There will be links to all the models we list so you can check the current prices for yourself at the time of reading.

This is often directly tied to your budget as you’re more likely to get better performance if you go for a higher-priced graphics card.

When considering the performance, it’s a good idea to know exactly what type of games you’re looking to play on your new PC build. If you’re into first-person shooters or open-world multiplayer games, you will need a stronger performance output from your graphics card compared to someone playing mostly turn-based card games online.

If you’re looking at the RX 5700 card, you will generally be able to play most games with no issue, but different models can offer different VRAM or cooling solutions which might affect your game performance.

All PCs need a degree of cooling but if you’re going to invest in a graphics card like the RX 5700, then you will need to think carefully about the cooling solutions the card offers. This will enable you to squeeze the best performance out of the card as you can, without having to worry about overheating. This is particularly so if you choose to overclock your graphics card.

If you decide to overclock, you may need to think about alternative cooling systems on top of those offered by the card itself.

It’s important that your graphics card can comfortably fit into your PC case and alongside your other components. Make sure you always check the size of any graphics card before you buy, perhaps even before you get excited by all the overclocking potential. There’s little point investing in a large graphics card if it isn’t a practical size for your PC.

If you are going to overclock, or just want to play it safe, you will also need to take into account the cooling systems you’ll need to install too. Will there be enough space for your new graphics card and a new water cooling system?

If you are new to the world of graphics cards and are looking at building your first gaming PC, this section will help you understand some of the jargon we’ll be throwing at you.

Starting with clock speeds, this is the main thing that people look at when considering and comparing graphics cards. Clock speed is the operating speed which is expressed in cycles per second (MHz). It’s important because this is the rate the graphics card can process information, which directly correlates to your gaming PC’s overall performance.

If you are looking for increased performance, you’ll want to look into overclocking. This is the process of boosting the clock speed beyond its usual limits to squeeze as much performance and extra frames per second out of the graphics card as you can.

This can result in smoother gameplay but you will also need to keep an eye on cooling your graphics card to ensure it doesn’t overheat.

Even if you’re new to building a PC, there’s a good chance you already know what RAM is. VRAM just means Video RAM. It’s the RAM that the graphics card has onboard. Ideally, you want your graphics card to use your VRAM without having to rely too much on the CPU.

So the more VRAM your graphics card has, the better your performance will be because the graphics card isn’t slowed down from trying to access the memory it needs to function from elsewhere.

The Radeon RX 5700 has 8 GB of GDDR6 VRAM which means it should be enough to play most games.

Now that we’ve gone over how we choose graphics cards and given you a little introduction to the different terminology we will be using, it’s time to head into the list of the best RX 5700 models that are on offer. 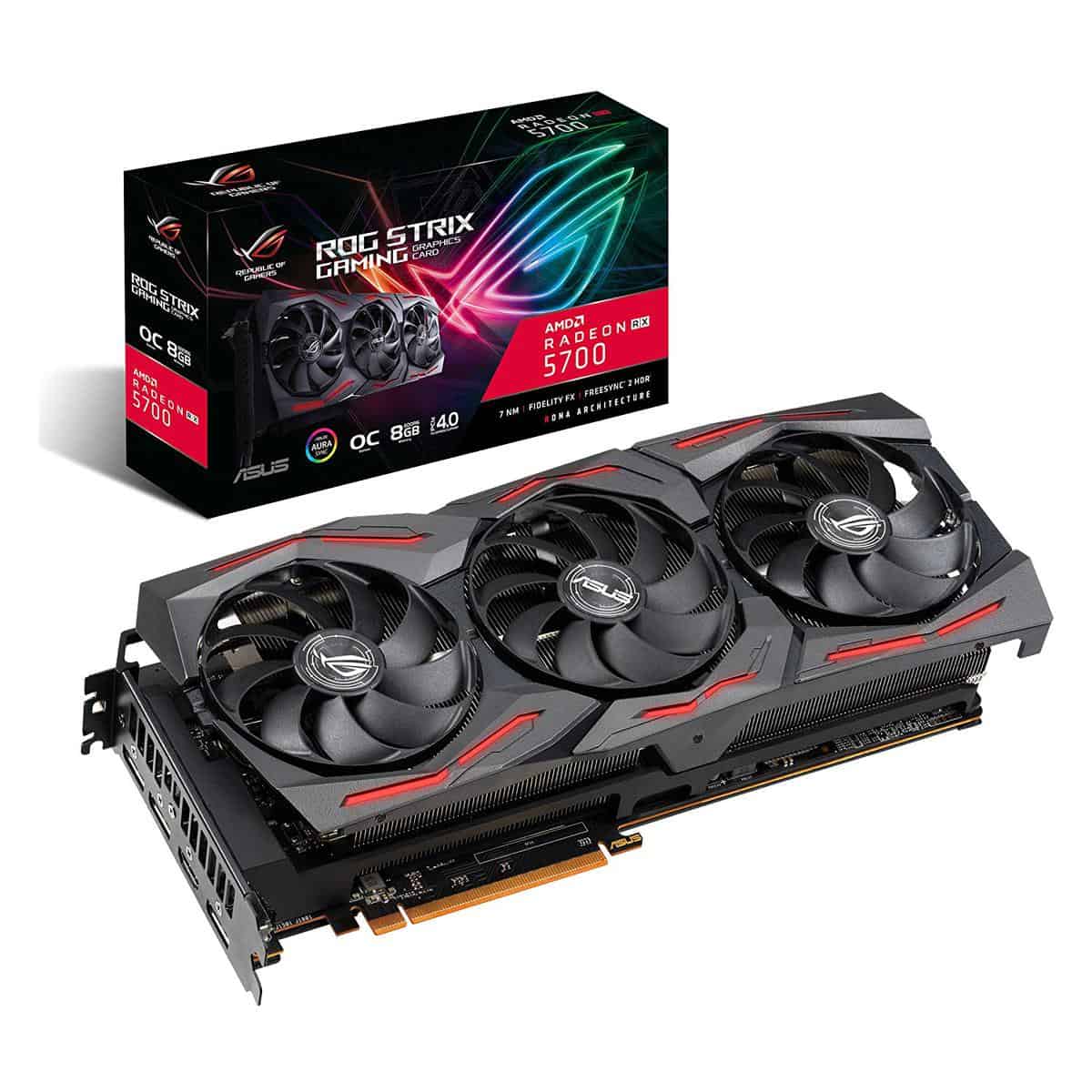 We’re starting this list with the ASUS ROG Strix model. While many of the cards on this list have the same game clock speed, the ASUS ROG model allows for up to a 1750 MHz boost clock speed. This means that it will deliver the highest level of gaming performance when compared to the other models.

With all that performance, it’s a good thing the cooling system can support it. Featuring three fans, the ASUS ROG has an axial-tech fan design and MaxContact Technology which allows for improved thermal transfer from the GPU chip. There’s also 0dB technology which keeps the noise levels from the fans to a minimum.

The graphics card is designed to be robust and withstand all your gameplay. It’s built with ASUS’ Auto-Extreme technology, Super Alloy Power II, MaxContact all tied together with a reinforced frame. Beneath the surface, this model is powered by GPU Tweak II software as well as ASUS’ XSplit, wtfast, Quantumcloud, and Radeon software. 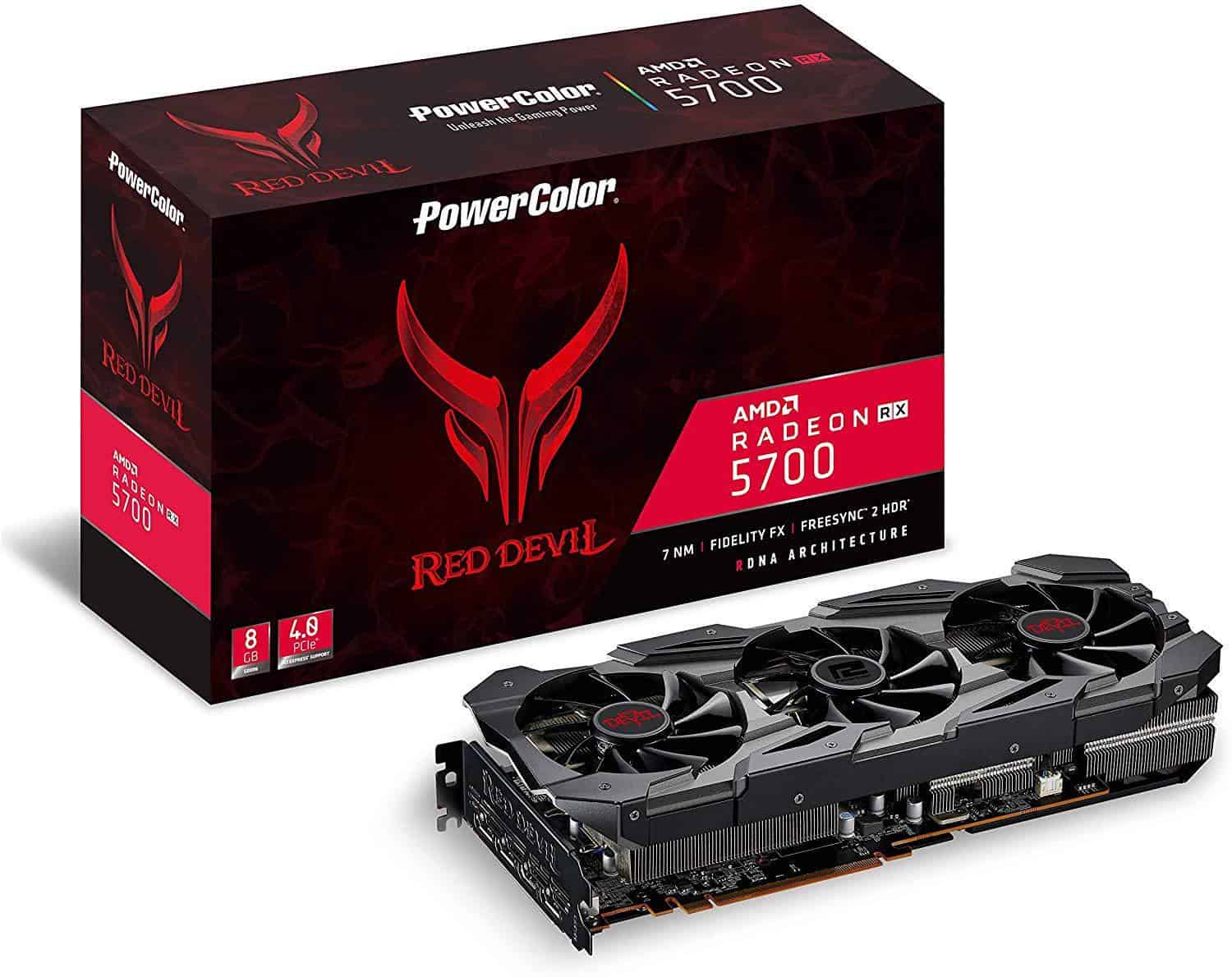 PowerColor’s Red Devil RX 5700 blends great performance with a distinctive design and branding that adds a nice touch for design-conscious shoppers. With the Red Devil logo featured on the fans and on the ports side, this is an impressive-looking graphics card. If you want customization options, you can use the RGB lighting that the Red Devil offers.

While the 1725 MHz game clock speed is impressive enough, if you’re looking to push it further, it can achieve a boost clock speed of 1750 MHz which will be great for running demanding titles at 1440p.

Supporting that power is a triple 90mm fan design with a 300mm cooler as well as a 1.5mm metal backplate to allow for better heat dissipation. This card also comes with 0dB technology to ensure things are kept as quiet as possible. 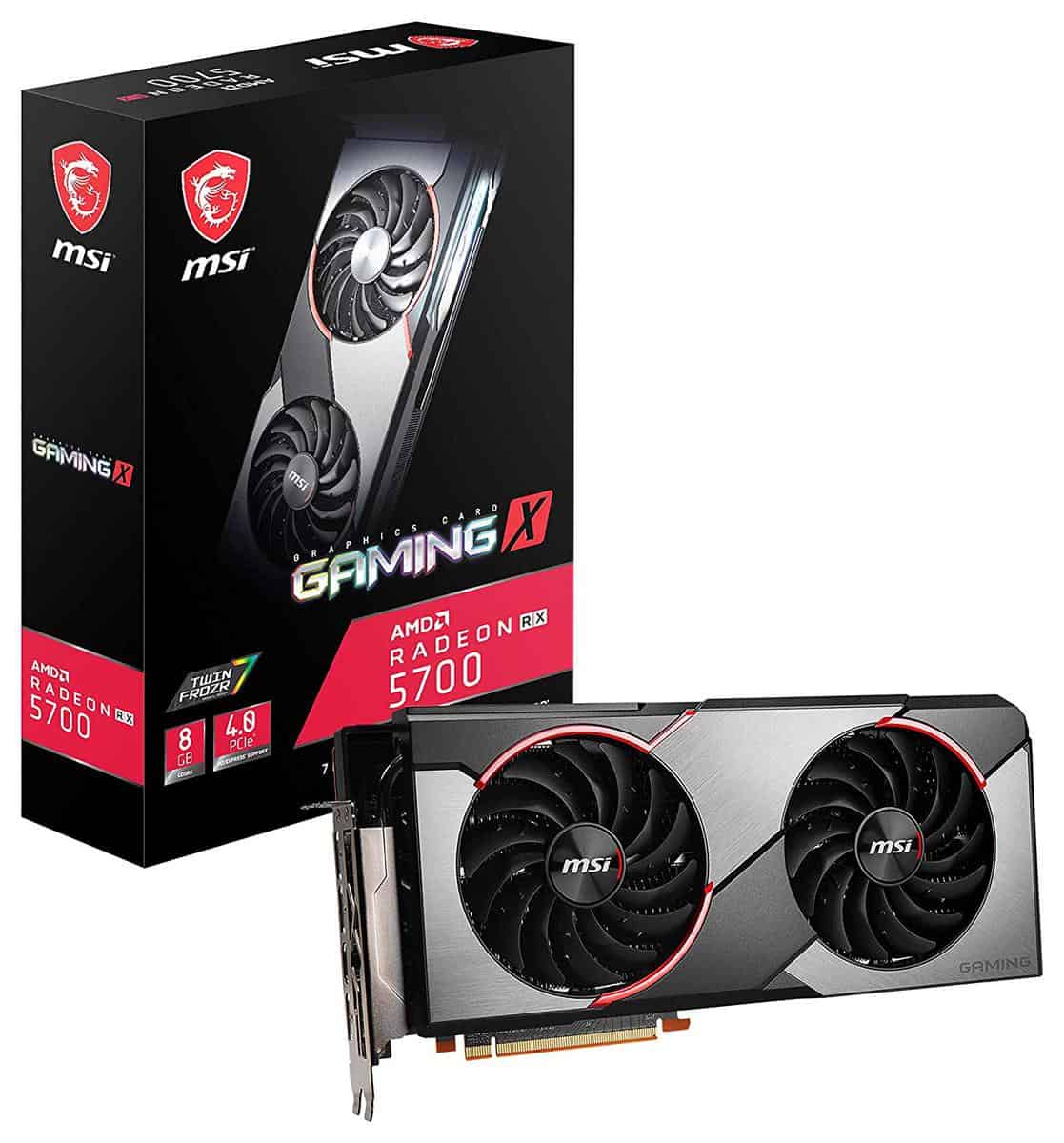 MSI’s Radeon RX 5700 Gaming X model is another impressive take on AMD’s RX 5700 graphics card. However, while this card can achieve a solid 1725 MHz in-game clock speed, the boost clock speed is only listed as up to 1725 MHz on MSI’s website.

It’s not all bad news though. There’s an Afterburner Overclocking Utility which could allow you to overclock through MSI’s specialized software.

Unlike the other models above, this entry on the list only features a dual-fan design. However, the TORX Fan 3.0 is still a solidly performing cooling system that uses a mixture of dispersion fan and traditional fan blades to boost airflow to the heat sink. Also on offer is a power-cooling plate and thermal padding which should allow your graphics card to keep as cool as possible.

In terms of visual design, with MSI’s Mystic Light feature, you can also customize the light effects if you wish to.

All the manufacturers listed above have done a solid job of delivering pretty consistent performance across the board with the RX 5700 models. There is little difference in-game clock speed and even boost clock. That makes it a difficult decision to base just on pure power and performance alone. Where they mostly differ is in design and cooling systems.

Based on these factors, we’d say it’s a tie between the ASUS ROG and the PowerColor Red Devil models. The latter certainly has the edge over the Asus model in terms of visual design if that’s a priority for you. However, the ASUS model probably wins in terms of the overall cooling system with the help of specialized software and hardware.