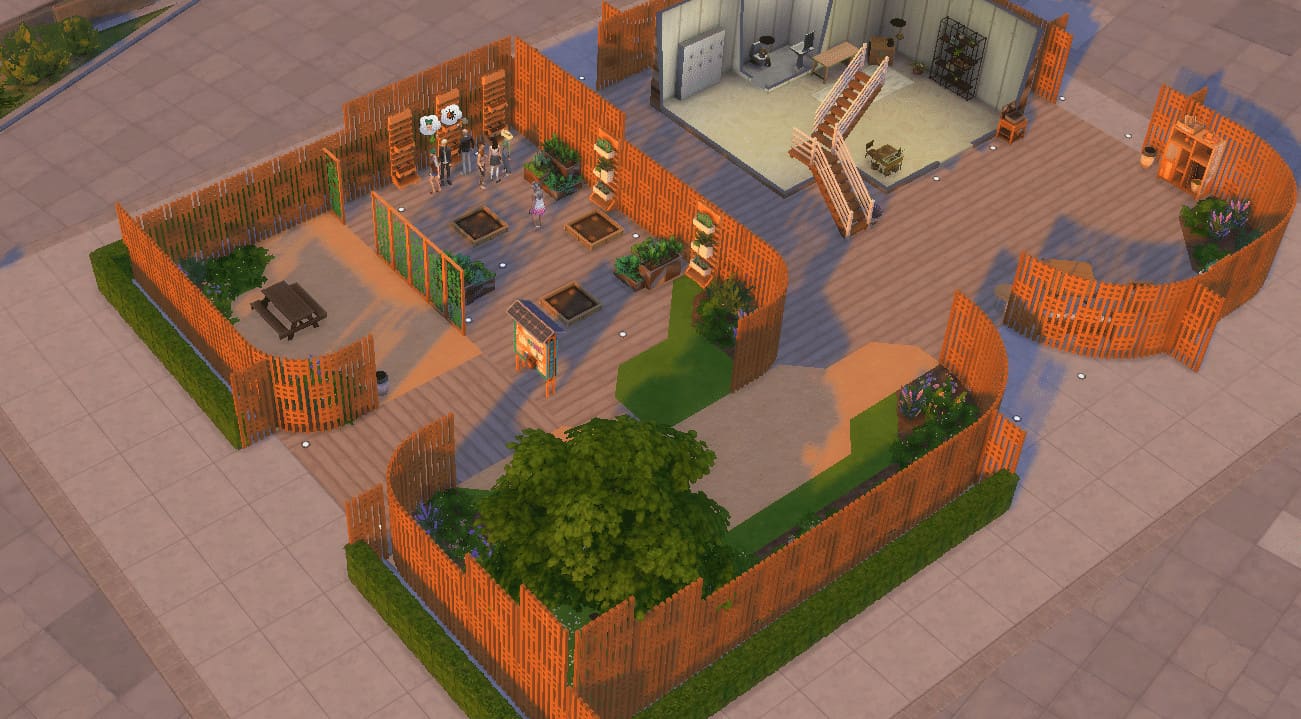 I’ve been playing The Sims since the good old days of endless life spans and sending your Sims to the Love Tub for a bit of woohoo. I’ve murdered more Sims than I care to think about and have almost definitely spent more hours designing outfits and building houses than I have actually playing the game. It’s safe to say – I’m a fan.

Whenever we get treated to a new Sims 4 expansion, I’m right there ready to dive in from minute one. And, when they announced the Eco Lifestyle expansion, this was no different. Now that I’ve had a few days to spend with the game, explore the new aspiration, content, and neighborhood – it’s time for a review.

So, what did this self-proclaimed superfan think of the latest Sims 4 expansion? Read on to find out! 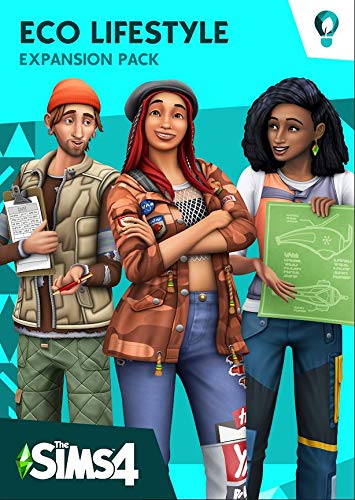 Always the first stop for a new expansion is Create A Sim. I’m a fiend for character creation and in nearly every game I play, this takes much, much longer than is normal. For my first run through, I used as much of the new content as possible (apart from some of the truly hideous clothing options). We get some very cool and hipsterish new piercings to choose from, although oddly no new tattoos, as well as some similarly hipster hairstyles. 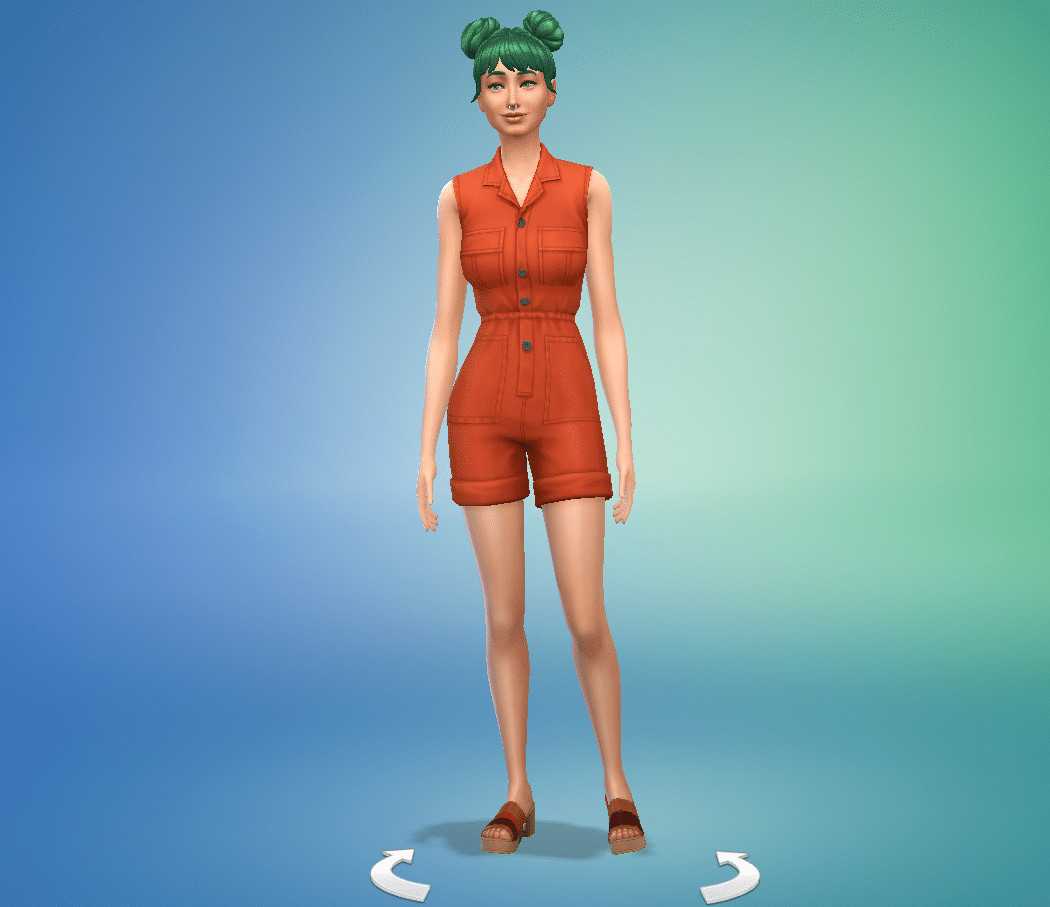 We also went ahead and chose one of the new aspirations “Eco Innovator” and packed her full of new traits to go along with it.

When you’re trying out a new game pack, this is usually the best option as it helps you get the most out of the new interactions, careers, and items. So, with our DNA decided and a randomized name assign, away we went into the new neighborhood.

Our brand-new neighborhood is Evergreen Harbor, and along with it comes new Eco footprints for every district across the game. We’ll dive more into these later, but in short, your actions will now impact the Eco Footprint of your neighborhood making it greener and healthier, or smoggy and industrial.

There are five building options right out the gate for your new Sims to move into, three houses and two apartment buildings. I remember seeing a lot of people complain that you can’t put furniture on the new balconies in the apartments, so I decided to skip the heartbreak and ent for one of the houses instead – Canal Corner. I did go back in and check out the other houses too – one of which is “Off The Grid” meaning you have to produce your own electricity and water which is a fun new addition to the game and to house design.

Now, I’ve never been one to simply move into a pre-built house and play it as is, oh no. So, now it was time to dive into the new items in Build Mode and bring out my inner Bobby from Queer Eye. Obviously, a big focus of this game is living greener, so they’ve provided us with a bunch of new items to let us do just that. For those that want to try living off the grid, or just to reduce their bills, you can now add items like solar panels, wind turbines, and dew collectors to help you source your own power. With these, you can even sell back any unused energy, so with enough, you can make money too. 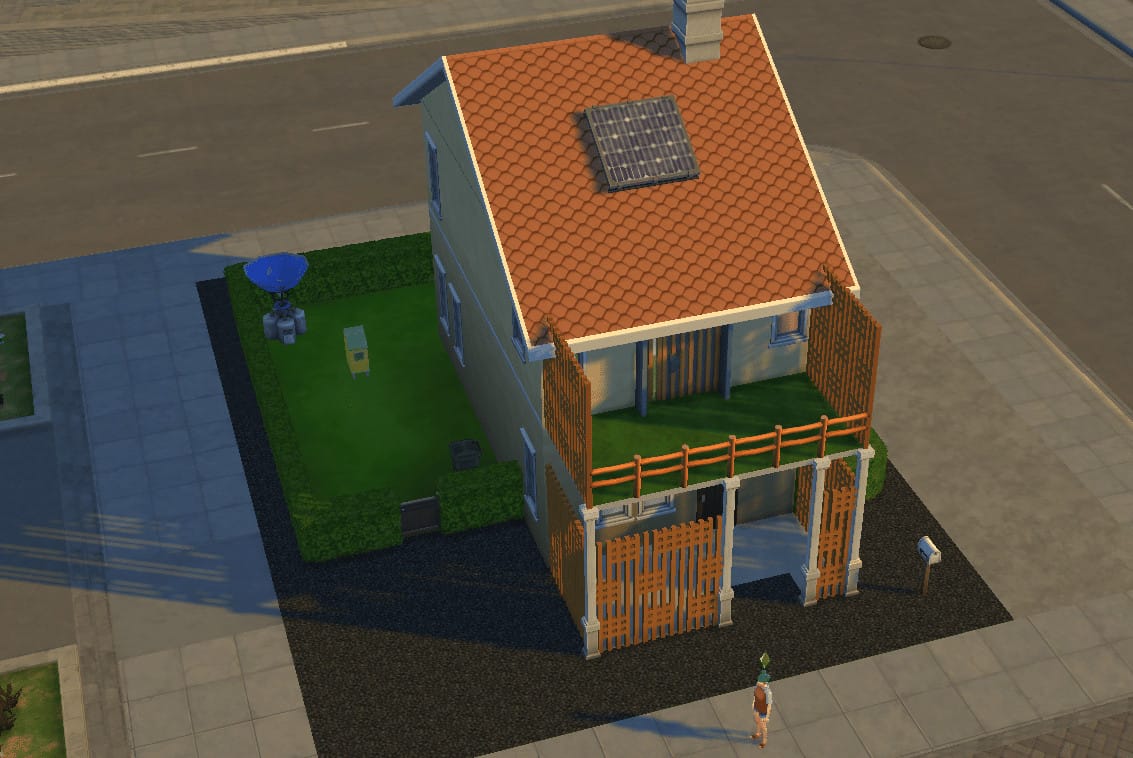 I decided to first upgrade my house with only my measly starting Simoleans, but that soon felt too restrictive when all I wanted to do was play with the new items, so a motherlode or two later, we were finally done. 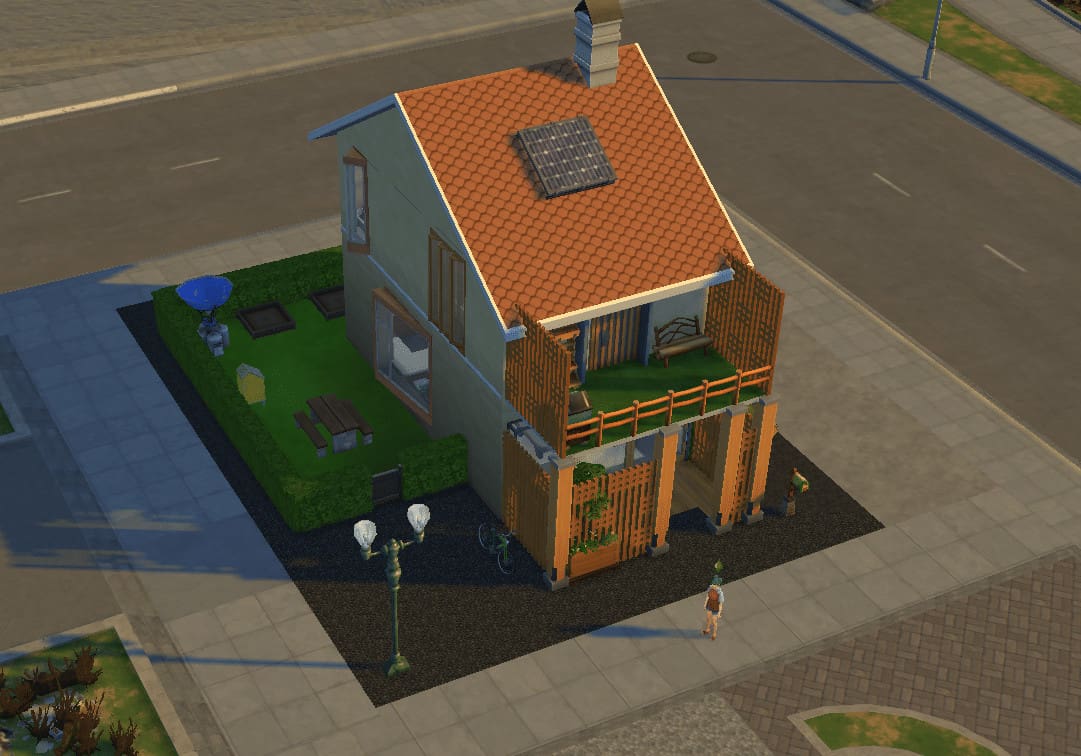 Scrolling through all the new items this pack brought with it, one thing that made no sense to me was the complete lack of new plant items. There were a handful for inside the house, but that was it. For a pack focused on being “green”, I was disappointed I didn’t get more in this area.

One new aspect of build mode as well is that certain wallpapers and floorings come with added benefits/ drawbacks. Some items will now provide you with either a “green” or “industrial” eco-footprint influence – so you’ll need to keep that in mind if you’re trying to influence your neighborhood. They also introduced two new roofing options that can help boost how much power your home can generate which was a very nice touch.

After meeting representatives for both voting green and sketchy pyramid schemes, we get to dive right into the game itself. Since my Sim (Mya) had the new Eco Innovator aspiration, we want to work towards improving our neighborhood’s eco-footprint. Most of her aspirations are centered around using new features like recycling, voting on neighborhood initiatives, reaching level 10 of the new career – Civil Designer. Fairly standard stuff that I managed to complete pretty quickly. In fact, the first part of the aspiration is to have five community influence points and vote on one neighborhood action plan – both of which you complete in the first ten minutes of gameplay. This is definitely one of the easiest aspirations they’ve introduced for The Sims 4.

The new game elements like living off the grid, saving energy, flower arranging, and cultivating bugs are all great fun but man, are they hard work! You can live entirely off your own resources now, which was interesting to try out, but they definitely make you work for it – so be prepared. 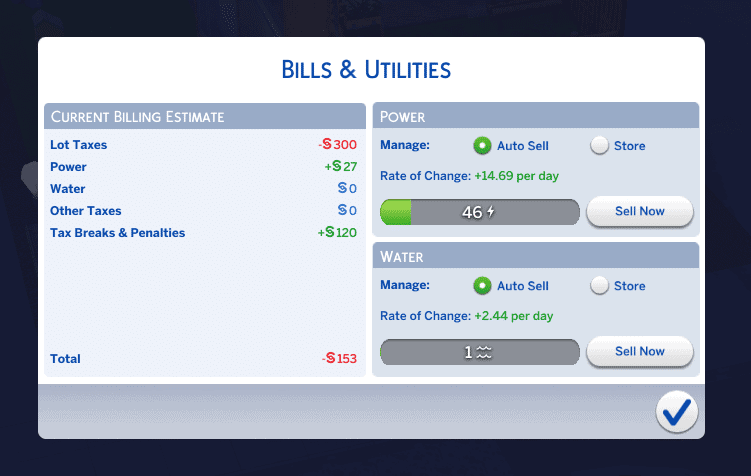 If being a Civil Designer doesn’t float your boat, then you can also choose a new branch of the Freelancer career option that focuses on all the new items you can craft. This also works nicely with the other new aspiration option “Master Maker” which focuses on the new Fabrication skill.

One of the biggest changes that Eco Lifestyle brings with it is the new Eco Footprint feature. When you complete green-focused activities (producing your own energy, gardening, recycling) the district will become greener. When you complete more energy-consuming activities (voting for industrialization efforts, using a lot of power) your footprint will slide towards “Industrial”. Eventually, if you work hard enough on your footprint to turn it nice and green, you’ll see the change in the environment around you. As the game begins, your surroundings are covered in trash and abandoned fridges. But, as you turn your neighborhood greener and greener, you get to see the are clean up its act – literally! 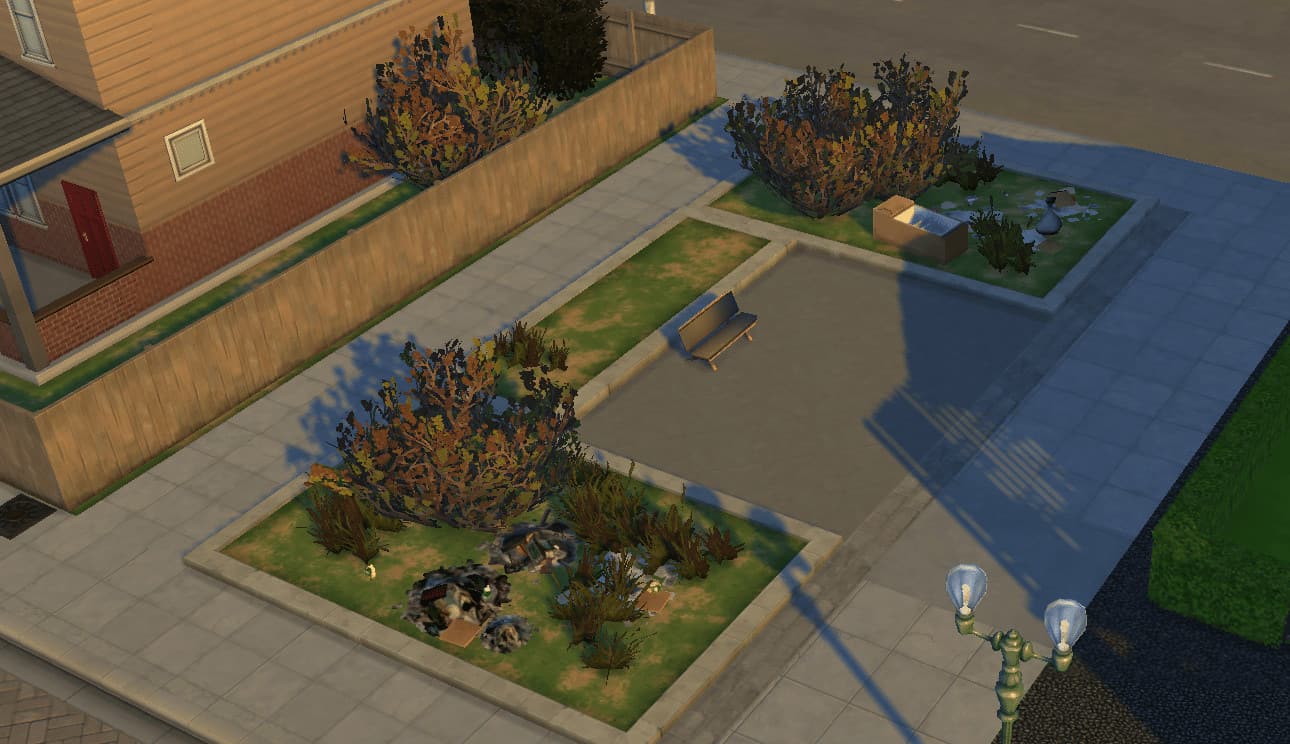 One of the easiest ways to influence these changes is by voting on Neighborhood Action Plans. To vote, you need at least 10 Influence Points which are incredibly easy to get hold of. Meeting and talking to different people in your community gets you points for one thing –  so as long as you’re keeping up your Sim’s social need, you’ll be golden.

If something ends up slipping through the net that you didn’t want to happen, you can also opt to repeal a decision from a vote – so it’s fairly easy to control what goes down in your neighborhood.

Another new feature is the addition of Community Spaces. Each area in Evergreen Harbor has one of these as you start your game, but they are all in a pretty sorry state. Once again, it’s up to you (and the community as a whole) to get in there and change things. By visiting the Community Spaces, you can use the noticeboard to vote on what kind of space you want it to be. There are three options to choose from Community Garden, Maker Space, and Marketplace. Choosing which one you want in your neighborhood will ultimately come down to the Sim you’ve built.

Of course, with three lots already in place in Evergreen Harbor, you can easily have one of each in your game if you work on it.

All in all, Eco Lifestyle is another stellar expansion pack from The Sims franchise and I’ve been really enjoying it. I have to say though – this does feel like the most work I’ve needed to put into a pack for a while. Maintaining all the new aspects as well as career, degree, or family is almost as difficult as real life. And, as much as it may surprise those that don’t play this game, I don’t want to be reminded of real life while I escape into the world of my Sims.

The Sims has always been about the odd little touches and weird moments it so effortlessly injects into its games. So, while Eco Lifestyle is interesting, beautiful, and fun it does take away a little bit of this silliness that the franchise is so loved for.