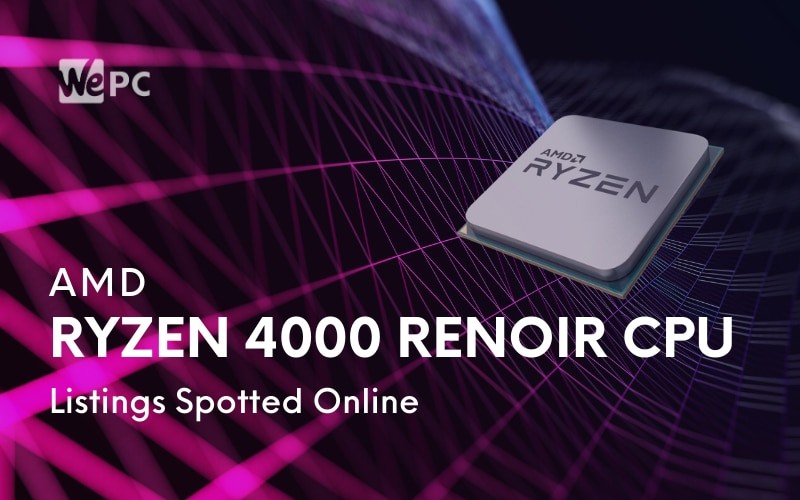 AMD Ryzen 4000 desktop CPUs have been spotted in online listings recently which could mean we may be getting closer to seeing them out in the wild.

With the release of Ryzen 4000 laptop processors getting a lot of fans excited, many of us have been equally interested to see where the desktop CPUs fall in the market.

The theory circulating is that these processors will provide more options for those shopping on a budget. It looks like users could get both 7nm Zen 2 cores and a Vega GPU in the same package which would be very welcome for those who would rather not spend upwards of $200 on a new CPU.

There’s also further speculation that these processors will be compatible with AM4 motherboards such as the B550 and A520, but as always, we’ll have to wait and see if this turns out to be true.

What Did The Benchmarks Say?

In the UserBenchmark, the AMD CPU, codenamed ‘PD340SC5M4MFH_37/34_Y’ recently appeared and gives us some clues of what to expect. The codename shows that it’s an AM4 CPU and suggests that it will have a base clock of 3.4 GHz and a boost clock speed of 3.7 GHz.

The listing shows that this is part of the Ryzen C5 series which suggests it is a 65 W model with four cores and eight threads. It also looks like it has 4 MB of L3 cache and 2 MB of L2 cache.

Overall, it looks like this listing refers to an early test sample as the clock speeds are lower than its predecessor – something which is pretty standard during any CPU test.

In the 3DMark listing, a second CPU appeared which looks like a quad-core chip with a base clock of 3.0 GHz. According to Rogame, this chip looks like it’ll feature a 35 W TDP which would put it in the Ryzen C6 series.

Rogame also tweeted that this CPU could feature higher scores than the Ryzen 7 4700U which is already an impressive eight-core, eight-thread processor with a 4.1 GHz boost clock. Whether this turns out to be accurate will be interesting to see.

The GPU in this listing also clocks at 1200 MHz and features DDR4 3200 MHz memory. There’s an indication that this is an early test too as the GPU scores lower than 6 CU Vega 7nm integrated graphics.

When Will The Ryzen 4000 Desktop Line Be Released?

It looks like the Ryzen 4000 desktop CPUs will launch in 2020 and should fall in the budget range. However, we don’t officially know how much these desktop CPUs will be listed for or when they will be available for purchase.

There’s not a whole lot of confirmation on the details out there but the rumors have been circulating for a while. If we hear any updates about 4000 CPU performance, price, or availability when they’re finally released, we will keep you updated here at WePC.