Following the big reveal in early October of the latest AMD CPU lineup, many have been left wondering about the differences between the most powerful two of the new Ryzen 5000 series: the 5950X and the 5900X. Whilst the 5900X is marketed at the familiar “best gaming CPU” niche, the 5950X represents something of a hybrid between the 3950X of the previous generation and the new 5900X with all the latest architecture.

Once the new CPU starts to appear to order, we’ll be adding links in here so you can be sure to grab one for yourself. Some retailers are already starting to list Ryzen 5000 processors on their websites, with prices and buy options beginning to appear.

Over the last couple of years AMD CPUs have been competing and occasionally overtaking Intel processors in performance for workstation usage and with this latest generation are looking to claim the coveted crown of “best gaming CPU” from their rival.

The new Zen 3 architecture of the 5000 series is claimed to offer benefits in terms of core-to-core and core-to-cache communication, as well as reductions in memory latency. Reported clock speeds are supposed to be ahead of both the previous AMD generation and Intel’s offerings. See our recent article on “AMD Ryzen 5000 Zen 3 Vs Intel 10th Gen: Which Should You Buy?” for our comparison of AMD’s reported performance figures of the different offerings against Intel CPUs at each price point.

Exactly how realistic these claims are is yet to be tested by independent benchmarkers at large, though there have been some reported leaks of benchmarking figures which we will detail below, as ever though, these should be taken with a pinch of salt. The true test will of course require thorough independent benchmarking following product release on November 5th. Watch this space for our own Ryzen 5000 series benchmark tests.

The first thing which should be stated is that the 5900X and the 5950X are designed and targeted with different users in mind. AMD has marketed the 5950X as its “best of both worlds” CPU, those worlds being “workstation” and “gaming”. This is a fairly bespoke offering and does not have a direct competitor in the Intel product range. The 5900X by comparison is geared towards the high-end gaming market and is a challenger to the Intel i9-10900K. The process node, chipset, and PCIe 4.0 compatibility are identical in both CPUs as is, impressively, the TDP. Both processors have a similar cache. In the key metrics of clock speed, core count, and thread count, however, the two CPUs differ. See below for a breakdown of the specifications of both CPUs based on AMD’s released data.

Now we’ve seen the specifications, let’s take a deeper dive into the performance data we currently have for both the Ryzen 5950X and the Ryzen 5900X. We will discuss what each of the heavyweights of the new Ryzen 9 5000 series offers to the consumer and summarize which is the most suitable for you.

There is no doubt that the 16 cores and 32 threads of this processor should offer superb performance for any tasks which rely on the use of multiple cores, this includes photo and video editing software (Adobe Premiere, After Effects, Photoshop), 3D modeling and rendering programs (Solidworks, AutoCAD), scientific simulation software (MATLAB), and certain games, such as Kerbal Space Programme, that require simulation of complex physics.

During the official reveal conference, AMD did a performance comparison of the various tasks utilized by “content creators” for the 5950X against their go-to workstation CPU of the previous generation, the Ryzen 9 3950X. Subsequent benchmarking by Sisoftware Sandra has also compared the two using arithmetic and multi-media testing. If these results are to be believed then the crown for most powerful workstation CPU definitely goes to the 5950X. 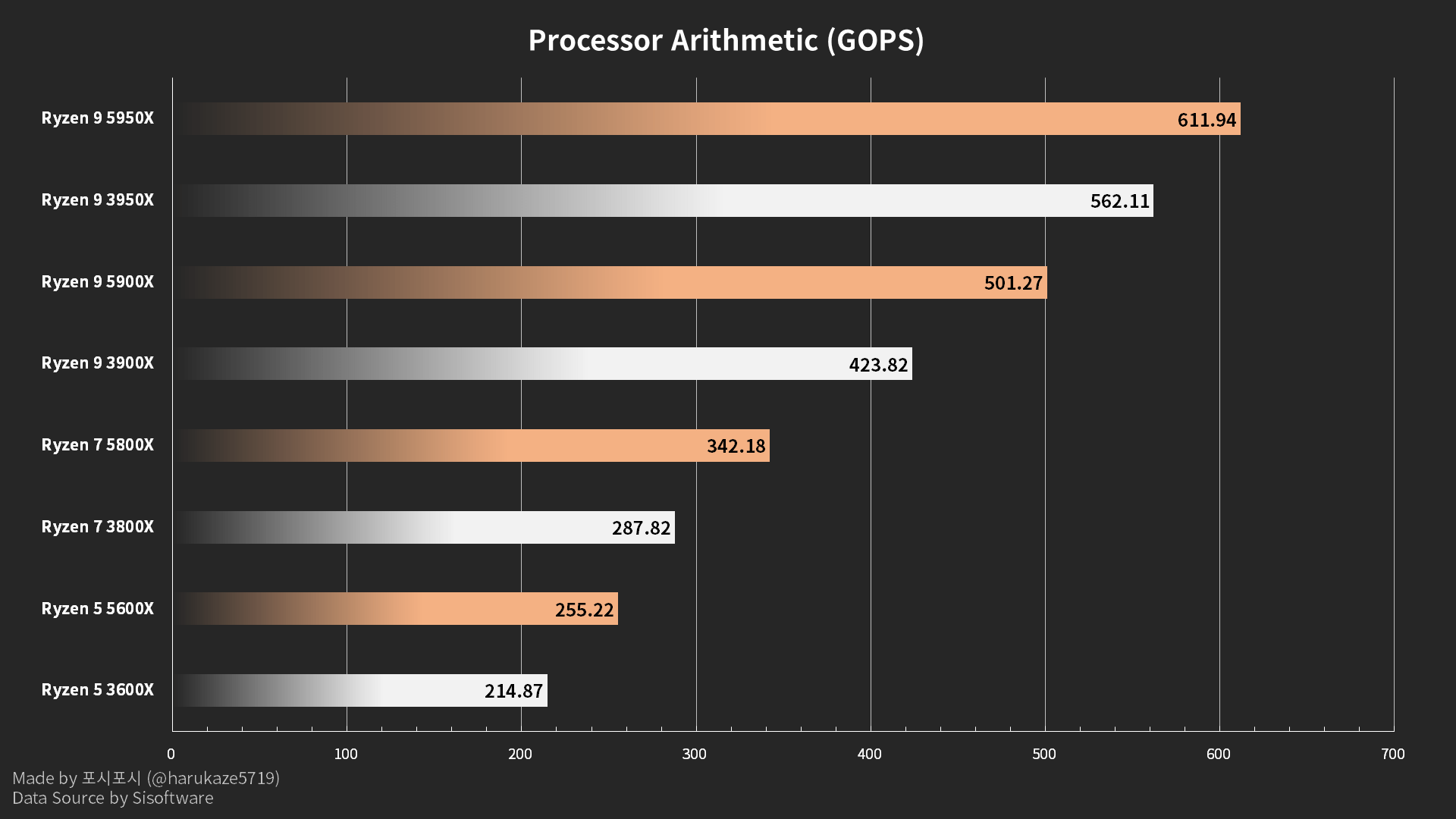 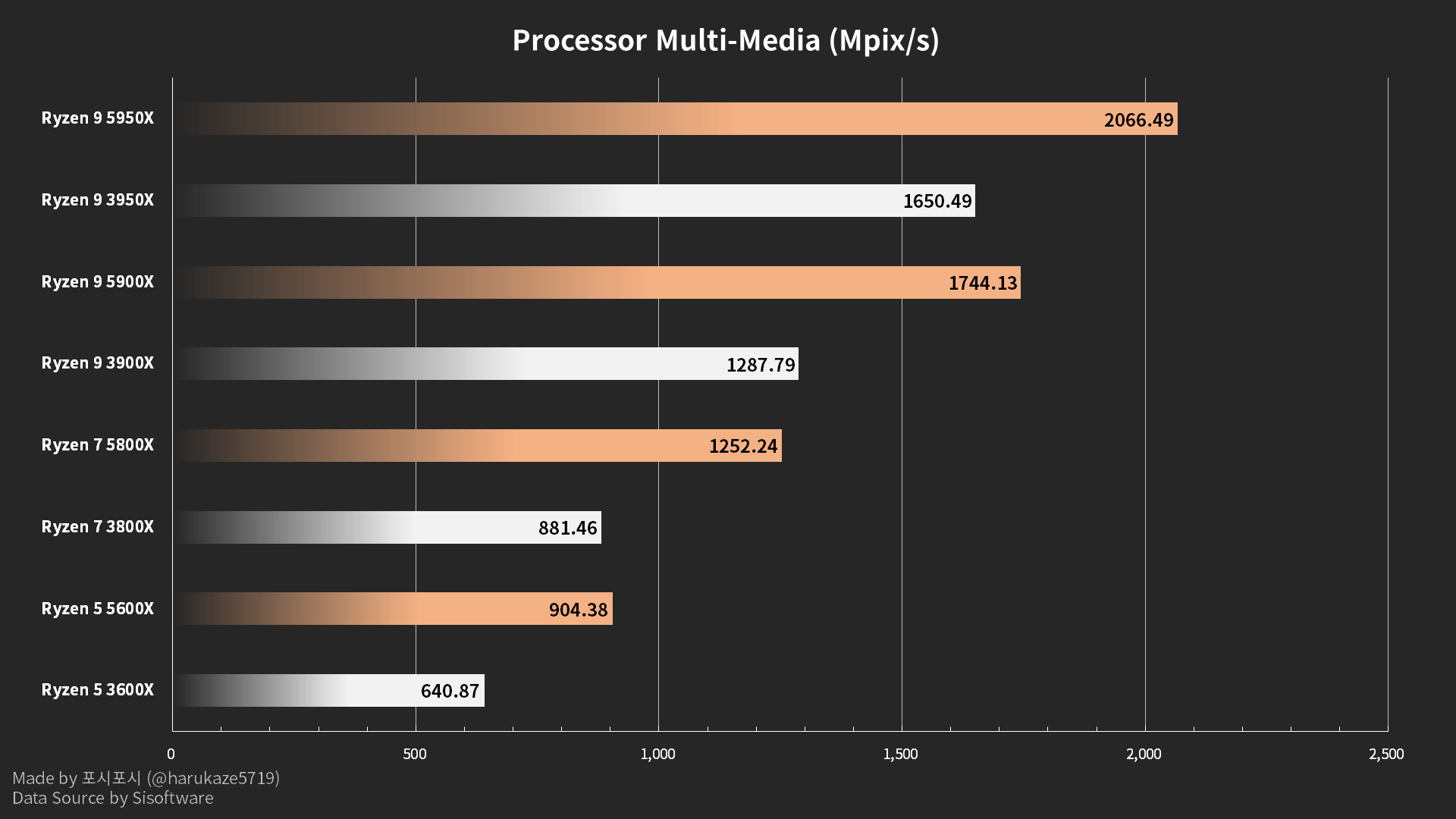 As stated, the selling point of the 5950X is in its ability to straddle both content creation and gaming. Clock speed is the key metric when it comes to gaming performance, and here the 5950X boasts a base frequency of 3.4Ghz, which can be boosted to 4.9GHz for a single core. Unsurprisingly the 5950X blows the 3950X out of the water in the gaming benchmarks AMD conducted, and crucially also edges ahead of Intel’s best gaming CPU, the i9-10900K, in three out of four tests.

Conclusive results from overclocking will only be available after November 5th, however, if the recently leaked data dug up by @TUM_APISAK is anything to go by, things look promising. The results from Geekbench 5 show that the CPU, likely on a Hackintosh build, being overclocked to 6.0Ghz which means 19.2% higher single-core performance and 12.9% higher multi-core performance compared to the previous Ryzen gaming heavyweight – the Ryzen 9 3900X, which clocked 5.89Ghz. We have yet to come across any such testing on the 5900X so cannot make a direct comparison. Additionally, it should be noted that such speeds will have been achieved through advanced cooling techniques, and it’s therefore unlikely this will be achievable by your average retail user, still, it offers us a like-for-like comparison.

The 5900X offers a base clock speed of 3.7Ghz, which is 0.3Ghz higher than that offered by the 5950X, but trades this off for 0.1Ghz a lower boost clock speed of 4.8Ghz. Considering AMD’s overdrive function will always attempt to boost the processor speed when doing high-performance tasks such as playing the latest demanding games, then it is unlikely either processor would ever run at base clock speed in this scenario.

The aforementioned Geekbench leak assigns a higher single-core performance score to the 5900X of 1605, compared to the 1575 achieved by the 5950X. In multi-core performance the 5900X underperforms on a relative basis, attaining a score of 12869 whereas the 5950X comes in at 13605.

Ultimately, without testing, it is unclear how all of this will translate from game to game. It is possible that certain games, particularly those less suited to AMD architecture, will underperform slightly on the 5950X compared to the significantly cheaper 5900X.

Overall it is unlikely that there will be significant performance differences in either card when it comes to gaming. Based on AMD’s data, the 5900X did perform better when running Shadow of the Tomb Raider and Far Cry New Dawn but underperformed in Ashes Of The Singularity and in Total War: Three Kingdoms.

Although AMD’s presentation did not include the same “content creators” test data for the 5900X, we can safely assume the lower core count (12) and thread count (24) means that it will be outclassed however in all workstation tasks by the 5950X. This is supported by the results of arithmetic and multi-media testing by Sisoftware Sandra, although interestingly, it does show the 5900X as having an edge over the 3950X in multi-media processing.

Taking into consideration all of the above the Ryzen 9 5950X is an unusual beast. AMD has created a CPU which is a true double threat, although the high price does reflect this capability. For those interested purely in gaming, there seems little justification for the $250 difference in price compared to the 5900X. However, if your needs do extend to both gaming and workstation use then the 5950X is unparalleled. A gaming streamer or YouTuber who would otherwise be using two separate PCs – one for gaming the other for editing – might consider the possibility of saving space and combining the two functions in one machine. Current data suggests the more expensive CPU to be of at least comparable performance to the 3950X for workstation purposes and superior for gaming, though we would advise potential buyers of the new processors to wait for more conclusive testing and to see whether or not the 3950X drops in price from where it currently stands around the $689 mark.

To wrap it up, if you’re building a powerful gaming rig then we’d recommend the 5900X. If you need a workstation PC that’s just as powerful when playing games, the 5950X could be the one for you, though we recommend waiting until after November 5th to see if the price to performance makes it worth purchasing over the 3950X. Of course, if money is no object and you simply must own the pinnacle of CPU technology, then the 5950X would make any new build PC a truly impressive machine.