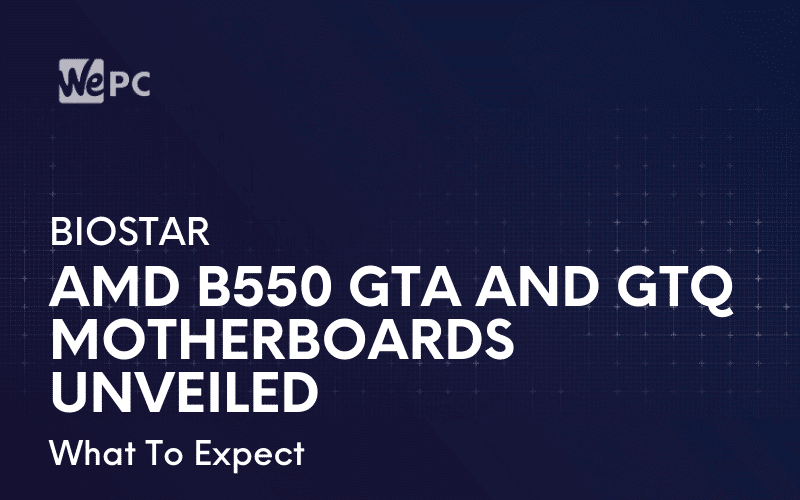 The RACING B550GTA and RACING B550GTQ motherboards are designed for AMD’s B550 chipset which allows them to run AMD’s 3rd Generation Ryzen processors.

These two new motherboards will use the same high-quality design and build that Biostar motherboards are known for.

The first motherboard announced, the B550GTA, comes in an ATX form factor which will be suitable for buyers looking to build an impressive gaming rig. With additional expansion slots and great connectivity, the B550GTA motherboard is for the enthusiasts among us.

This motherboard will feature a Micro-ATX form factor which means it’s better suited for PC builders who want a more compact setup. It will still be able to perform on par with the regular ATX form factor found in the B550GTA motherboard but it will take up far less space in your PC case.

For those looking to overclock, boost clock speeds will be able to reach up to 3.2 GHz with Biostar’s new updated BIOS interface. Both motherboards will also be equipped to support up to 128 GB of dual-channel DDR4 RAM.

These motherboards come with the new PCIe 4.0 slots which will provide a transfer rate of 16 GT/s with 2 times more bandwidth than the old PCIe 3.0. However, it is also backward compatible.

Alongside this, buyers will benefit from low latency due to the PCIe M.2 4.0 slot which will give you a higher bandwidth of 64 GB/s. This is again twice as fast as the previous PCIe 3.0.

These two motherboards have the signature stylish Armor Gear enclosure that other boards in the RACING series feature.

More than just a pretty face, this design has two practical purposes. The Armor Gear design helps to dissipate heat generated by the motherboard and it will also house the LED ROCK ZONE RGB lighting. This gives you the chance to easily customize the look of your motherboard via the VIVID LED DJ software.

Overall, it looks like Biostar has announced two solid motherboard options for those running AMD 3000 chips. At the moment, there’s no word on how much these two motherboards will cost or when they will be available for purchase. However, if we hear anything more on these motherboards, we’ll be sure to keep you updated.