As had been previously leaked, the trusty GTX 1650 is getting another revision, according to details posted by manufacturer GALAX. The 1650 Ultra is a new variant of the card that rather than being based on the TU117 or TU116 GPU core like previous 1650 cards, uses the TU106 GPU core. This is the same core that powers RTX cards like the 2060 and 2070. Most likely this is Nvidia using leftover cores from their top-end GPUs that did not meet their testing standards at higher clock speeds but are perfectly adequate chips for using in mid-range cards. Rather than let those chips go to waste, they simply use them in mid-tier cards, at a lower price. 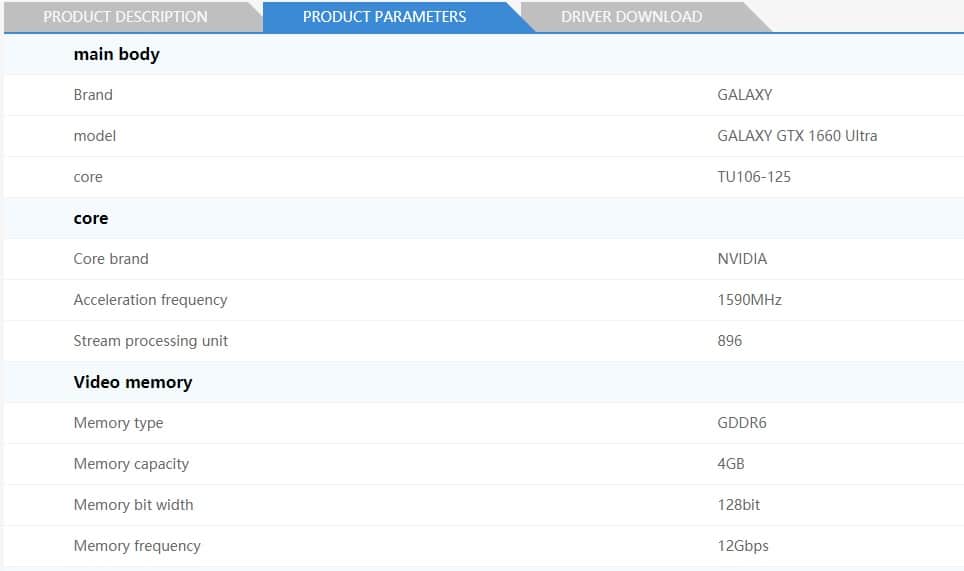 In terms of power draw, these cards are set to fit somewhere between the base GTX 1650 cards and the GTX 1650 Super, as GALAX says that this card has a power draw of 90W.

Exact pricing and availability are not completely clear right now, with this reveal coming from manufacturer GALAX rather than Nvidia themselves. It’s likely going to come in towards the top end of current 1650 pricing, but certainly lower than the top-end RTX cards Nvidia has available too. Hopefully, we’ll get an official word on this card from Nvidia sometime soon, as well as information on international pricing and availability.

We’ll have to wait and see, but often these mid-range Nvidia cards based on cut-down versions of top-end cards can be excellent candidates for overclocking, as you can usually comfortably get them a little closer to the performance of the top-end cards without overheating.

In the meantime, if you’re looking to upgrade your GPU with one of the recently discounted cards Nvidia has got on offer, check out our guide to some of the latest GPU discounts over here. Or check out our comprehensive guide to the best GPUs over here.