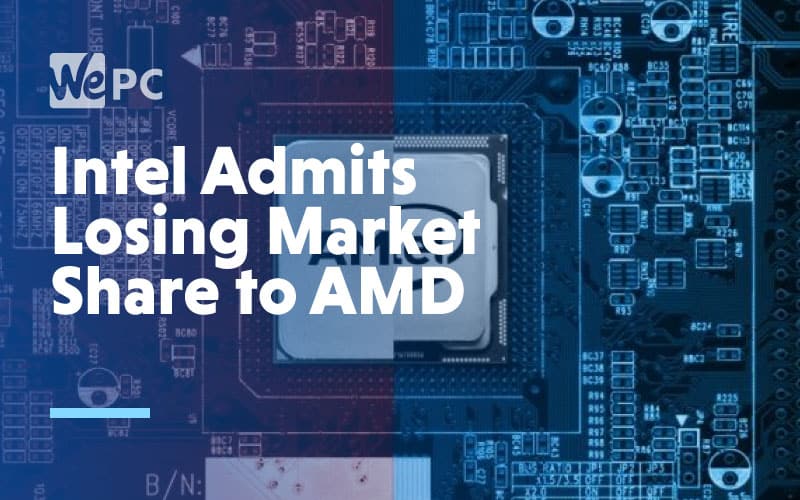 While it may come as no surprise to some, Intel has finally come forward and admitted that some of their market share has been lost to competitors such as AMD.

At a recent Citi Global Tech Conference, Jason Grebe, Corporate Vice President spoke to an analyst about Intel’s market share. He confirmed what had already been suspected, that Intel lost a share of the x86 market to AMD and that further challenges would need to be tackled in order to keep hold of its majority share in the market.

This was no doubt a difficult fact to face and admit, but Intel has vowed to come back with a fight.

AMD wowed with a comeback with its Zen architecture. This managed to disrupt Intel’s seemingly firm grasp on the x86 market – leading to a CPU market price war unlike we’ve seen in recent years.

A clear mistake made by Intel was that they didn’t expect AMD to make such a strong comeback.

The good news for fans of Intel is that they vow to take this misstep in their stride and work on rectifying it in the future.

Intel’s Plans for the Future

Jason Grebe had this to say about Intel’s future take on their market share:

“In general, if there is a CPU sale happening on the planet, we want to be involved in it. So we don’t look at any segment of the market and say, okay, we are going to walk away from that segment or that we’re not interested there. We want to aggressively compete in all segments. As we have gone through the supply issue kind of in the last six to 12 months on the PC side, we had to walk away from some low-end mobile share as well as some channel desktop share. But as we continue to improve our supply situation, we’ll continue to get more aggressive there.”

Intel’s loss of market share can be boiled down to a letdown on the mobile and desktop side of things, which is something AMD’s Zen offerings are more than happy to otherwise fulfill.

AMD is currently providing better competitive performance at a lower cost – a no brainer for users in a lot of cases.

Intel Lays Out AI Strategy for the Future

The AI market continues to be one of the biggest growth drivers in the market, and this looks to continue. The silicon triumvirate of Intel, AMD and NVIDIA are focusing heavily on AI for the future.

Intel Xe is due to launch next year, which will mark its entrance into the GPU market with AI interfacing. This looks like they could start to challenge NVIDIA, which could mean getting back some of the market share already lost to competitors.

When asked about AI strategy at Intel, Jason Grebe gave us some insight into what to expect in the coming years.

“So our strategy on AI is pretty straightforward. We are going to start with our Xeon processor, which is our core product line. We’re going to build custom ASICs for training and inference to go compete directly against our competition. We’re eventually getting into the GPU business 1.5 years, two years from now. And we’re going to have a full portfolio of products that could service whatever AI is required. And again, from a workload perspective, we’re extremely bullish on AI. We think over 70% of workloads over the next couple of years will have some type of AI.

“And our strategy at Intel is to have AI in all of our silicon products from the data center all the way out to the edge including our Movidius product lines at the edge all the way back into the data center. So we’re extremely bullish about our ability to compete here and gain back share.”

This announcement shows that Intel is fully aware of their position in the market. It looks promising that they’re taking the competition seriously and their vow to do more can only be a win-win situation for Intel and their users.

More competition means a price war is likely, which will be music to the ears of consumers looking for the best deals on the market.