Google Stadia vs Apple Arcade: Which is Best For You? 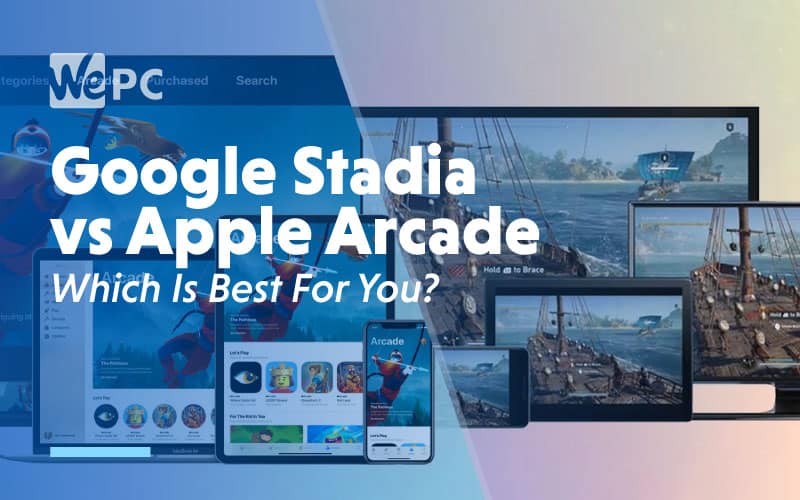 It looks like game streaming services are gathering in popularity already. We have new platforms rising up left, right, and center, and all of them offering different experiences for users. Two of the biggest names in the game right now are about to battle it out. So, will it be Google Stadia or Apple Arcade that comes out on top? Read on to find out.

Price is obviously a huge factor when it comes to making any kind of purchase decision. And, while the price points for both services are fairly low, that doesn’t mean they don’t make a difference.

The Google Stadia Base version is completely free, but you will need to pay individually for the games you wish to play, so it will probably costing you more in the long run if you plan on building up a good library of games.

The Google Stadia Founder’s Edition, on the other hand, comes with a fair price tag. The initial cost of $130 gets you a controller, Google Chromecast, and a Google Pro subscription for three months, giving you access to their wide library of games. After that, the monthly price will be $9.99.

Apple Arcade comes in considerably cheaper than the Stadia does. There are no upfront costs to speak of, although you can only access the service through Apple products. So, if you don’t already own an iPhone, iPad, Macbook, Mac, or Apple TV then you won’t be able to take advantage of the platform.

For access to their full library of games, including family sharing, Apple Arcade comes in at just $4.99 a month. So, the savings compared to the Stadia will soon add up. In fact, just based on the monthly cost, it comes in at $60 cheaper over a year.

Next up, let’s take a look at what kind of features each of these services will be bringing to the table.

One of the biggest concerns for many when it comes to game streaming services is how the reliability or strength of their connection will affect gameplay. If your connection suddenly drops, then you risk being booted from whatever pivotal game moment you were in. Sadly, Google Stadia doesn’t offer any form of offline play, you’ll always need a connection to access your library.

But, Apple has announced that the Apple Arcade will come with offline play functionality. You simply download your games to your device and you can play wherever you are – no matter the strength of your connection.

As functional as offline play is, it does limit how easily you can put down one device and pick up another. With Google Stadia, you can switch devices seamlessly thanks to the whole service being hosted online. With Apple Arcade though, it’s not clear how easy this will be.

Apple Arcade is also, of course, limited to Apple products. This means you can only access your games on iPhone, iPad, Macbook, Apple Mac, and Apple TV. It does offer a small lifeline for Mac gamers though, as they’re usually the ones left behind when it comes to gaming compared with Windows users.

Google Stadia will be available to play on practically any device that can run YouTube or Chrome. That includes smartphones, tablets, PCs, laptops, and smart TVs. This gives them a huge advantage over Apple Arcade for many gamers who tend to prefer the power of non-Apple products for most of their entertainment needs.

The Google Stadia comes with its own controller (if you fork out for the Founder’s Edition), but the platform itself will work with the majority of modern USB controllers, as well as your standard keyboard and mouse combo.

Apple, on the other hand, won’t have a dedicated controller. But, they have confirmed that you will be able to use PS3 controllers and Xbox One controllers with its service. So, console owners won’t need to fork out on any new hardware.

Google Stadia is only available in the U.S., U.K., Canada, and Europe. While this covers a good chunk of the gaming market, it leaves many gamers from around the world without access. Apple Arcade is available in over 150+ countries, so it will find it much easier to break into the global gaming market.

When it comes to a gaming service, the games you’ll be able to play are surely the number one concern for the majority of consumers. Both services will come with access to a large library of titles right off the bat.

First, let’s take a look at Apple Arcade. They’ve announced that their service will come with over 100 games on launch day, with 100 more to be added in the following weeks. That’s a considerable amount of games to sink your teeth into. Titles include Sonic Racing, LEGO Brawls, Beyond a Steel Sky, and Pac Man Party Royale as well as a whole host of indie titles.

In fact, Apple has stated that they intend to push hard for indie games to be a big part of their service. This means users probably won’t be seeing many (if any) AAA titles on the service. But, they will get to play through new and lesser-known gems.

Right at the other end of the spectrum, Google Stadia has been pushing the AAA games right from the start. They’ve managed to secure titles such as Destiny 2,  Assassin’s Creed Odyssey, Cyberpunk 2077, and Borderlands 3 to name a few. In fact, their library is pretty impressive, especially for a brand new product in an untested market.

Their library is considerably smaller than that of Apple Arcade though. Right now, they only list 36 games on their site, although this is sure to increase if the service picks up traction.

For me, Google Stadia comes out on top here. It might be a bit pricier, but you get a wider platform of devices to play on as well as access to more of the games you know and love. But, it’s by no means a clear cut victory. The offline play offered by Apple Arcade is a big draw, as is the lower price combined with a bigger library.

At the end of the day, it feels to me like it falls down to whether you’re an Apple person or not. The only Apple products I personally own is one six-year-old iPad that I use for my Dungeons and Dragons character sheet. So, a service that’s exclusive to Apple won’t do me much good.

But, what about you? Would you choose Apple Arcade or Google Stadia? Let us know in the comments below!