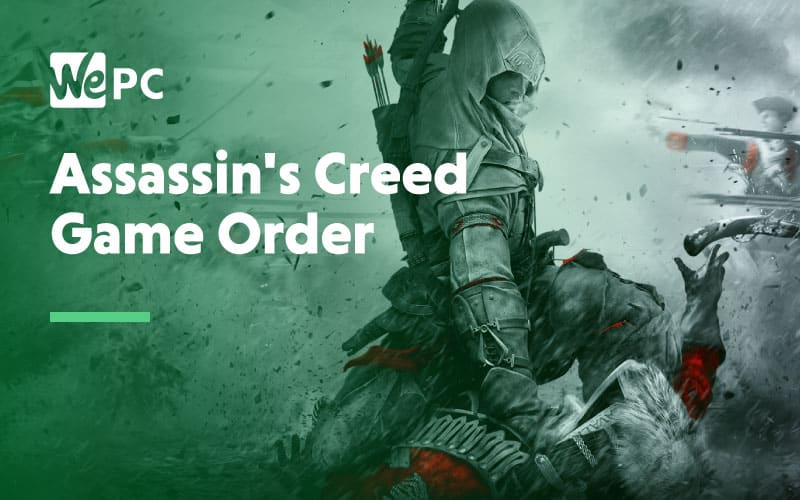 The Assassin’s Creed game series is easily one of the biggest game franchises out there right now. Since the release of the first game in the series back in 2007, Ubisoft has created a whole host of action-packed games for fans to enjoy. Here, we take a look at every game released all in one place for your reference. So, without further ado, let’s take a look at the Assassin’s Creed game order.

Our list will be focusing on the main series of games released on PC, Playstation, and Xbox gaming systems. There has also been a long line of mobile games for iOS and Android, as well as the odd release on handheld consoles. These games don’t directly relate to the main releases though, so we’ve omitted them from this list.

The first game in the series was released a whopping 12 years ago and was our first introduction to the world of Assassin’s Creed. Surprisingly, when the game was first released, it was a truly unique experience for gamers. It had a whole new take on story-driven gaming using genetic memory to transport us to another time.

We follow the story of Altair ibn La-Ahad in the Middle East during the medieval ages as he stabs his way through the city. As groundbreaking as this game was, many players soon found that it fell into a highly repetitive cycle, restricting it’s replayability factor considerably. What it did serve as was an exceptional launchpad for the rest of the series, as many games followed in its sneaky footsteps.

The second game in the series follows on directly from the first when it comes to the modern-day storyline. But, this time we get to explore Renaissance-era Italy as Ezio Auditore da Firenze. This new protagonist is still one of the most well-loved characters in the franchise, and this second installment remains a firm fan favorite because of this.

The studio made some significant changes to the gameplay for this version, making the whole process smoother and more enjoyable for the players. Anyone who has played this series from the beginning still seems to cling to the belief that this was the best Assassin’s Creed game ever, and it’s easy to see why.

Knowing that they had a good thing going with Ezio, Brotherhood simply carried on his story and added a few small changes to mechanics to make this a standalone game. We’re back in Italy, but this time in Rome instead of Venice.

The main change in this game was the ability to hire and recruit other assassins to assist you in combat scenarios. Or, you could send out your hirelings to complete missions of their own and bring you the rewards. It was an interesting addition that didn’t tamper too much with the improved, streamlined gameplay we’d become used to.

Revelations brought us the final chapter in Ezio’s story as we see how he fared after his capture at the end of Brotherhood. But, this time, we’re leaving the familiar cities of Italy and heading into the Ottoman Empire and Istanbul.

Other than the setting, there aren’t many noticeable changes in terms of gameplay. There was the introduction of zipline travel and new ways of assassination, as well as a tower defense mini-game. But, ultimately this became one of the most forgettable installments in the series. Unless, of course, you’re here for the story as this does a great job at wrapping up Ezio’s tale.

As we leave Ezio behind, we are now introduced to a new protagonist in the form of Native American Ratonhnhaké:ton as the game takes place in Revolutionary America. Our new character does what he can to blend into American society – like any good assassin would – so changes his name to Connor to become just another face in the crowd.

With this game, we leave the urban sprawl of big cities behind and instead have the chance to explore a more open-world setting. The game introduced free-running mechanics as well as naval exploration, hunting, and weather changes to help immerse the players deep into the wilderness.

For the fourth installment, we’re staying in colonial America, but back a few decades from the setting of Assassin’s Creed III. This time, we follow the journey of Edward Kenway, the Grandfather of Connor from the previous game.

As the name suggests, this game is all about piracy, and that brings with it a new and improved naval combat system. There’s also a lot more world to explore now that the seven seas are under your command. We also see a return to the management system introduced in Brotherhood that allows you to build up your own assassin’s guild. Apart from those elements, it stays pretty true to the style of game we’ve grown used to but has been a very popular installment nonetheless.

Although it was originally released as a DLC for Black Flag, Freedom Cry was soon released as a standalone game soon after. Set twenty years after the events of Black Flag, it follows Adéwalé, a slave-turned-assassin as he too traverses the high seas.

As you might expect, being a previous DLC means there weren’t any additional gameplay features with this game. The storyline is different enough though, as is the additional gear available. So, it’s just about acceptable as a separate game.

For a franchise as large as this one, there’s always going to be some games that miss the mark. And, that’s what we got with Assassin’s Creed Rogue when it was released back in 2014. This is the first game that had you playing as a Templar, rather than an assassin – and this is heavily reflected in the gameplay.

There is still an element of naval exploration that we had grown used to from the previous two games, but this time we were in the cold expanses of the Arctic, rather than the sandy beaches of the Caribbean. There are new weapons included in this game, but that’s the only real addition.

Naval exploration was put on hold as we traveled back to the familiar sprawling European cities of previous games. This time, we’re in Paris right in the throws of the French Revolution. We follow the story of Arno Dorian, and as this game placed more of a focus on RPG elements, the story became more integral than ever.

This was also the first game in the series to introduce co-operative multiplayer options, giving you a chance to work with your friends as you played through the game. Apart from this, and of course a few new weapons to boot, the game remained pretty much unchanged when it came to mechanics.

With Syndicate, we have quite the time hop as we travel from Revolutionary France into Victorian England. This was the first game in the series to introduce multiple protagonists in the form of twins Jacob and Evie. This was probably one of the more exciting additions for me as I am that person who always has to play as a girl when I get the chance.

Gameplay-wise, we didn’t get much, though. Of course, there had to be the introduction of new weapons, what would an Assassin’s Creed be without them? And, the multiplayer options were scrapped completely. This was to be the last game before the seismic shift that Origins would bring to the franchise.

With Origin’s we see the gaming franchise spring out of its slump and bring us a new, exciting version of the beloved game. We go right back to the start, in Ptolemaic Egypt and follow the story of Bayek. As he sets out to seek revenge after a terrible tragedy, his adventures culminate in the creation of The Brotherhood.

The gameplay experienced a serious overhaul with this installment, especially when it came to combat. You were now able to hit multiple enemies with a single attack, but this did mean that multiple enemies could swarm you much more easily than before. We were also treated to a much more open world than ever before, opening up more chances for exploration.

Going back even further than Origins, Odyssey takes us back to the Peloponnesian War and gives the player’s the chance to choose which side of the war they wish to fight on. You also have the choice of two protagonists again, Alexios or Kassandra.

Odyssey is similar to Origins in terms of gameplay with a focus on role-playing and, you guessed it, new weapons. There’s also the return of naval combat similar to earlier versions of the game.

So, there you have it. All of the main Assassin’s Creed games, in order. Which one was your favorite to play? Let us know in the comments below!