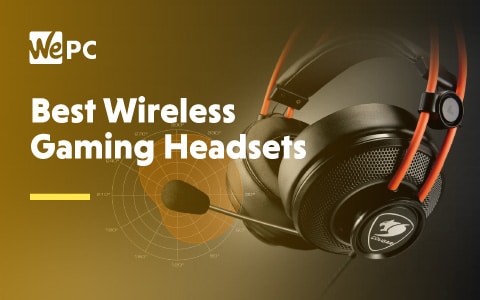 It’s always difficult selecting a new headset, especially in today’s market where consumers have an endless list of quality products to choose from. How are you meant to find the time to troll through user reviews, product research, and everything else that comes with the tedious process of selecting a new hardware peripheral? Sometimes, there just aren’t enough hours in the day.

Fear not though, that is where WePC lends a helping hand. We understand how important it is for competitive gamers to have crystal clear, accurate sound in-game. For that reason, we’ve decided to give you guys our comprehensive rundown of what we believe are the best wireless gaming headsets money can buy.

Let’s take a brief look at some of the headsets that will feature in this best of guide:

This is pretty self-explanatory, you don't want a wireless headset that runs out of charge after 2 hours. The average battery life for a modern headset is anywhere between 15 and 30 hours. Anything more, you're laughing.

Sound quality is the number one aspect of any headset or audio device. The quality of your sound comes down to several contributing factors which we'll touch upon shortly. The best way of telling whether or not the sound quality is up to your standards, though, is by simply going out and testing it!

This is something more catering towards the online, competitive gamers out there. If you just like to play single-player campaigns, then you don't really need a mic. However, for the competitive esports players out there, a quality microphone could be the difference between winning and losing.

Charging time basically means how long it takes your headset to charge from dead. This varies with all headsets, but the faster, the better.

When we say range, we reference the headset's frequency response. This is one of the more technical aspects of a wireless headset and roughly relates to pitch. At the lower end of the spectrum are your bass notes; the high frequencies are the high notes. So, if one headset can produce 10hz, and another can only produce 20hz, the first can theoretically produce lower sounds.

Take the frequency with a pinch of salt, though, because it rarely refers to how good the sound quality is.

Latency is a huge factor in headsets, especially wireless ones. Because you are connecting via a signal, the sound can be delayed if your connection isn't fast enough. A lot of modern headsets have at least 2.4GHz connection speeds; anything below this should require further research.

If you’re looking for a headset, keep these key criteria in mind, and you’ll not go too far wrong.

Are Drivers Required For A Wireless Gaming Headset?

Having this feature dramatically reduces latency and increases range, two things that are crucial in wireless headsets.

Wireless headphones, for the most part, are compatible with pretty much every electronic device you can think of. TV's, Laptops, PCs, Consoles, Tablets, Phones, you name it, it will probably be compatible with that product.

That being said, some devices may require your headset to have Bluetooth or a mini-jack base station. If this is the case, you might want to be a little cautious when planning on which headset to go for. For example, the old Xbox One controller does not have Bluetooth. This means, if your wireless headset doesn't come with a base station, you're going to struggle to use them.

How we do this is by physically going out and purchasing the products we recommend. Once we've acquired a shortlist of recommendations, we start by doing our independent in-house tests to make sure they live up to our standards. Once we do our tests, we whittle down our shortlist into a final five or six, which become our best in class.

Numerous team members will test each headset to provide a consensus instead of just one person's opinion. This will hopefully give a more rounded and accurate representation of what each headset offers. 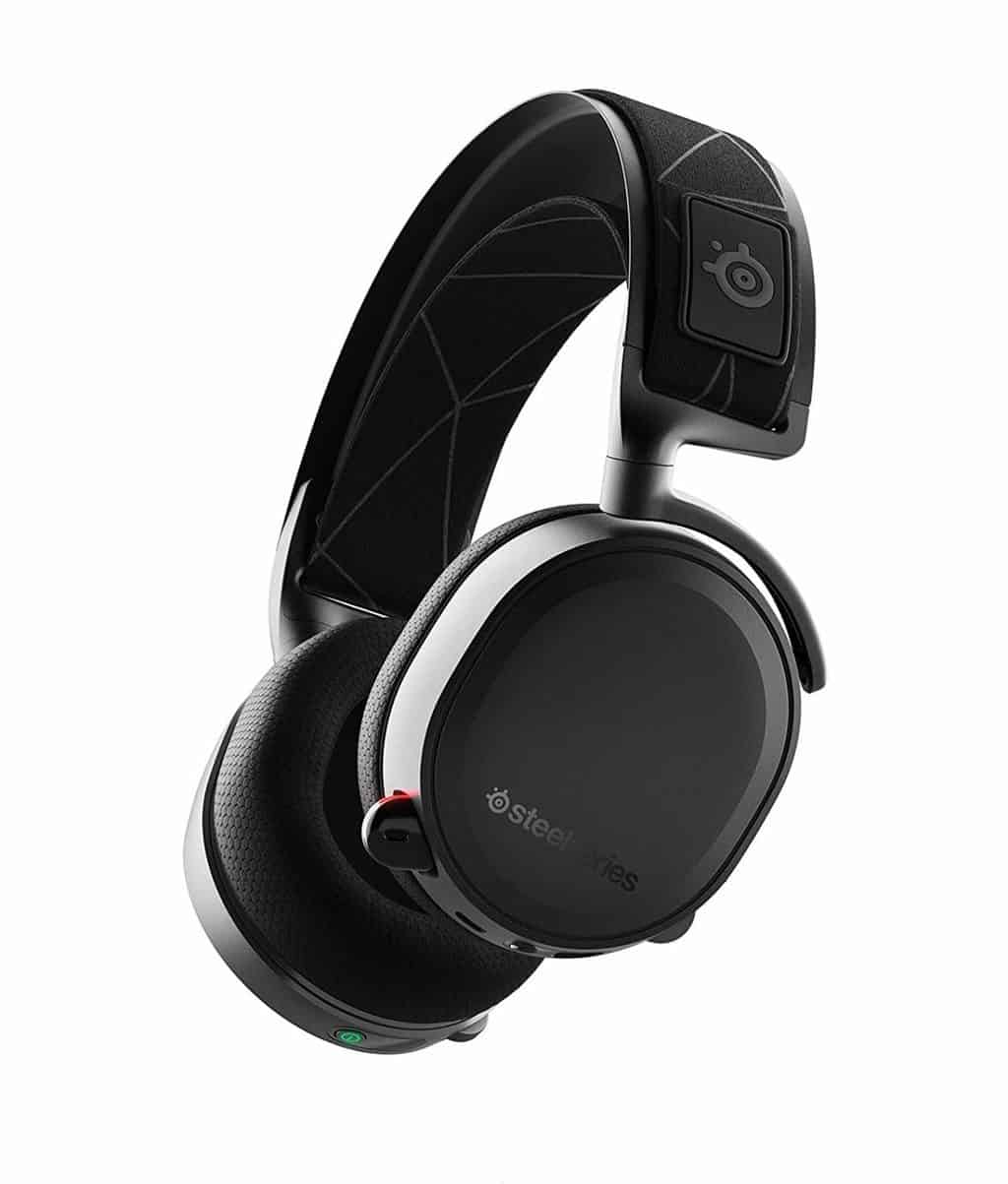 This is the second best-of-guide that the Steelseries Arctis 7 has taken the top spot for, and with good reason. They are simply the best, all-round headset currently on the market. Historically, wireless headsets have been criticized for below-par sound quality. However, this is most certainly not the case with the Arctis 7s. They have a superb 20+ hour battery life right out the box and have been ergonomically designed to reduce neck and head irritation.

The sound quality is the stand out feature of these headphones. However, Steelseries has equipped this headset with a fantastic microphone that provides crystal clear voice playback to your teammates in the heat of battle.

I found that my spatial awareness was heightened when using this headset. I could easily pinpoint enemies when playing intense FPS games such as CS: GO and PUBG.

Overall, a top-quality headset that provides everything you need for competitive gaming and at a very affordable price tag. 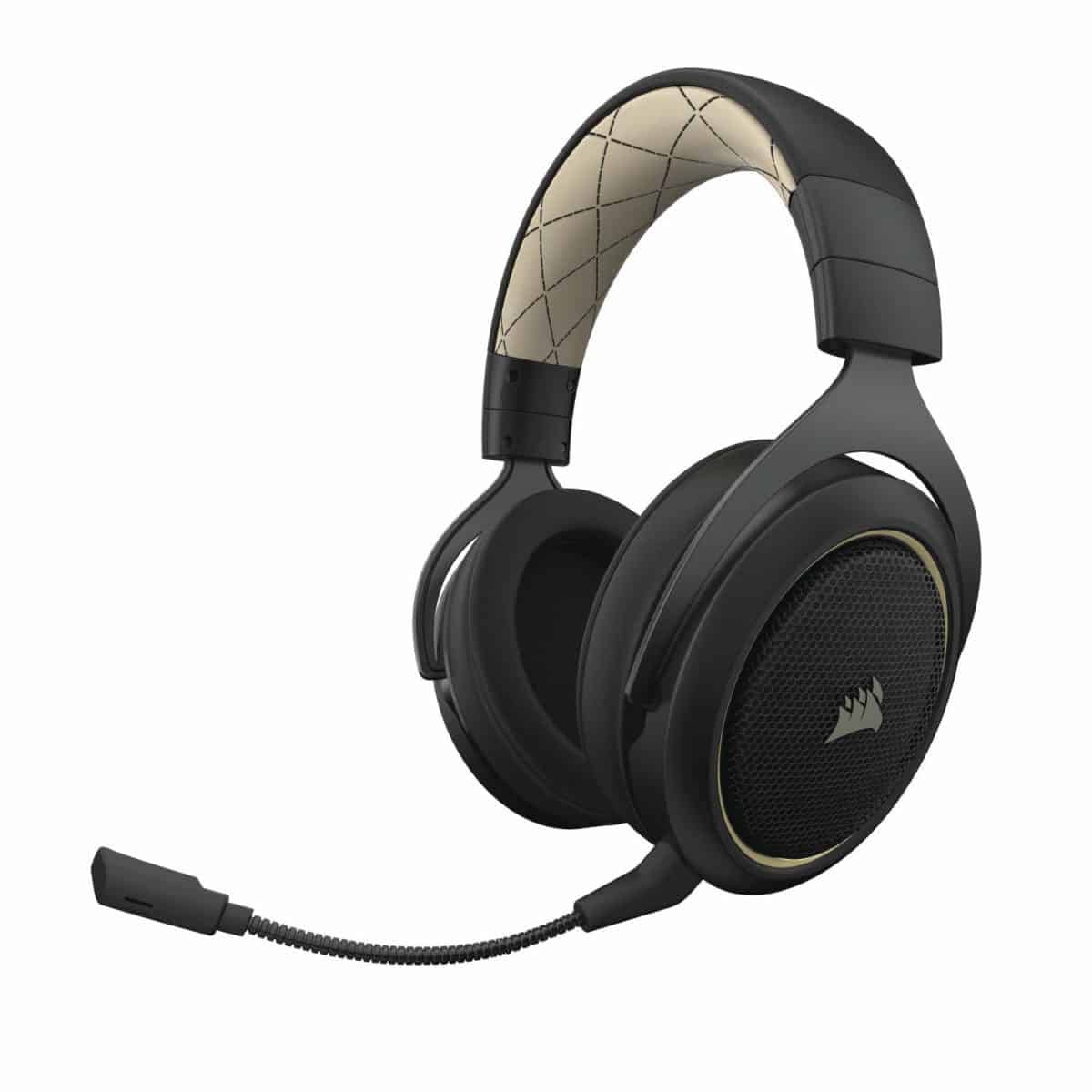 This might be one of Corsair's finest achievements to date, a high-quality wireless gaming headset at a low-end price tag.

When we think of Corsair, we usually think of RAM or cases. However, for over five years now, Corsair has been toying with side projects such as mice and headsets. The HS70 is one of those projects and a fine one at that.

The HS70’s get the budget wireless headset nod and for good reason. They are by far the cheapest in this list and offer the best value for money respectively. Sound quality is superb, as is the spatial awareness of this headset.

The microphone isn’t amazing, but for under $70 we will let Corsair off on that one.

If you’re looking for a great budget headset that does the job then look no further, the HS70 is the best budget wireless headset on the market. 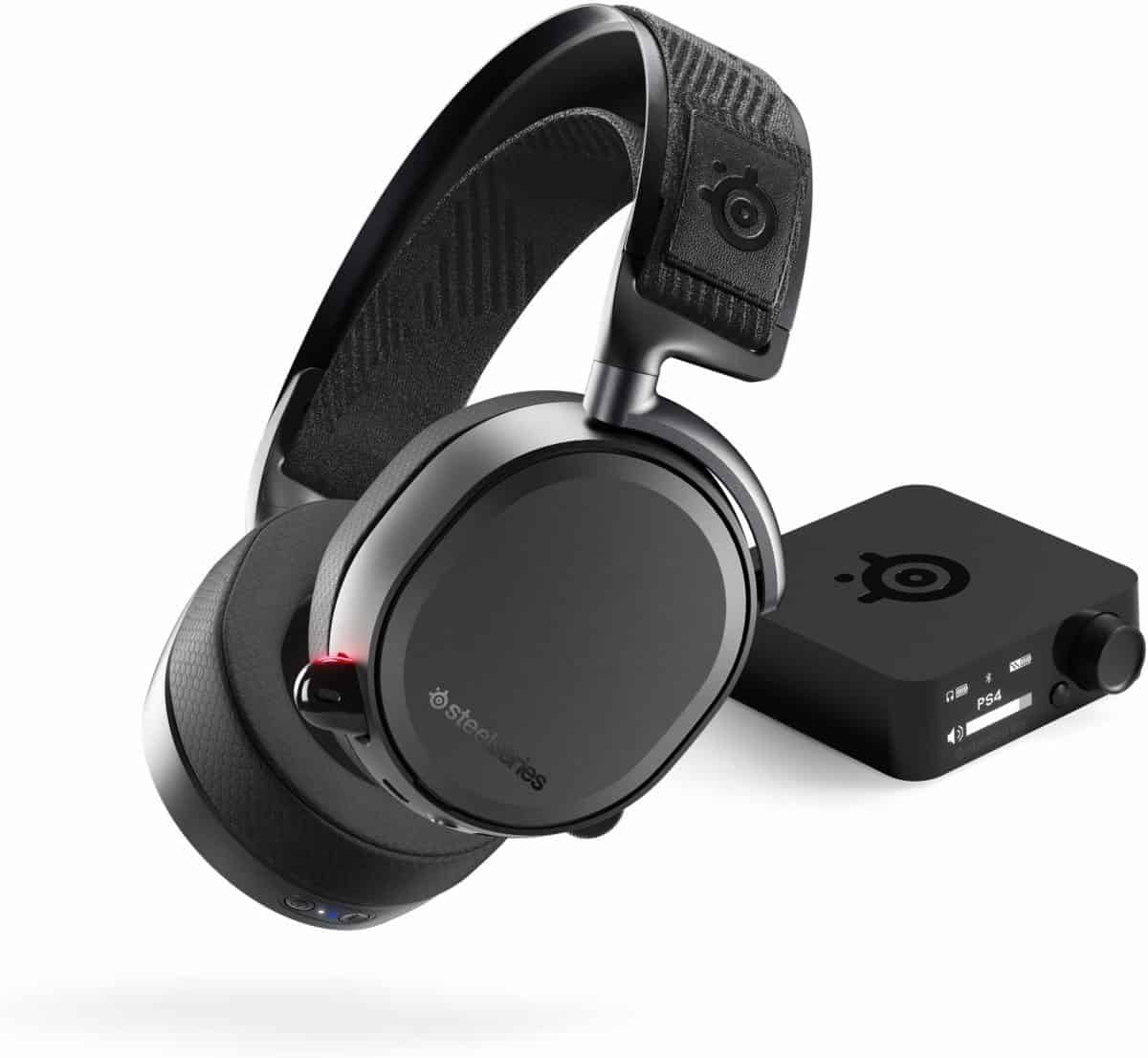 Just like our best gaming headsets page, it was a real struggle to choose between the Arctis pro headset and the Astro A50 for the high-end selection. We had to stay true to our word, though, and make the Arctis Pro the best high-end wireless headset available. They seem to offer that little bit more when it comes to reliability and brand confidence.

Anyway, that aside, the Arctis Pros come to the table equipped with excellent sound quality, superb microphone clarity, and cool aesthetics. Everything you desire from a top wireless headset.

Steelseries have designed the Pros with gamers in mind and have equipped the headset with batteries that last well in advance of 20+ hours. The frequency of the headphones ranges from 10Hz - 40,000Hz, branding the headphones as hi-res.

A cool feature of these headphones is the GameDAC that comes with them. This is the go-between from the headphones to the PC. You can physically change all the audio and mic settings via the GameDAC, making on the fly changes much more accessible.

The Arctis Pros might be the most all-around headset we have on the list, but be aware, they do come at a price. If you’re willing to break the budget a little, though, you will not be disappointed. 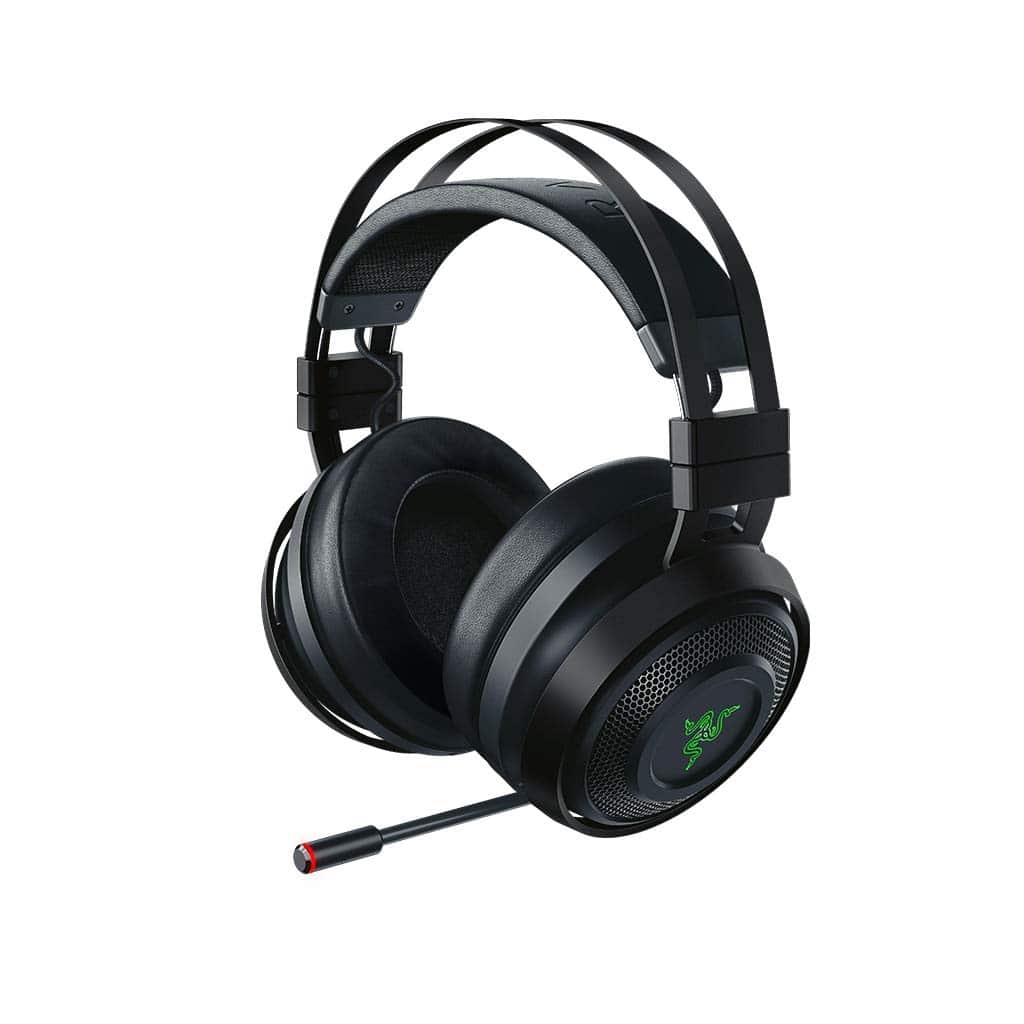 Next comes our console selection and it comes in the form of the ever-popular Nari Ultimate headset from Razer. I know what you're thinking, but give them a chance, they’re actually pretty good.

The Nari's were quite enjoyable to use if truth be told. This was mainly down to the cool Hypersense technology which made the earcups vibrate every time a grenade went off near your head. Let’s not take anything away from the sound quality though, as that was pretty good as well.

I mainly play FPS and know the importance of having good spatial awareness when in-game, well, I had no issues pinpointing enemies when using this headset. They were quite bassy, though.

I didn’t experience any latency issues, and battery life was again, more than adequate for my daily usage (20+ hours).

The two standout features are the Hypersense Technology and the 7.1 surround sound. Hypersense we’ve touched on above, but in short, it’s a technology that corresponds with in-game actions and vibrates whenever appropriate. 7.1 surround sound is pretty much what it says on the tin; it gives the user a greater understanding of what's going on around them at all times. Hugely advantageous for FPS gaming.

The Nari Ultimate can connect to your console with ease and is ready to go in minutes right-out-the-box.

All in all, I can't knock the Nari's from a console point of view and would highly recommend these to console gamers looking to get the most out of their gaming experience. 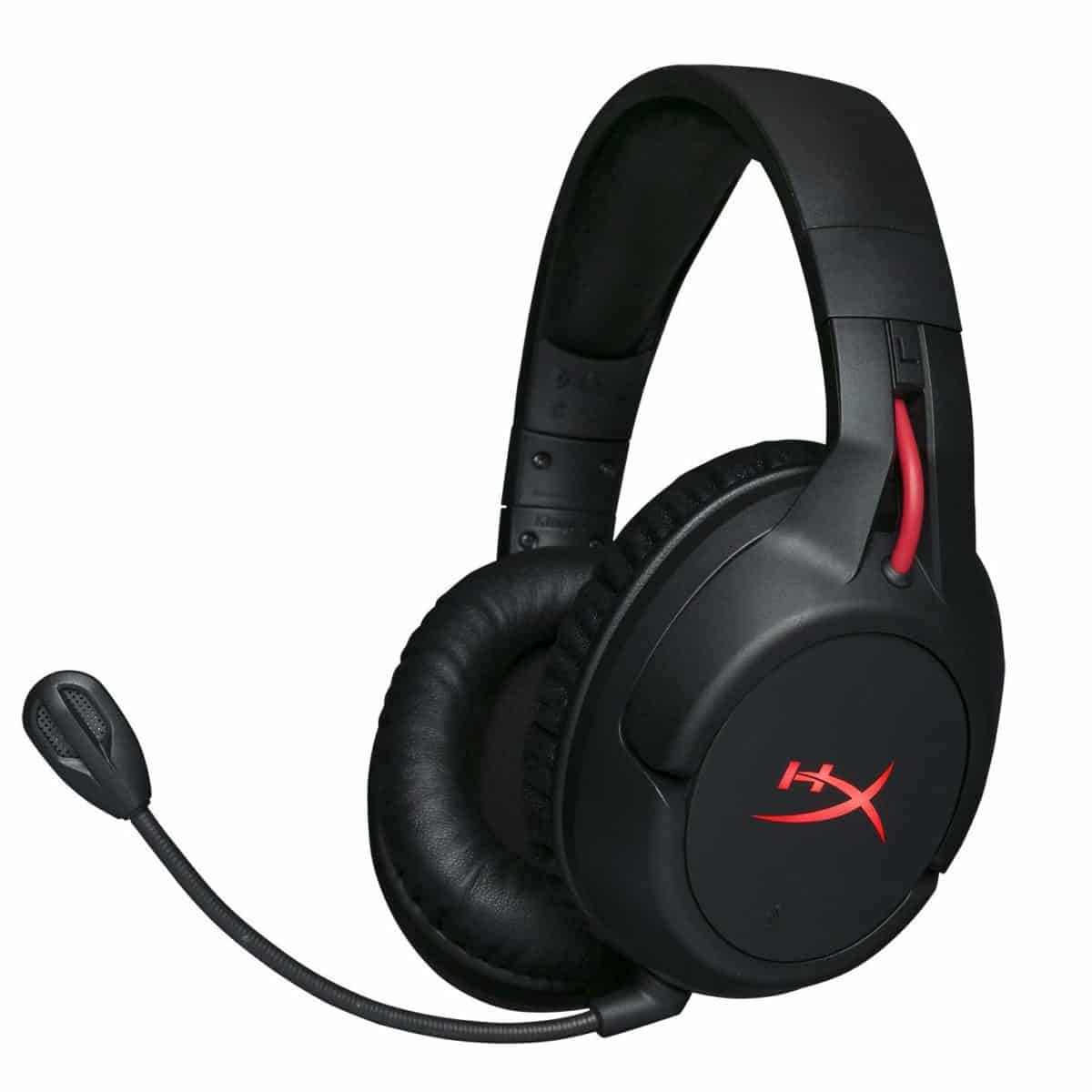 What would a best headsets guide be without HyperX?

The design is classic of HyperX and comes in a cool black and red theme, as you'd expect. I used these headphones for a couple of weeks and really enjoyed the comfort, certainly one of the more comfortable budget headsets I've tested. You get memory-foam earcups with this headset and a very robust adjustable steel slider to get the absolute perfect fit.

Sound quality is pretty decent, and I could pinpoint enemies while playing FPS with considerable ease. I would say the bass is a little much, but for under $100, we'll let them off. The microphone sounded great, but I wouldn't count on it lasting the test of time; it doesn't feel incredibly robust if truth be told.

The wireless connection was good, and I didn't experience too many latency issues either - nothing that was noticeable anyway.

As far as sub $100 headset's go, you'll struggle to find anything out there that is going to produce similar levels of performance as the HyperX Cloud Flight does. A great, all-round headset. 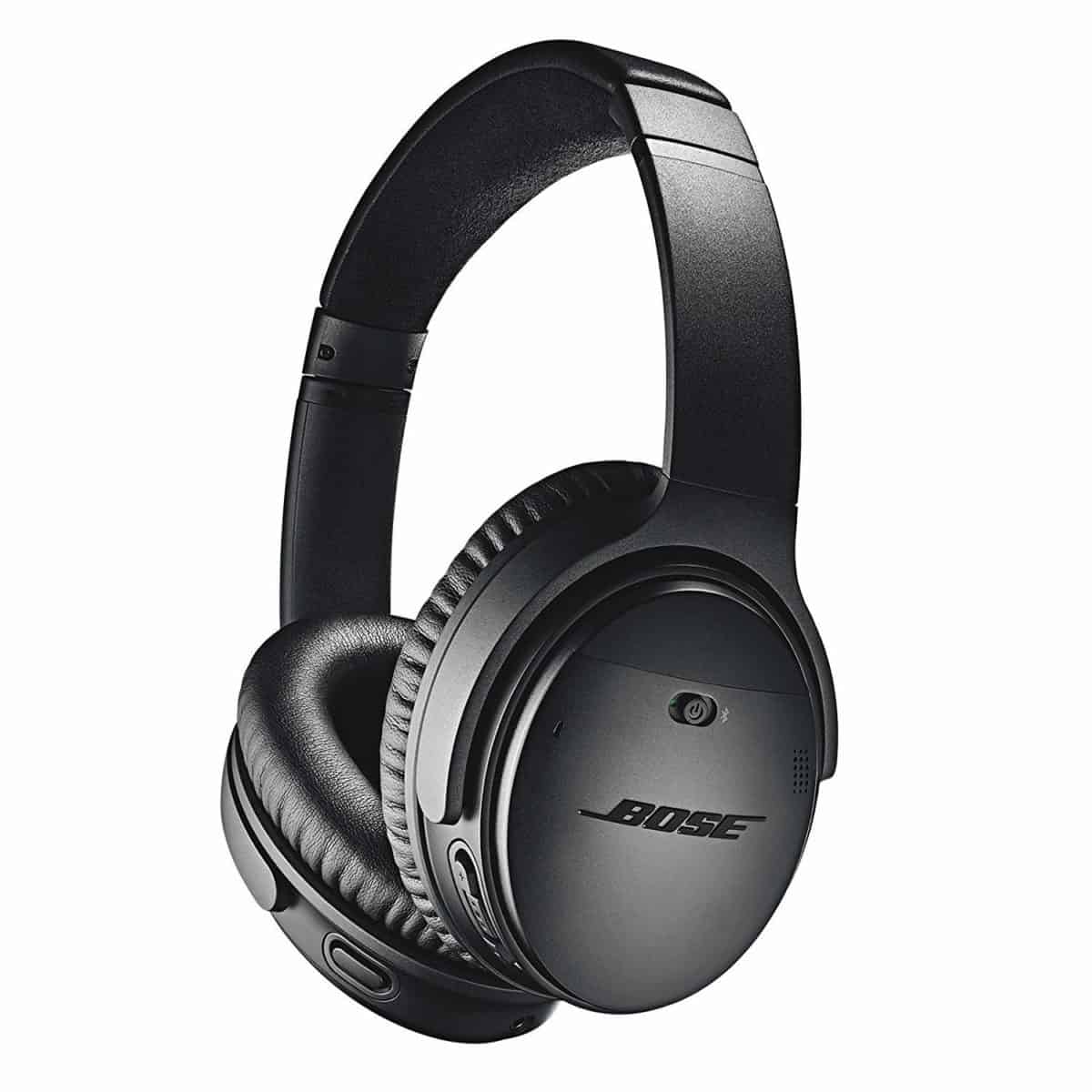 I have personally owned a pair of Bose QuietComfort 35’s for almost two years now and seriously can not recommend them enough. If you’re looking for a quality headset that provides excellent sound quality and superior comfort, then the QCs are precisely what you need.

The sound is one of the standout qualities. They provide a fantastic and utterly immersive experience when paired with the noise cancellation feature. The noise cancellation can be activated by using the switch on the side of the headphones for on the fly usage. I was really impressed at first with how much noise these headphones blocked out, especially when not playing games or audio.

The design is sleek and stylish while providing excellent stability when in use. I use these headphones most of the time and never fear they might fly off. They aren’t screwed to my head like a vice, either.  The headphones are made using the highest quality materials, and I have yet to see any real degradation show from using them.  They can be used wired or wireless. However, worth noting is that when charging, the headphones can not be used.

You would have to purchase a standalone mic to use alongside these when gaming, but like many Twitch and competitive gamers, that proves to be much more effective.

It was a tough ask compiling this list of best wireless gaming headsets because there are so many different headsets to choose from. However, I feel the team did a great job of finding the best headsets in their specific categories.

Let us know by leaving a comment in the comments section below, and we'll reply as soon as we can.

The Best Xbox One Headsets For 2020