Home Blog How To PC Building Tips How to Update BIOS 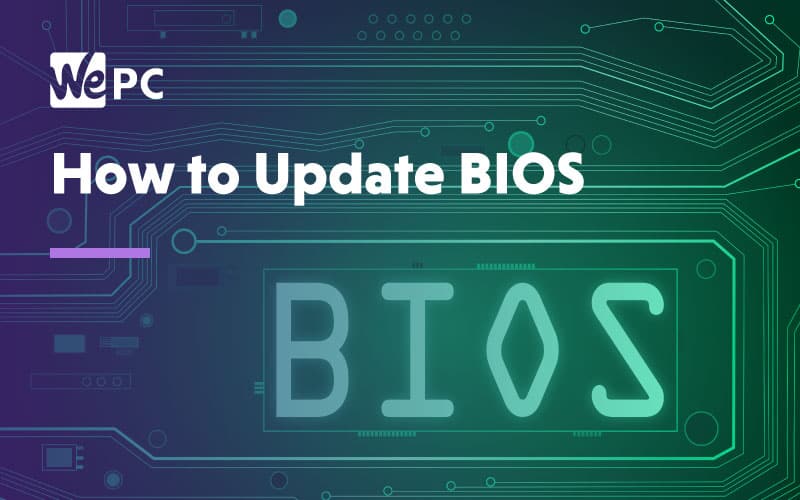 The BIOS can be a daunting place to venture into if you aren't fully trained on the ins and outs of its capabilities. Most people think of the BIOS as an overclocking playground which is only utilized by the most well-educated computer dudes. And for the most part, this would be true.

However, the BIOS is much more than that...

What Exactly Does The BIOS Do?

The BIOS, for those who aren't aware, is your computer's "Basic Input/Output System". It lives in a small chip on your motherboard and is tasked with managing the most basic of instructions which allows your computer to boot into the operating system. It doesn't just power your PC though, it also helps protect it and makes sure everything is running efficiently.

The BIOS chip also initializes the other components upon start-up. The CPU, GPU, motherboard all rely on the BIOS to get things up and running. A few years ago, motherboard manufacturers decided to replace the old school BIOS with a more intuitive interface which would be known as the UEFI. Most people still call it the BIOS to this day as it's a more well-known term.

That being said, now and again, manufacturers will release a BIOS update for one of their specific motherboards. They do this to fix common bugs, make sure the motherboard is compatible with new hardware (strictly CPUs), and a bunch of other reasons that we will touch upon later.

This article is going to walk you through exactly how to update your motherboards BIOS in a simple and easy-to-understand way. We're going to explain how to check what BIOS version you already have, how to update the BIOS in multiple ways, and BIOS updates for new builds.

Let's jump right into it.

How To Check Your BIOS Version

At this point, you're probably asking yourself a number of different questions. One of which might be, how do I know whether my BIOS needs updating? It's a very common question and one that can be answered with relative ease.

The easiest way is to first, check what BIOS version your motherboard is currently running. You can do this in several different ways. Below are the easiest methods.

How to check your BIOS in BIOS How to check your BIOS in Command Prompt

If you don't feel comfortable entering into the BIOS, there are other ways of checking what BIOS version you are running. The command prompt is a great place to start.

This method of checking the BIOS is done inside the operating system. Follow these steps to check your BIOS version in the command prompt: 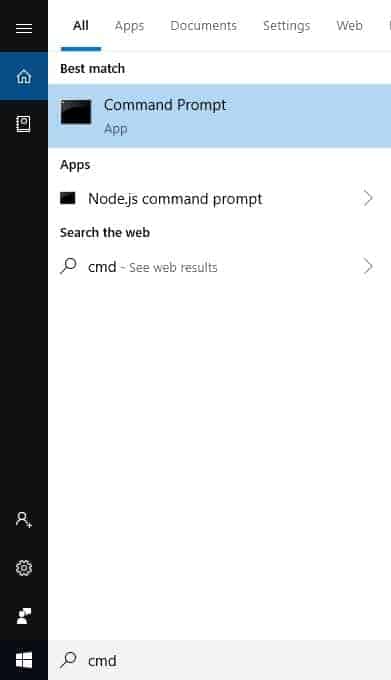 2. Once the command prompt has loaded, copy and paste the following command into the prompt and click enter

3. Underneath SMBIOSBIOSVersion, you will see the BIOS version you are currently running. In my scenario, we are running the 0802 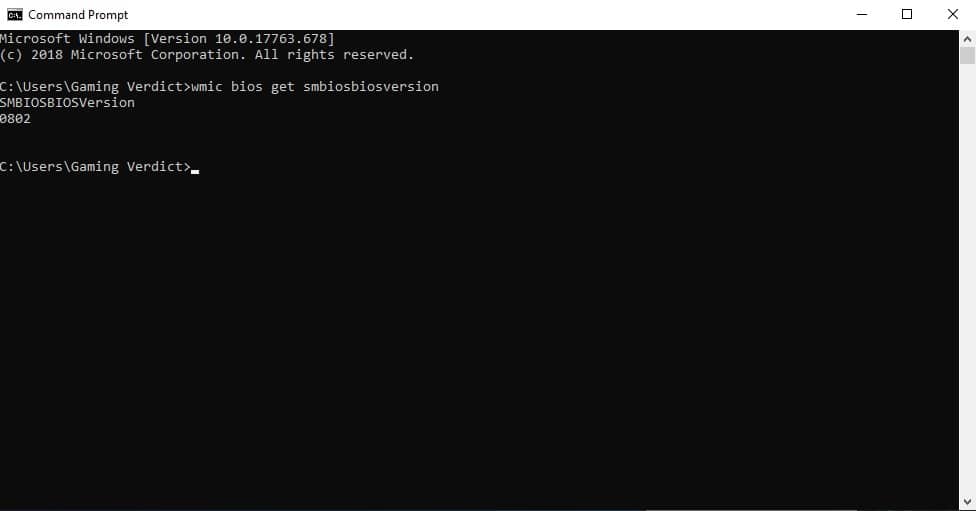 How to check your BIOS in System Information

Another very simple method of finding out what BIOS version your motherboard is running is to check in the system information. You can do this by following these steps:

2. In Run, type the following command and click OK 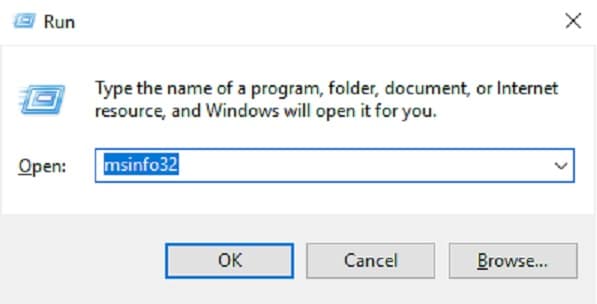 3. This command will take you to the System Information window. In here, you will be able to find a tonne of information on your PC. In this case, we are looking for the BIOS Version. You can find this by scrolling to the BIOS Version/Date Item. See image below 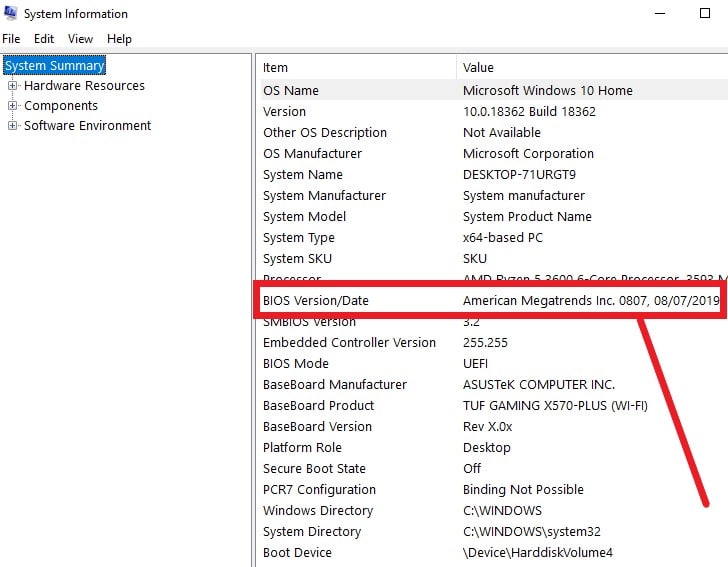 Checking if a New BIOS Version is Available

Once you have established what BIOS version your motherboard is running, the next step is to find out whether your board is up-to-date with the latest version.

The easiest way of doing this is by checking with the manufacturer. By this, I mean, going to their website and finding your motherboard in their products list, going to support and checking the BIOS section to see if yours is the latest. If the BIOS version you are running is not at the top of their list, then your BIOS is out-of-date.

Reasons Why You Should Update BIOS

Before physically updating your BIOS, it's definitely worth knowing the reasons why you should keep it up-to-date. We did touch upon those reasons earlier, but to reiterate, we will outline those reasons again.

Another common reason why a manufacturer will release a BIOS update is to allow upwards compatibility with newer technology. Specifically CPUs. Just take the new Ryzen 3rd Gen CPUs as a prime example. They are compatible with 300 and 400 series motherboards. However, to attain that compatibility, you must update the BIOS.

BIOS Update for a New Build

AMD has recently taught a lot of people a very valuable lesson. You must always check the compatibility of your components before purchasing a new build, especially when new hardware has just been released. 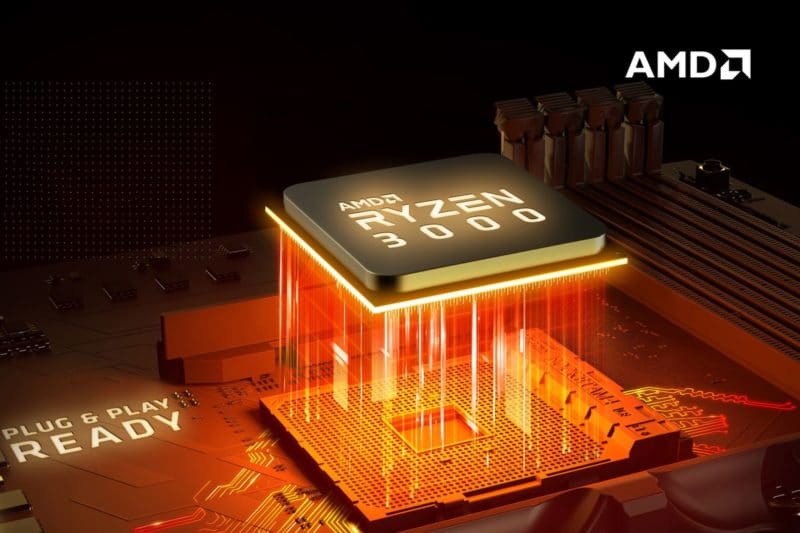 When AMD released their new Ryzen 3rd Gen CPUs, everyone flocked to grab one as they promised hugely impressive performance stats at a price point below their rivals. However, what some people did not plan for, was their new CPUs not working with their old 300/400 series motherboards. Forums were flooded with questions asking how to get their new chips working with their old boards. The answer was a simple BIOS update.

It's one of the main reasons why manufacturers release BIOS updates and a very important one for those consumers purchasing Ryzen.

Now that you understand a little about what the BIOS does, and what the updates offer, it's time to show you exactly how to update the BIOS.

For this, you will need the internet and a USB flash drive. Let's begin. You can do this by going to the manufacturer's website and searching for your motherboard. Once you have found your motherboard, select the "Support" tab and find the "BIOS" section. If your BIOS version is outdated, simply download the new BIOS version and save to desktop. Once the BIOS file has downloaded, you're going to want to unzip the file directly onto your USB flash drive. Do this by right-clicking the BIOS update and selecting the "unzip" option. If this option is not available, you may have to download software to achieve this step. Step 3: Reboot your computer and enter the BIOS menu

Now that you have the file on your USB flash drive, it's now time to enter the BIOS menu and install the update. Do this by first, restarting the computer. When the PC is loading up, right at the start, tap the dedicated BIOS key for your motherboard until it enters you into BIOS. It is usually DEL/F2 For our particular motherboard, we had to enter into the advanced tools section. Usually, this is the F7 key on most motherboards. Inside advanced, you should find an option to launch a flash update. On ASUS boards, it's called the "ASUS EZ Flash 3 Utility". At this stage, you must select what drive the BIOS will use to update from. Select the Flash drive or "storage device". If you have selected the correct drive, you should see the BIOS update file you downloaded earlier. Select the file by double-clicking it. Your BIOS will ask you whether or not you want to load this file, say yes to start the update process. Once the BIOS has finished updating you will be prompted with a message. At this point, you will be asked to click, OK, and your system will restart.

Upon restarting, your system may ask you to enter into the BIOS and run setup. All this requires is for you to re-enter the BIOS and restart the system again. I would recommend at this point to run optimized default settings.

Let the PC restart, and it should boot into your operating system. And there you have it, the comprehensive guide on how to update your BIOS.

Some BIOS menus may differ depending on the brand, but as a rough guide, this will work for almost any board. The board we updated was the ASUS TUF x570 Gaming PLUS WIFI. It took approximately 10 minutes from start to finish.

If you have any questions regarding BIOS or need help updating it, feel free to drop us a message in the comments section below. We will get back to you as soon as we can!

How To Pimp Your PC