Examining the latest Apple M1 Pro chip and putting it up against an equivalent Intel Core i5 CPU. 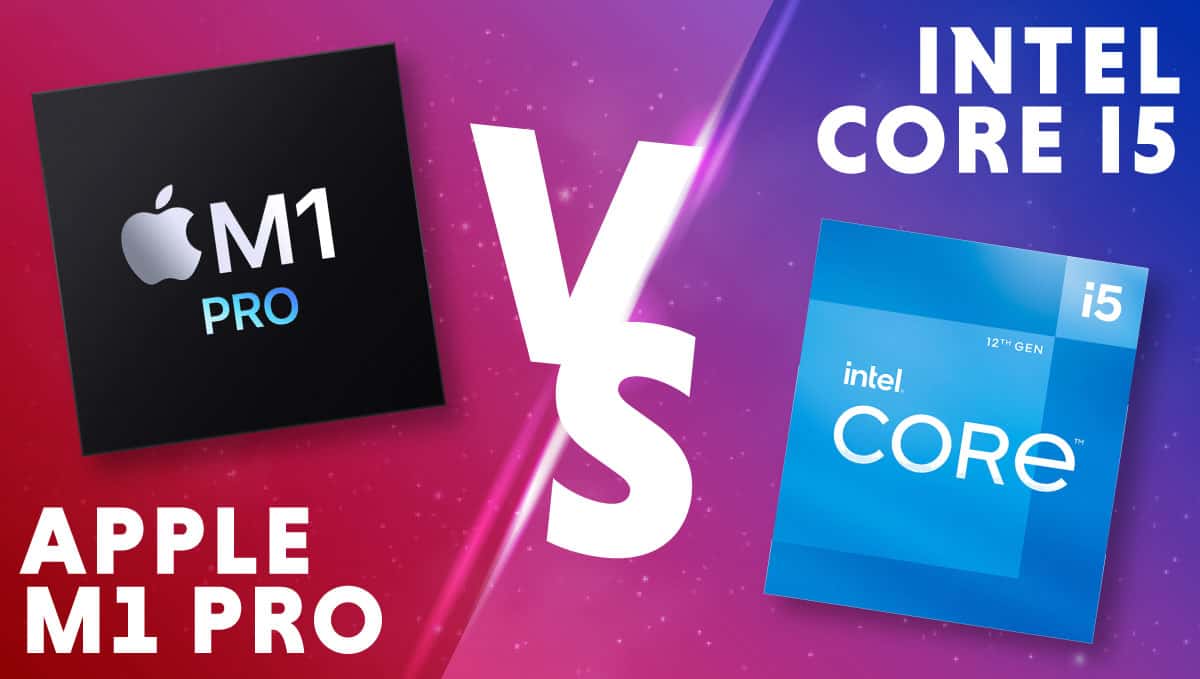 Apple M1 Pro VS Intel Core i5, which is better? When you think of Apple you really don’t think about CPUs, you might think about iPads, iMacs, and iPhones alike, but the fact of the matter is that all of these products need a CPU to function. The Apple M1 chip was first introduced in November 2020, and was designed by Apple but built by TSMC. The M1 Pro chip, however, was introduced later on in October 2021.

Today, the apple M1 Pro chip is a pretty formidable contender in terms of performance and efficiency, But how exactly does it stack up against a comparable Intel i5 CPU?

M1 Pro and its variants

The Apple M1 Pro has many variants or ‘iterations’, much like Intel has many versions of its i5 CPUs.

There are a few main differences between the versions of the M1 chip, most notably the changes in core count, GPU core count, and architecture.

For today’s article, we’re going to focus on the M1 Pro and the differences it has compared to Intel core CPUs.

The apple M1 Pro has two variants within itself but is fundamentally a single-threaded CPU built upon the 5nm manufacturing process. The M1 Pro features ARMs LITTLE.big hybrid architecture, Much like Intel’s latest 12th Generation CPUs, to produce variants that contain either 8 cores (6+2) or 10 cores (8+2).

The performance cores have a larger presence inside the M1 chips, always being the larger number. The lesser Efficiency cores are usually limited to two per chip. The way LITTLE.big architecture works within the M1 chip is exactly the way it functions within Intel CPUs.

Splitting cores using ARM’s LITTLE.big technology is a genius way to squeeze some extra efficiency out of your CPU.

In the case of Windows, the operating system allocates tasks to either E-cores or P-cores based on a pre-scan of an instruction set by a task scheduler before it hits a CPU core. It saves power by not running the heavy P-cores on tasks that don’t require a lot of processing power.

Back to the M1 Pro

The lack of hyperthreading for the M1’s performance cores would offer a single core advantage if the clock speed was high enough. This is because the physical CPU core wouldn’t have to share any resources with the supporting thread, causing both the core and thread to slow down due to inefficient resource allocations.

Most operating systems have utilization optimizations to prevent this from being an issue, but it still is in some cases.

The Apple M1 Pro’s core speed does leave a little to be desired over some of the higher-end models of CPUs. The maximum performance core speed is set at 3.2GHz, and the max for efficiency cores is 2.0GHz.

You may notice that these clock speeds are significantly lower than what we’re used to seeing in this day and age and there’s a reason for that.

Apple has complete and utter control over its own technology, we realize that this is a redundant saying as nearly all companies do. However, Apple (not unlike games consoles) can tailor-make applications and operating systems specific to the limited number of hardware components apple designs.

This means that Apple can line-by-line code almost perfect interactions between operating systems, programs, and hardware. This is something not possible with Intel for example as the possible combination of operating systems, hardware, and programs an intel CPU can be included in runs into very very large numbers. Because of this, Intel cannot babysit each interaction to make sure it’s as efficient as possible, this is why some CPUs work better on some operating systems or with certain hardware.

It’s these lower clock speeds that allow the latest portable Apple products to run for so long on single charges whilst retaining high-performance values.

Intel i5 and its variants

Intel Core i5 processors have many in their family. There are too many to list here, but we have a table full of commercially available i5 desktop CPUs within Intel’s 12th Generation. This means that if you wanted to go out and buy one of these CPUs as is, then you may.

The latest and greatest Intel i5 CPU is the i5-12600K. The 12600K uses a lot of the same technology as the M1 Pro, it is built upon a slightly larger 10nm architecture, but still uses ARMs LITTLE.big technology to split its cores.

The core i5 12600K sports 10 cores and 16 threads, that’s right, we have hyperthreading this time around. Hyperthreading provides both advantages and disadvantages that we’ll get to soon, but the 12600K consists of six performance cores and four efficiency cores.

None of the efficiency cores are hyperthreaded, but the performance cores are, totaling the strange number of 16 threads. AMD teaches us that if a CPU is hyperthreaded (multithreaded to those AMD users) then a CPU will have double the number of threads as it will CPU cores. This is because AMD CPUs do not use split-core technology, all of AMD’s CPU cores are identical.

So, looking at the number of threads a LITTLE.big technology-based CPU has, you would be forgiven for thinking that the numbers are a little odd.

What is multithreading? (hyperthreading)

SMT (Simultaneous Multithreading) is a way to utilize parts of the CPU that would be completely inactive otherwise. How SMT works is complicated – put basically, the feature allows every CPU core to perform an additional instruction while waiting for an instruction to finish in another thread.

This is where we get the ‘simultaneous’ from in Simultaneous Multithreading. The CPU can now utilize parts of itself that would be otherwise doing nothing at that moment.

When SMT is enabled, the operating system (OS) sees the processor as having double the number of cores. Operating systems see this accumulation of cores and threads and label them all as Logical Processors. They are not all the same, however, despite being seen as such.

In reality, all these extra threads only provide about a 50%-60% performance uplift in a best-case scenario, where a specific application can split the load on the CPU up evenly and this is rarely the case. Even so, threads have to share their resources with the physical CPU cores and are slower as a result.

The inclusion of multithreading means the CPU can output a little more processing power whilst consuming the same physical footprint. However, as we explained before, multithreading comes with its disadvantages in regard to congestion and resource allocation.

With the 12600K being designed for a wider platform, along with other desktops CPUs, it has to have a higher clock speed to compensate for the inefficiencies that supporting a wide general platform brings.

There is one glaring issue with this question, especially if you’re looking for a new CPU. If you weren’t aware already, you cannot buy an Apple M1 CPU. Apple M1 CPUs and all of their variants are exclusively available within Apple products alone.

Due to the fact that the M1 chips are tailor-made for Mac OS, they will most likely perform terribly in none Mac OS settings.

If you want an Apple M1 CPU then you must buy an Apple product containing one, and considering that most of the products containing M1 Pro chips can cost thousands – we think Intel is probably a better choice, just from a common-sense aspect.

The apple M1 Pro is great at what it does but only in its own environment, if you plucked it from its cushy tailor-made conditions it probably wouldn’t fare very well against something like the 12600K.

We know that you can get Apple systems containing Intel processors, in this case, the opposite is true. The M1 Pro chip will have an advantage within Apple OS as again it’s been designed for it. Unfortunately, the M1 just can’t compete with the power of the 12600K, this CPU has 16 more threads and is clocked much higher. The 12600K will make short work of the M1 Pro in every aspect except power efficiency.

The Apple M1 Pro is a brilliant CPU in Apple’s arsenal, but good luck building with one. The 12600K in simple terms is a better CPU, and in all honesty, why do you want a Mac? What can it do that a much cheaper, non-proprietary Windows machine can’t?

Windows will always be our favorite platform but we like to remain objective. Apple products are some of the best productivity and creativity-focused machines available, but can you justify the price tag? Between that huge price tag and Apple’s petty response to the “your right to repair” debacle in recent days, we just can’t recommend a Mac over the joys of building your own PC

In terms of price and performance, the Intel i5 wins every time. 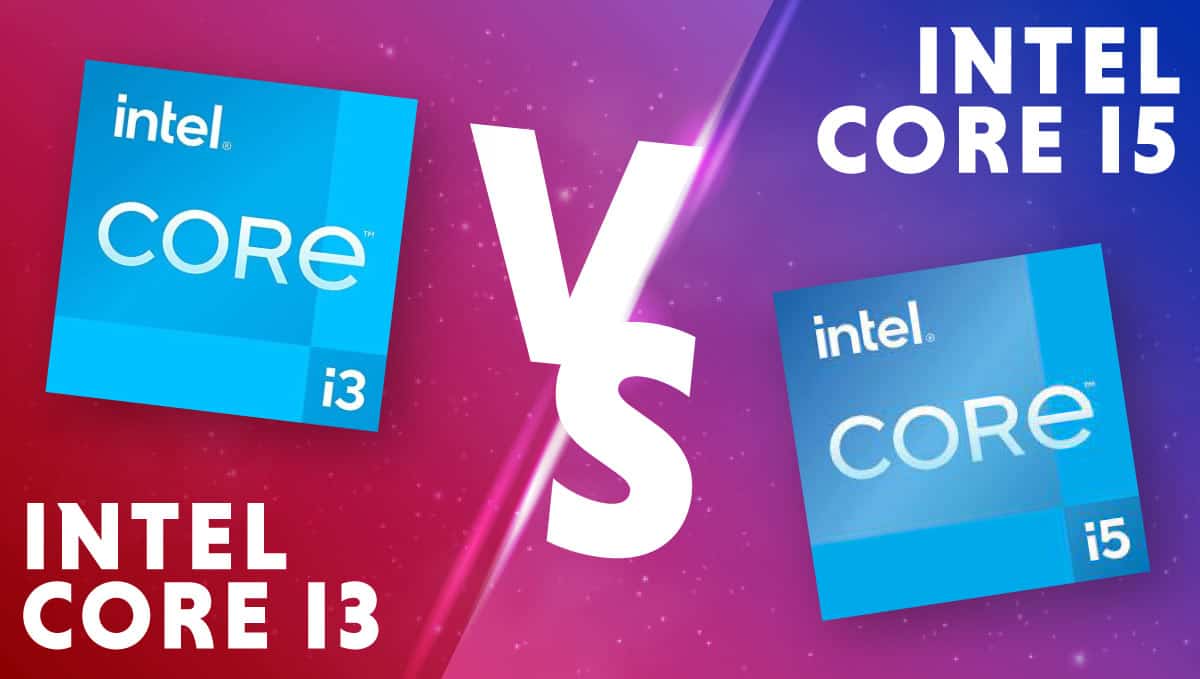 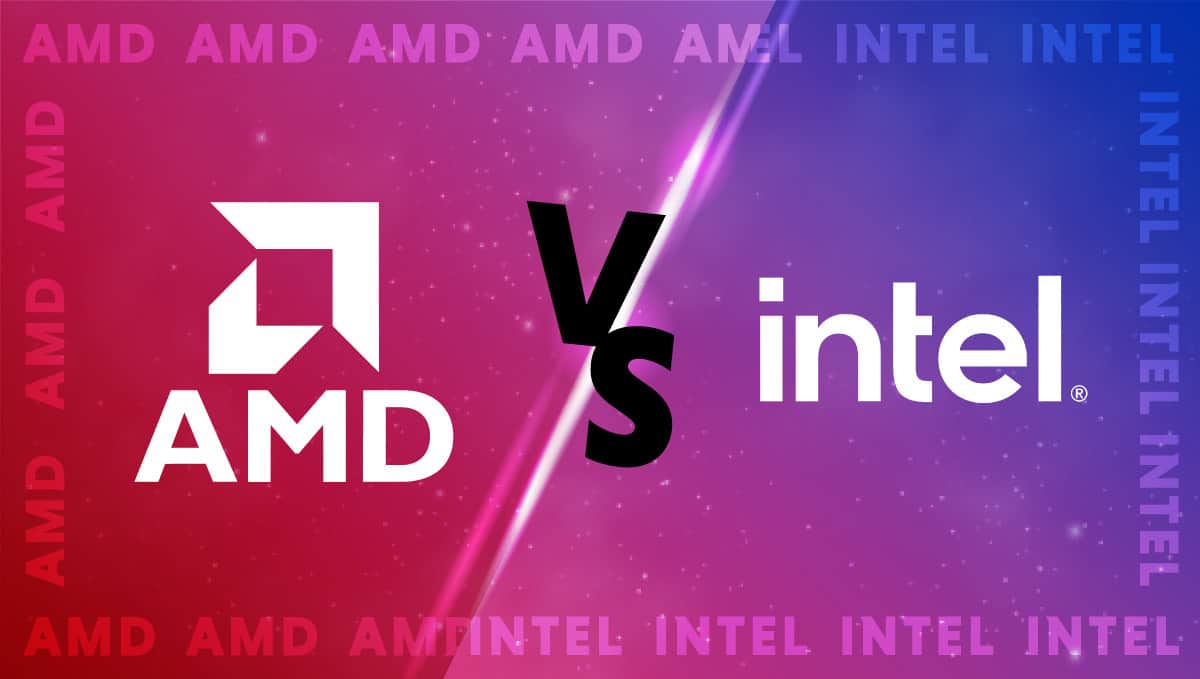 AMD vs Intel 2022: Which Should be Your First Gaming CPU? 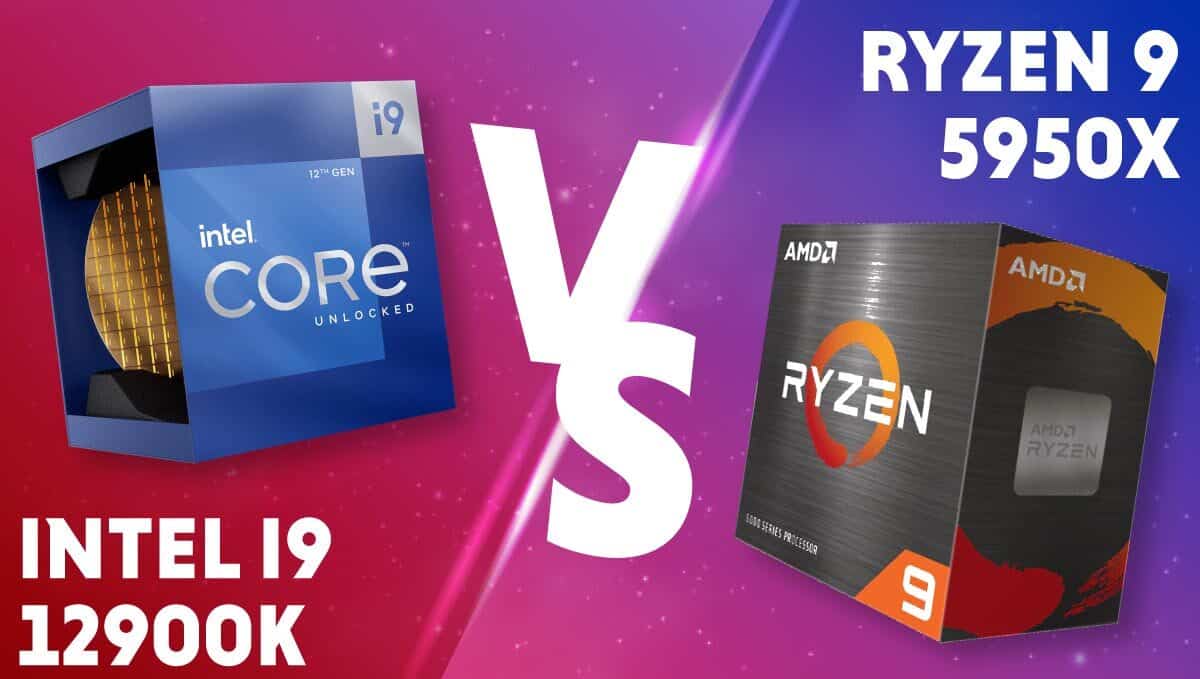 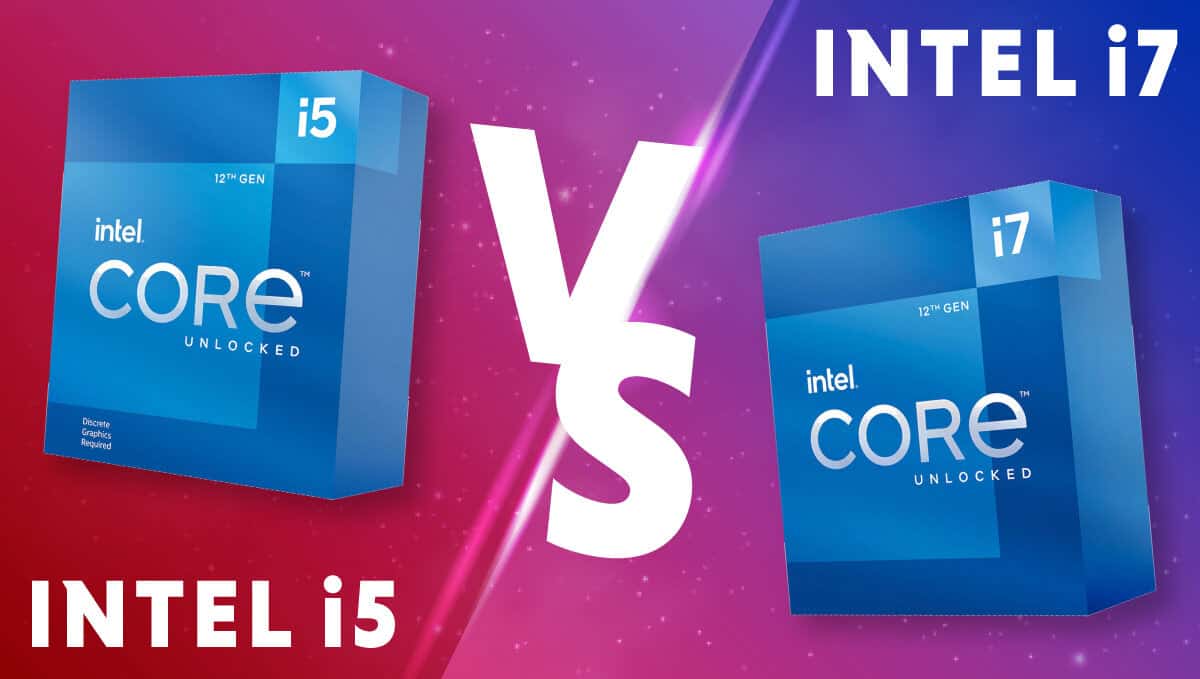 Jack has been interested in computers and tech since 10 years old when he decided to dismantle his PC to see how it worked. Ever since Jack has had a passion for IT and gaming beyond any other. He loves the data and testing process and allowing himself to take an analytical and technical approach to PC hardware. He's even gone as far as getting educated in cyber security.

AMD vs Intel 2022: Which Should be Your First Gaming CPU?