We compare the 5800X and the 5800X3D CPUs from AMD including performance, specs and price. 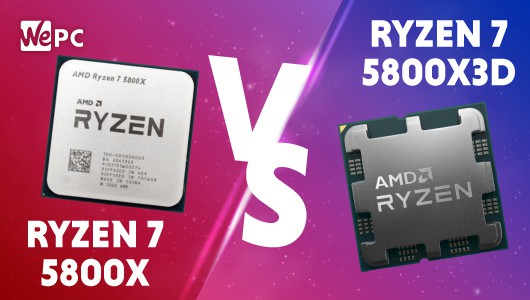 AMD 5800X vs 5800X3D which is better? AMD announced that it would be releasing a rehashed Zen 3 desktop CPU last year. No one really knew what this meant until AMD announced it later in the year and just recently added the full specifications of this solitary desktop CPU to its website. The AMD Ryzen 7 5800X3D is a brand new 5000 series CPU from AMD, promising to perform strides above its flagship Ryzen 9 5900X and Intel’s 12th generation 12900k in some cases. But is it worth it? With a price confirmation yet to be seen, does the performance difference warrant an upgrade? We stack it up against the already-released Ryzen 7 5800X. in our Ryzen 7 5800X VS Ryzen 7 5800X3D article.

If you want to find out more about the 5800X3D, here’s our ‘5800X3D where to buy‘ page that features all the information you’ll ever need surrounding the new AM4 flagship.

Alternatively, you can check out the latest AM5 and Zen 4 pages if you’re looking for something a little more ‘next-gen’.

Both CPUs are incredibly powerful 7th series Ryzen CPUs and will suit your gaming needs perfectly, but how does 3D cache (the main difference between the two CPUs) factor into all of this? And what even is 3D cache?

To understand the difference between 2D and 3D cache it’s important we know what cache is and what it does for a CPU.

A CPU’s cache is essentially an extension of the system’s RAM and it acts as backup storage for memory transference. The cache is arranged primarily into three levels in today’s CPU architecture – there was a fourth level but technological advancements of the last decade have negated the need for L4 cache in most cases. These cache levels are arranged as follows:

CPU cache levels are also arranged in numerical order from largest to smallest, with L3 cache being the largest but slowest and L1 being the smallest but fastest. Frequent instructions are stored in cache from RAM for faster access and execution speeds.

2D cache (the standard cache that comes with today’s CPUs) is stacked laterally with smaller silicone dies allowing for more space for each cache chiplet. The issue with each cache chiplet being laid across one layer of chiplets is the massive surface area requirements, severely limiting the number of chiplets you can fit into a certain footprint. But with a 3D cache that all changes.

The 3D cache is not stacked laterally but vertically (thanks to new 3D printing technology) hence the term 3D cache. This drastically increases the number of chiplets you can cram into an area of any given size, thus resulting in larger cache capacities without sacrificing access speeds. The vertical stacking allows AMD to achieve the massive 192MB total L3 cache with a total access speed of 2TB/s in its up and coming 5800X3D CPUs. The massive capacity is achieved by layering two layers of 48MB cache on top of each other.

It’s not just cache that can benefit from 3D stacking technology. You can already see storage taking advantage with V-nand and it’s theoretically viable in applications in CPU and GPU cores too.

The Ryzen 7 5800x is the top-of-the-line Ryzen 7 CPU currently on the market. Released on November 5 2020, this CPU performs extremely well in its price bracket, smashing its predecessor, the Ryzen 7 3800x, in terms of performance.

The Ryxen 7 5800X3D is a brand new CPU on the new Zen 3 rehash. The 5800X3D will be bringing with it a 3D cache to help vastly improve the cache capacity whilst retaining access speeds. We have seen projections against AMD and Intel’s current flagship CPUs (5900X and 12900K) and from where we sit it looks like a favourable contender.

Here we will compare the Ryzen 7 5800X and the Ryzen 7 5800X3D head-to-head and analyze the on-paper specifications of the two. This should help you make an informed choice when deciding whether to upgrade to the new 3D cache version of the pinnacle Ryzen 7 CPU.

Both of the CPUs support SMT (Simultaneous Multithreading). This is AMD’s version of Intel’s Hyperthreading. This is a technology that allows one CPU core to process and execute two instructions simultaneously. This means that the operating system is able to see and utilize your CPU as if it had double the number of physical cores. The collection of cores and threads are labelled logical processors by operating systems.

These threads are known as V-cores and are virtual, so-named because they do not physically exist or occupy space on the CPU die. These virtual cores have to share resources with the physical cores and threads suffer slower processing speeds as a result.

If you want to know more about SMT you can read our in-depth feature on SMT.

Not surprisingly, a higher clock speed is superior. However, not all clock speeds are created equal. We will now attempt to simply explain what we mean by this although we did leave many components out of the explanation this serves as a simple enough baseline.

Many factors can affect the validity of clock speed. One of these is ‘nm process’, which refers to the size of the transistors that make up the logical components of a CPU. There are billions of these microscopic transistors all capable of yes/no outputs, which collectively equate to more complex logical instruction executions.

7nm transistors are much smaller than 10nm transistors for example. And this is what we meant when we said not all clock speed is created equal.

Clock speed refers to how many cycles a CPU can perform per second not how many instructions can be executed per second. This is another measurement known as IPC (instructions per clock).

If you still don’t understand, think of it like this.

The two buses are travelling down the road towards the finish line at different speeds – the bus with 100 adults is going at 50mph, the other one is travelling at 45mph.

The bus with 100 adults in arrives first, but while the other trails behind, it delivers more people at once, making it the more efficient journey.

Just because one bus is faster, it doesn’t mean it’s better at delivering things.

The Ryzen 5 5800X3D has much more L3 cache and the same amount of L2 and L1 cache capacity. However, the cache architecture is based on a vertical composition allowing for more cache capacity and greater access speeds.

We outlined the differences in 2D and 3D in terms of the Ryzen 7 5800X VS Ryzen 7 5800X3D caches previously on the page. The more cache you have the better as it serves as a ‘bridge’ of sorts between CPU and RAM allowing for faster and more efficient access to information stored in the system’s memory.

A CPUs cache is segregated and presented in three levels.

Level one cache is located closest to the CPU’s cores and has blisteringly fast access speeds but also the smallest capacity. This is reserved for vital data that is most frequently accessed by the CPU

Level two cache is a nice middle ground, with median capacity and the median speed, reserved for the less vital data, but it is still integral and ideal that the CPU has fast access to level two cache.

Level three cache is where most of your frequently accessed data is stored such as programs and execution paths. This has the largest capacity in comparison to the other two levels but is also many magnitudes slower.

Both of the CPUs under the microscope today have a TDP of 105W.

TDP stands for thermal design power and is the maximum amount of thermal energy a CPU can produce under maximum load conditions. Thermal energy is a fancy way in physics to describe heat. Both of these CPUs output 105W of heat under full load.

If you wish to counteract this TDP and keep your CPU sitting comfortably in defined safe operating temperatures, you need to ensure you have a cooler capable of dissipating a greater amount of thermal energy than your CPU produces.

Most coolers will manage to dissipate 105W, but the better cooler you have the more headroom you leave for overclocking as TDP increases exponentially when even the smallest of overclocks are applied.

Both our CPUs are based on the AM4 socket.

AM4 is the current socket of choice featuring PGA (pin grid array) technology but with the up and coming AM5 socket, that’s all about to change. AMD has kept the AM4 socket in service for a long time as it’s reliable and well refined, however it has, for the most part, reached the limit of its technological capabilities.

The socket can be thought of as a certain shaped hole – only the CPU matching the socket will fit.

On paper, the 5800X3D takes the win here although it has a slower clock speed overall, and the exact same number of cores and threads. Advancements with 3D cache have pushed it into the lead over even AMD and Intel’s flagship CPUs, by AMD’s own benchmarks.

Even though we don’t have a price yet for the 5800X3D we can safely say that if it launches with an MSRP similar to the MSRP of the 5800X then it’s a definite win as it will offer way more bang for your buck.

With AMD Ryzen 7 5800X3D CPUs shipping out of factories as we speak, we could see CPUs hit the shelves by the end of March, according to Video cardz.

We favour the more powerful 5800X3D in our 5800X vs 5800X3D article only if it’s a similar price to that of the 5800X at launch. This and maybe a few more of its kind will absolutely be the last set of CPUs to hit the AM4 socket and with that comes the realization that this is probably as advanced as AM4 users will get.

With that being said it’s an incredible CPU, featuring pioneering technology never before used for cache or anything CPU related for that matter.
If you’d have asked us a year ago we’d have said that AMD’s 5000 series was probably the last we’d see on AM4 but it keeps surprising us with new technology. The AMD Ryzen 7 5800X3D was certainly a surprise and it’s shaping up to be a very pleasant one. Now you’ve seen our 5800X vs 5800X3D article, you now know how to make an informed decision when deciding between two PC products, comparing price, specs and use case will see you through. 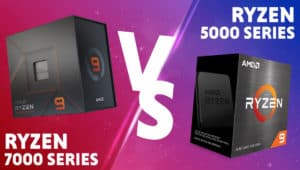 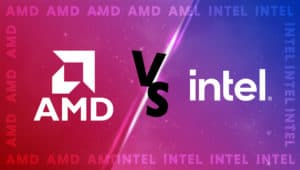 * Updated* AMD vs Intel 2022: Which Should be Your First Gaming CPU? 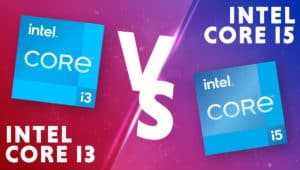 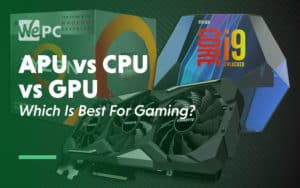 APU vs CPU vs GPU. Which One Is Best For Gaming?