When it comes to PC gaming, there are fewer talked about peripherals than the gaming mouse. Finding a mouse with the perfect balance of accuracy, design, ergonomics, and sensitivity is always a tricky task but what if we threw in sensor type to that list, optical vs laser, which is best? Well, the fact is the vast majority of gaming mice in modern times feature a top optical sensor. The laser sensor took a back seat years ago, with optical sensors being the stronger choice across the board.

A decade ago, the sensor you went for was largely down to preference but it could also be down to the gaming surface you played with. In some regard, laser mice could handle a wider range of surface types and with performance generally being similar, this could sway a lot of people.

Mice have been improving year on year and the sensor inside has been at the front of that change. Optical sensors are now the superior choice when it comes to a mouse illumination source!

Before Optical And Laser Mice

Before accuracy, comfort, and all those pleasant factors you associate with your shiny gaming mouse, we had the mechanical mouse. What? Yep, that’s the mouse with the rubber ball inside you would have to periodically clean all sorts of grime and dirt out of just to load up the contents of that floppy disk.

A mechanical mouse works by detecting whether or not light is present. Within a mechanical mouse, there are two small wheels, one for vertical movement and the other for horizontal. When you move a mechanical mouse the rubber ball spins one of the corresponding wheels inside, and if both are moving at the same time, you get diagonal motion.

When one of these wheels inside moves, it temporarily blocks the beam of light. The mouse will register this lack of light and from which wheel, resulting in your cursor following that direction.

What Is The Difference Between Optical And Laser Mice? 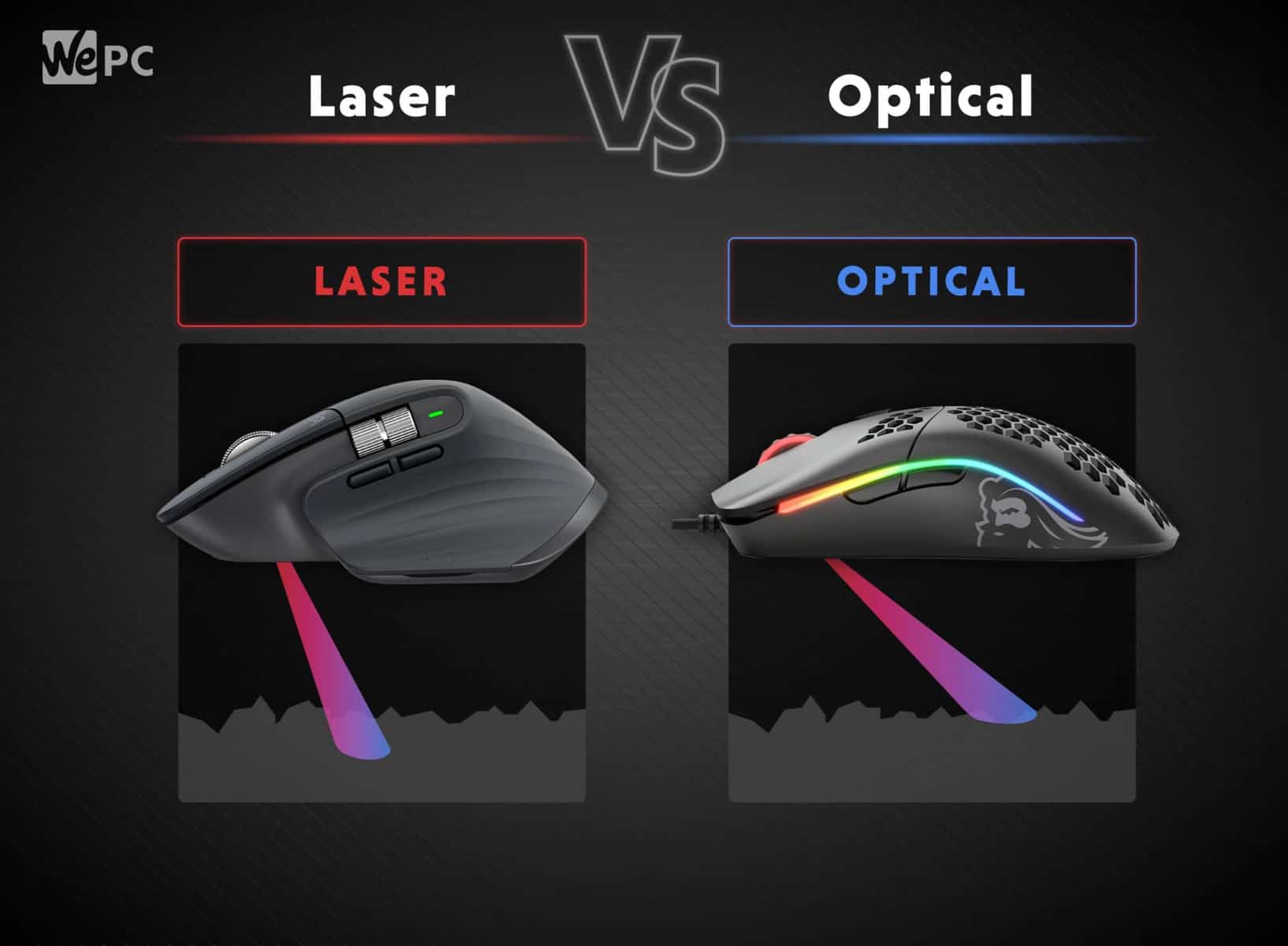 Let’s start this section by slightly contradicting the title, that’s right, all mice are optical in theory. Modern mice are essentially cameras, constantly taking pictures of the underlying surface. These low-resolution cameras taking the pictures are known as CMOS image sensors. The images they take are converted into data for tracking the peripheral’s current location. The CMOS, combined with two lenses and a source of illumination tracks the X and Y axis movements thousands of times a second.

The reason we say all mice are optical is simply because they take pictures. Despite this definition, optical mice rely on an infrared or red LED that casts light onto the surface you are using. The LED is typically installed behind an angled lens, focusing the illumination into a beam. The beam of light bounces off your mouse mat or table, through the magnifying lens and into the CMOS sensor.

The sensor then converts the beam of light into a current, which in turn is then converted into zeros and ones, resulting in more than 10,000 digital images being captured every second. The generate a precise location of the mouse, and the final data is sent to the PC for the placement of your cursor every one to eight milliseconds.

As mentioned above, an optical or laser mouse needs to shine a light in order to track movement. Traditionally, since LED light can’t permeate a surface, optical mice were always best on hard or glossy pads. Of course, recent developments with optical sensors mean they now work on almost any surface but this was how it used to be.

Back then lasers used to do a superior job of permeating a surface and even could be used with glass surfaces thanks to their more powerful beam of light. While this sounds like a positive (and many back in the day thought it was too), laser sensors are more likely to pick up too much information when scanning, making them inaccurate or deviate at high speeds.

Optical Vs. A Laser Mouse, Which Is Best?

So, both methods track the surface with an illumination source but what do you go for optical or laser? The short answer here is almost always going to be optical, especially for gaming but let’s go a little deeper.

A laser can go deeper into the surface texture without damaging anything and picks up on the tiniest of detail which in theory would make it more accurate but, unfortunately, not for tracking. This seems to be the main issue with laser-based mice, they are too accurate and pick up that unwanted information resulting in poor user experience. Jitter, as it is known, is almost entirely irradicated within the optical gaming mice we see today.

You could argue which is best is down to preference or what you plan on using your mouse for but the bottom line is: optical mice rule the roost. The main reason optical mice were championed previously may have just been down to the fact most people sat at their desks own a mouse pad. Overtime, LED-based optical mice have grown from strength to strength and while offering some of the best consistent tracking out there, this type of illumination can track on a wider range of surfaces than before.

Now there is still a place for the laser sensor but it’s mostly for those who wouldn’t bother with a mouse pad. We can assume most gamers will have a mouse pad for consistent gaming and to make sure you don’t damage that desk. People who work from home or on the go may not have a need for the accurate tracking ability of optical mice, they may want something that can work on any surface that may present itself to them that day. In this regard, a laser mouse is perfect thanks to its permeating beam of light.

A while back when Razer was championing their laser sensors and a lot of people (me included) were believing that the higher sensitivity and DPI that came with these products was going to improve our aim. Those foggy days of the past are over and when it comes to gaming you have literally spoilt for choice thanks to every reputable brand sporting a highly capable, reliable sensor.

So when we say Optical Vs. Laser mouse, there is no question that optical wins for gaming and general use with a mouse pad but you could argue there is a niche audience for laser mice too.

So, unless you plan on using that glass table to work on, grab your self a more accurate, affordable, and reliable optical mouse. 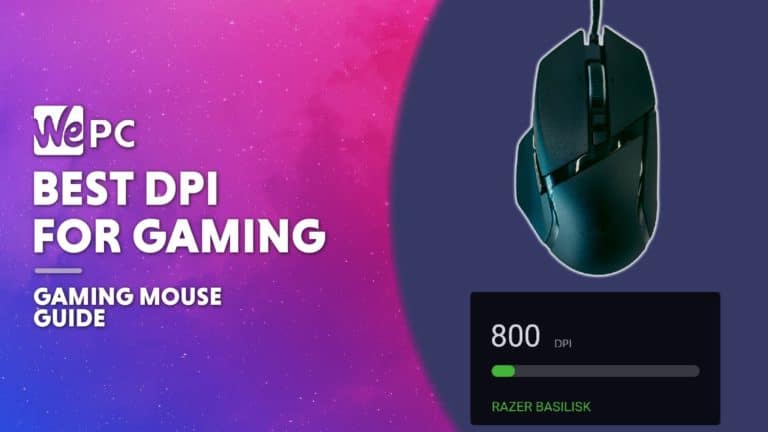 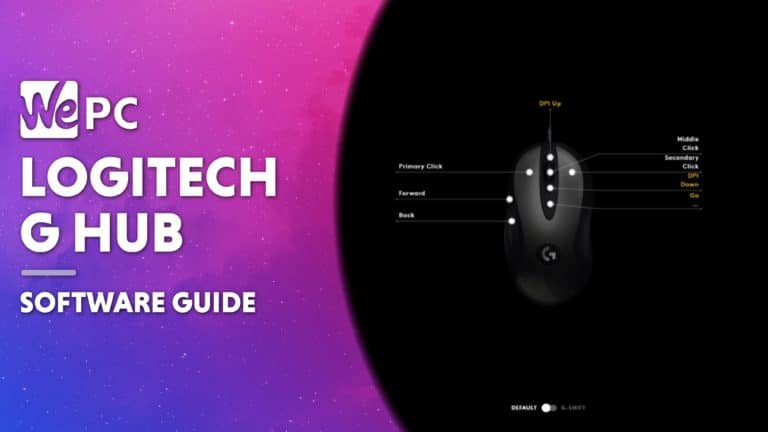